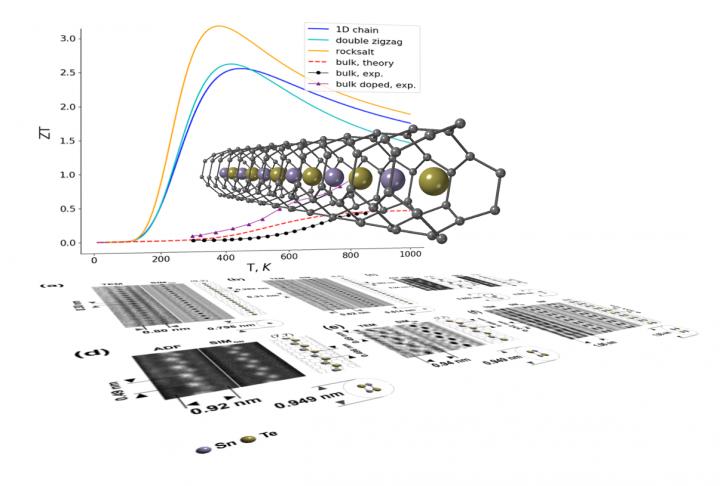 This is a diagram showing one-dimensional nanowires conducting waste heat to electricity.

Waste heat can be converted to electricity more efficiently using one-dimensional nanoscale materials as thin as an atom - ushering a new way of generating sustainable energy - thanks to new research by the University of Warwick.

Led by Drs Andrij Vasylenko, Samuel Marks, Jeremy Sloan and David Quigley from Warwick's Department of Physics, in collaboration with the Universities of Cambridge and Birmingham, the researchers have found that the most effective thermoelectric materials can be realised by shaping them into the thinnest possible nanowires.

Thermoelectric materials harvest waste heat and convert it into electricity - and are much sought-after as a renewable and environmentally friendly sources of energy.

Dr Andrij Vasylenko, from the University of Warwick's Department of Physics and the paper's first author, commented:

The researchers - which included the group of Dr Andrew J. Morris from the University of Birmingham - were investigating the crystallisation of tin telluride in extremely narrow carbon nanotubes used as templates for the formation of these materials in their lowest dimensional form.

In a combined theoretical-experimental research, they were able not only to establish a direct dependence between the size of a template and a resulting structure of a nanowire, but also to demonstrate how this technique can be used for regulation of the thermoelectric efficiency of tin telluride formed into nanowires 1-2 atoms in diameter.

First author Dr Vasylenko is excited about what this research could lead to:

"This opens up an opportunity for creation of a new generation of thermoelectric generators, but also for exploration of alternative candidate materials for thermoelectrics among abundant and non-toxic chemical elements."

With a growing demand for both miniatuarisation and enhanced efficiency of thermoelectrics, nanostructuring offers a viable route for targeting both objectives.

Their results are reported in the journal ACS Nano.