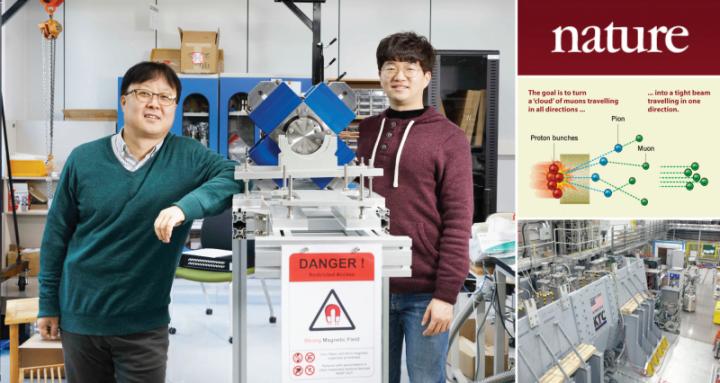 Professor Moses Chung and ChangKyu Sung in the School of Natural Sciences at UNIST were the only Korean researchers who partook in the MICE collaboration.

An international team of researchers, affiliated with UNIST has for the first time succeeded in demonstrating the ionization cooling of muons. Regarded as a major step in being able to create the world's most powerful particle accelerator, this new muon accelerator is expected to provide a better understanding of the fundamental constituents of matter.

This breakthrough has been carried out by the Muon Ionization Cooling Experiment (MICE) collaboration, which includes many UK scientists, as well as Professor Moses Chung and his research team in the School of Natural Sciences at UNIST. Their findings have been published in the online version of Nature on February 5, 2020.

"We have succeeded in realizing muon ionization cooling, one of our greatest challenges associated with developing muon accelerators," says Professor Chung. "Achievement of this is considered especially important, as it could change the paradigm of developing the Lepton Collider that could replace the Neutrino Factory or the Large Hadron Collider (LHC)."

Muons are naturally occurring particles that are generated in the Earth's upper atmosphere by cosmic rays collisions, thus are regarded as a follow-on particle accelerator to replace the LHC. Protons, a type of hardon, are primarily used by the LHC and they partake in strong interactions. Leptons, like the electron and the muon, are not subject to the strong interaction, rather they interact via the weak force.

Muons have an extremely brief lifespan of two millionths of a second. They are produced by smashing a beam of protons into a target. These muons form a diffuse cloud, meaning that they are difficult to accelerate and there is a low chance of them colliding and producing useful interesting physical phenomena. To make the cloud less diffuse, a process known as 'Beam cooling' was suggested. This involves getting the muons closer together and moving in the same direction. However, due to the ultra-short lifespan of muons, it has been impossible to cool the beam with the traditional methods.

To tackle this challenge, the MICE collaboration team succeeded in channelling muons into a small enough volume to be able to study physics in new systems via a method, known as Ionization Cooling, which was previously suggested and developed into theoretically operable schemes in the 1980s.

The results of the experiment, carried out using the MICE muon beam-line at the Science and Technology Facilities Council (STFC) ISIS Neutron and Muon Beam facility on the Harwell Campus in the UK, clearly shows that the phase-space volume occupied by the muon beam can be controlled via the ionization cooling, as predicted by the theory.