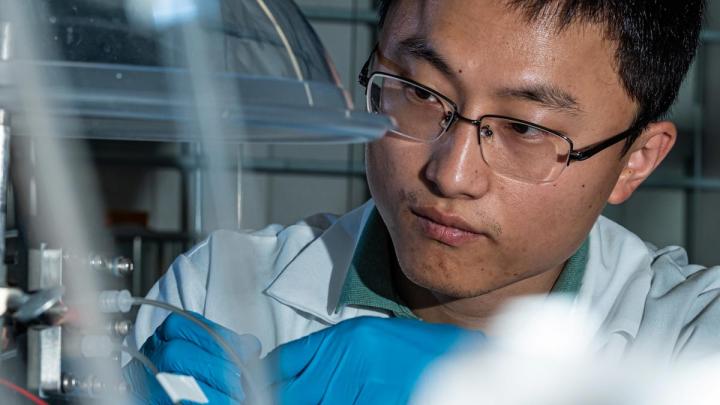 Rice University engineer Haotian Wang has been awarded a four-year, $2 million collaborative grant by the Emerging Frontiers in Research and Innovation program of the National Science Foundation (NSF) to explore how waste carbon dioxide, the bane of Earth's atmosphere, can be directly converted into pure liquid fuels.

The assistant professor and William Marsh Rice Trustee Chair of Chemical and Biomolecular Engineering has proposed the development of a modular electrochemical system that will provide "a sustainable, negative-carbon, low-waste and point-source manufacturing path preferable to traditional large-scale chemical process plants."

Since joining the Rice faculty in 2019, Wang has developed a catalytic reactor that uses carbon dioxide as its feedstock. The NSF grant will address challenges that remain before the renewable strategy can be applied practically on a commercial scale.

"To address these challenges, our project is interdisciplinary," Wang said. "We include experts in catalysts and electrolyzer design, polymer engineering, density functional theory simulations and carbon dioxide capture."

Wang's co-principal investigators are Rafael Verduzco, a Rice professor of chemical and biomolecular engineering; T. Alan Hatton, the Ralph Landau Professor and Director of the David H. Koch School of Chemical Engineering Practice at the Massachusetts Institute of Technology; and Yuanyue Liu, an assistant professor of mechanical engineering at the University of Texas at Austin.

"We intend to build an electrochemical modular system as a platform for a continuous conversion process of simulated flue gas to pure liquid fuels," Wang said. "We address both materials-level design and device-level engineering."

Experiments and simulations will be integrated in each of the project's components, creating what Wang calls "a systematic feedback loop to accelerate design and understanding of carbon dioxide capture and conversion systems tailored for small-scale distributed chemical manufacturing."

Earlier this year, Wang received a three-year, $240,000 research grant from the Houston-based Robert A. Welch Foundation for related research.

"Converting waste carbon dioxide into valuable chemicals and fuels using renewable electricity can distribute the way we produce chemical feedstocks, while making significant contributions to establish a potential anthropogenic carbon loop in the future," he said.