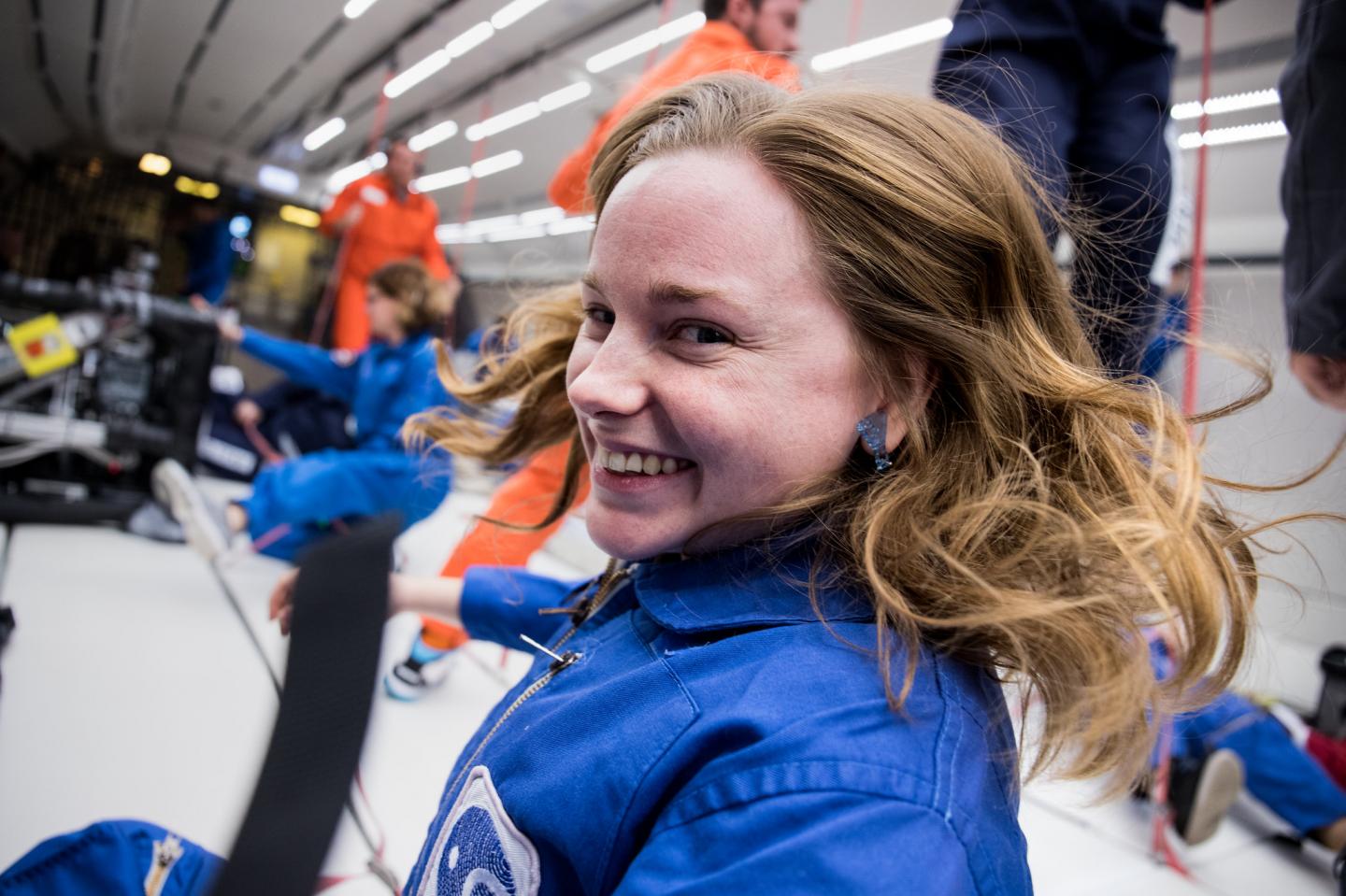 Graphene Flagship researchers during one of the zero-gravity experiments.

Thermal management is essential for satellites and other equipment to perform correctly in space. The difference in temperature between two sides of a satellite, for instance the sides facing towards and away from the sun, can vary by over 200 degrees Celsius. Removing unwanted heat and avoiding equipment failure requires the use of a loop heat pipe to dissipate excess heat.

Loop heat pipes cool electronic devices and instruments by using the heat they generate to evaporate a fluid inside a wick. The wick is traditionally made of porous metal. In the case of this experiment, the wick will be coated in graphene to improve the heat transfer between the electronic units and the fluid.

The work is a collaboration between Graphene Flagship partners the Université Libre de Bruxelles, the University of Cambridge, the National Research Council of Italy (CNR) and industrial partner, Leonardo. Two successful campaigns completed in 2017 showed strong evidence that graphene's thermal properties can improve the efficiency loop heat pipes. This third zero-gravity campaign will test an advanced device at higher technology readiness level, as a further step towards space applications.

"This new parabolic flight experiment is a further step in order to test graphene in space," explained Carlo Iorio, senior researcher at Université Libre de Bruxelles and co-ordinator of the zero-gravity experiments. "In June, the Graphene Flagship will test graphene in a sounding rocket campaign, which will be held in Kiruna in the North of Sweden."

"The rocket campaign will provide our researchers with six minutes of micro gravity. During this time, we will test fundamental aspects of graphene solutions, the same used to prepare the thermal management devices, essential tools for the future of space exploitation," adds Iorio.

"Experimentation in zero-gravity is fundamental to ensure access of new technologies to operational missions in Space. The graphene loop heat pipe is a promising application for Leonardo, a company with wide aerospace expertise, always looking at new ways to improve its products quality through innovation. We are glad the Graphene Flagship is making this possible", stated Marco Molina, Chief Technology Officer of Space line of business at Leonardo.

"Experiments in space require significant investments and extensive planning. They are only possible within long-term collaborations between industry and academia: this is exactly what the Graphene Flagship is all about. The devices were produced with a technique that was initially developed for completely different applications, in electronics. We are now testing this for space applications in the loop heath pipes, thanks to the synergies enabled by the Graphene Flagship", said Vincenzo Palermo from CNR and Vice-Director of the Graphene Flagship.

Andrea C. Ferrari, Science and Technology Officer of the Graphene Flagship and Chair of its Management Panel added that "this third parabolic flights campaign in two years is a testimony of the pace of development of the new graphene-based devices. The aim is to get these included in satellites or in the international space station in the next few years. The further tests of graphene inks to be performed in the sounding rocket in June will further our understanding of their behaviour in microgravity conditions."