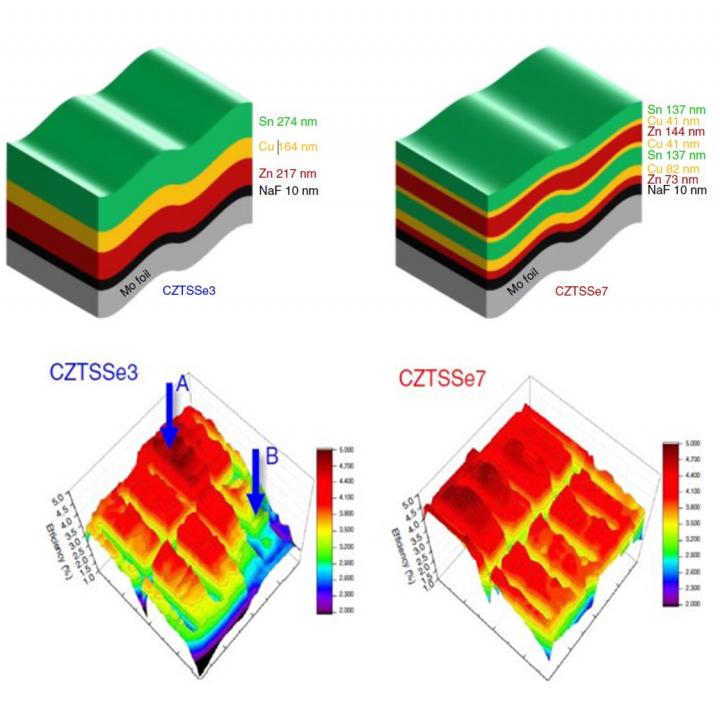 DGIST announced on Tuesday, September 10 that Dr. Jin-Kyu Kang's research team in Division of Energy Technology achieved 11.4% for the photoelectric conversion1 efficiency of flexible CZTSSe thin-film solar cell, the highest in the world. This research is expected to contribute to the development of future solar power technology and the thin-film solar cell industry of next generation.

Flexible thin-film solar cell can be applied in various fields such as wearable, building, and automobiles based on the flexible substrate technology. Since CZTSSe thin-film solar cell uses low-cost, ecofriendly materials, it is drawing limelight and is being researched as the next generation solar power technology throughout the world. However, Flexible CZTSSe`s photoelectric conversion efficiency had not exceeded 10% due to technological issue such as the spread of impurities inside the flexible substrate and delamination.

In response, the DGIST research team conducted research and achieved the highest efficiency of 11.4%, which was officially recognized. This achievement is drawing more attention because its mass production is much easier with the use of low-cost, ecofriendly materials such as copper(Cu), zinc(Zn), tin(Sn) than the existing thin-film solar cell (CIGS, CdTe, perovskite2), which uses high-cost heavy metal materials such as indium, lead, and cadmium.

One of the biggest achievements of this research is increased efficiency by changing the existing 3-stack structure of CZTSSe thin-film solar cell precursor into a multi-layered structure and by improving the voltage characteristics and uniformity. Moreover, it has the problem with uniformity degradation when a large-area process is applied to thin-film solar cell, but applied process technology in this research improved not only efficiency but also uniformity.

Dr. Kee-Jeong Yang who led the development of process technology said "Our research achievement has presented ways to secure the uniformity of large-area process, which can cause issues in commercialization. We will be able to advance the commercialization of next generation solar cell which is applicable in various fields such as building outer walls." Moreover, Senior Researcher Jin-Kyu Kang, the research project manager, said "As there is growing interest towards environment and resources are used unlimitedly these days, it is a very meaningful achievement that we have developed a thin-film solar cell using widely available, ecofriendly materials. We plan to lead the future solar cell technology using widely available materials and contribute to the development of thin-film solar cell industry.