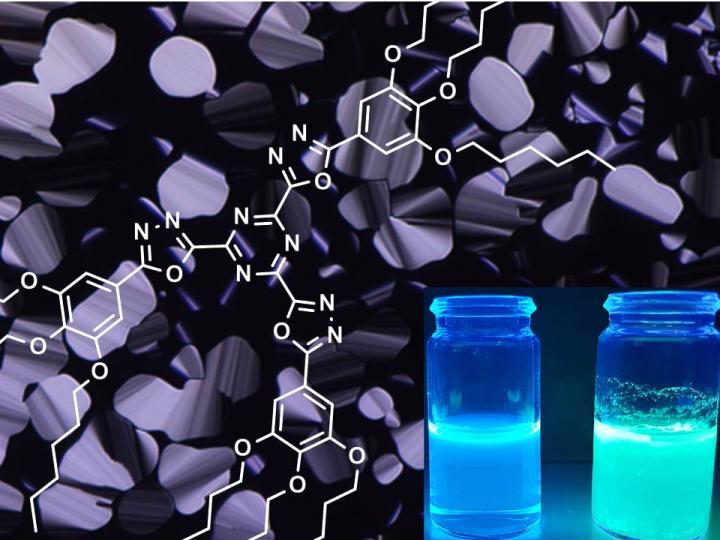 Researchers at the Institute of Organic Chemistry at Johannes Gutenberg University Mainz (JGU) have synthesized novel liquid crystals in a project sponsored by the German Research Foundation (DFG). "If you slowly cool our liquid crystalline materials, the molecules align in a self-assembly process to form columns," explained Professor Heiner Detert of JGU. "We can imagine these columns like piles of beer mats stacked one on top of the other. But the special thing is that these columns conduct electrical energy along their whole length." The materials can thus serve as organic, liquid crystalline "power cables" and provide targeted electricity transmission in electronic components. While most materials conduct positive charges carried by holes, the new molecules actually conduct electrons. An additional advantage of a liquid crystalline power cable is that if it ruptures, any such rupture will heal entirely by itself.

The researchers have identified a particularly interesting effect exhibited by their synthesized molecules: If a single molecule is stimulated by exposure to UV light, it will glow in response. If the concentration of the molecule increases, this effect disappears only to reappear again when the concentration continues to increase. If the molecules are suspended in a solvent or arranged on a film, they will fluoresce in various colors when irradiated with UV light.

Detert and his team together with Professor Matthias Lehmann of the Julius-Maximilians-Universität Würzburg recently published their results in Chemistry - A European Journal. Experts classified the research results as exceptionally significant and the journal editors selected the article as a Hot Paper. The lead author, Natalie Tober, is supported by a scholarship awarded by the Carl Zeiss Foundation.