Historically, remote wireless sensors have depended on batteries to provide power to measure data and transmit it wirelessly. This has worked reliably, but the usable life of these sensor networks is solely dependent that of the battery. In some applications, the wireless sensor nodes are accessible so the batteries can be changed relatively easily albeit at some cost, nevertheless these batteries are designed to last 5 to 10 years and are an expensive component in each sensor node. In other applications, changing the batteries is difficult, labor intensive and expensive. For example, consider changing the batteries of a wireless sensor in a nuclear power plant, a refinery or even underground. The costs associated can be substantial. Of course, bigger batteries may provide longer life, but the physical size and cost of larger batteries is not without cost. So the question becomes, “How does one make these batteries last longer?” One potential answer lies in finding another harvestable energy source to operate the sensor node when it’s available, running the node from the primary battery when it’s not.

These applications have re-introduced the concept of energy harvesting from a very different perspective, creating an emerging market for compact, predominantly wireless applications at the very low end of the power spectrum. These applications require output power that ranges from a few nanowatts to tens of milliwatts. Although, non-traditional power sources such as solar cells (photovoltaic cells) and piezoelectric transducers are known sources of electrical power, harnessing power from these non-traditional sources has been challenging. Each of these sources requires some type of power conversion circuit that can efficiently collect, manage and convert this alternative power source into a more usable form of electrical energy to power sensors, microcontrollers and wireless transceivers. Whether the source voltage is higher than needed and must be down-converted to be useful or even rectified and then down-converted in some cases, specific energy harvesting circuits are necessary. Historically, these circuits have needed very complex discrete circuits with upwards of 30 components and yet still struggle to provide high enough efficiency to be of practical use. It is only recently that specialized energy harvesting power ICs have been introduced, offering compact, simple and very efficient power conversion and management solutions in conjunction with the appropriate transducers.

These ultralow power applications include a wide array of wireless systems, including transportation, infrastructure, industrial sensing, building automation and asset tracking. These systems generally spend the majority of their operational lives in standby mode (asleep) requiring only a handful of µW. Then they wake-up, a sensor measures parameter(s) such as pressure, temperature or mechanical deflection and this data is then transmitted wirelessly to a remote system manager. The entire measurement, processing and transmission time is usually only a few milliseconds, but requires tens of mW of power during this brief period. Since the duty cycles of these applications are generally low, the average power that must be harvested can also be relatively low. Although the power source could simply be a battery it will eventually need to be replaced. But if an energy harvesting design can use ambient energy most of the time and a battery is used when that energy source is unavailable, the battery life can be dramatically extended.  A wireless network utilizing an energy harvesting technique can link any number of sensors together, for example, in a building to reduce heating, ventilation & air conditioning (HVAC) and lighting costs by turning off power to non-essential areas when the building has no occupants.

Consider if you will an energy harvesting-based HVAC monitoring system such as forced air conduits in an industrial complex, which need to constantly monitor the airflow rate, temperature and pressure of the system. Each wireless sensor node (WSN) can have temperature, pressure and flow sensors built into them. Measurements must be taken and reported every five seconds. As a HVAC system is quite long and is usually buried deep in the infrastructure of the building, running power and information lines is very expensive and subject to constant maintenance, potentially requiring expensive repairs. Replacing batteries periodically incurs significant expense due to the labor-intensive exercise of getting to each of them.

One of the most popular and readily available ambient energy sources is vibration. A small piezoelectric transducer can easily converter vibration energy found on the HVAC compressor to low current AC electrical signal (see Figure 1).  This harvesting power source would need to be rectified and stepped-down to provide a usable low voltage to power a WSN. A battery could be used as a backup power source if the energy source is temporarily unavailable. However since the battery power is used only part time—the overall battery life is extended dramatically. Therefore, an energy harvesting IC that offers very high efficiency, ultralow quiescent current, and a seamless transition from the energy-harvesting source to the battery would be an ideal solution. 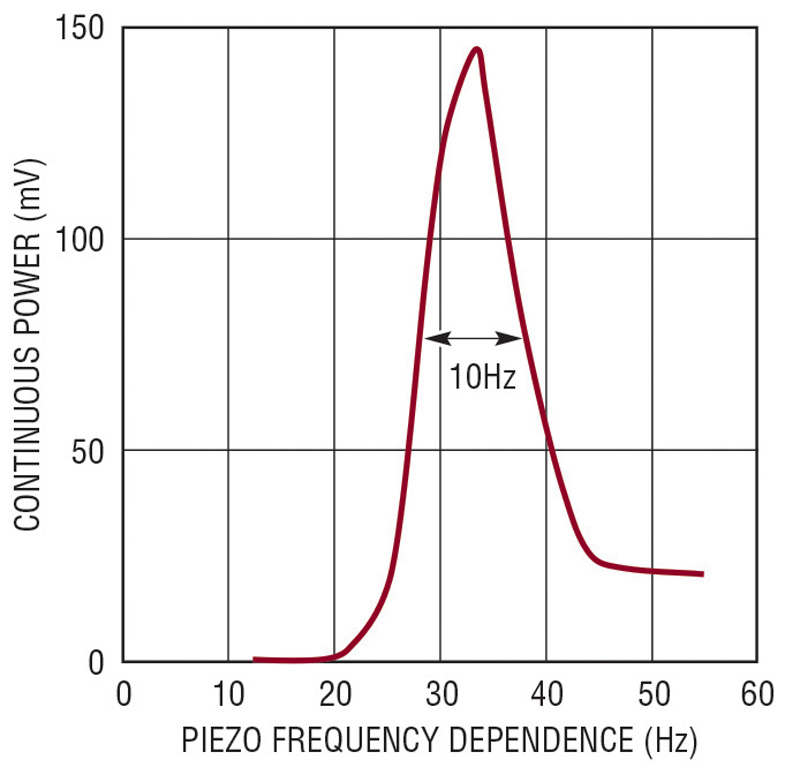 The recently introduced LTC3330 is a complete regulating energy harvesting solution that delivers up to 50mA of continuous output current to extend battery life when harvestable energy is available. It requires no supply current from the battery when providing regulated power to the load from a harvested energy source and only 750nA operating when powered from the battery under no-load conditions. The LTC330 integrates a high voltage energy harvesting power supply, plus a synchronous buck-boost DC/DC converter that is powered by a primary cell battery to create a single non-interruptible output for energy harvesting applications such as those commonly found in WSNs. The energy harvesting power supply, consisting of a full-wave bridge rectifier accommodating AC or DC inputs and a high efficiency buck converter, harvests energy from piezoelectric (AC), solar (DC) or magnetic (AC) sources. The primary cell input powers a buck-boost converter that operates from 1.8V to 5.5V at its input when harvested energy is not available to regulate the output whether the input is above, below or equal to the output. The LTC3330 automatically transitions to the battery when the harvesting source is not available (see Figure 2).

Figure 2: The LTC3330 is a complete regulating energy harvesting solution

The LTC3330’s energy harvesting inputs operate from a voltage range of 3V to 19V, AC or DC, making it ideal for a wide array of piezoelectric, solar or magnetic energy sources. Its input undervoltage lockout threshold settings are programmable between 3V and 18V, enabling the application to operate the energy harvesting source at its peak power transfer point.  Other features include programmable DC/DC and LDO output voltages, buck-boost peak current limits, an integrated supercapacitor charger/balancer and an input protective shunt (up to 25mA at VIN  >20V).

The circuit in Figure 3 shows the LTC3330 using an AC input from a piezoelectric transducer. Generally, applications will use either a DC input on AC1, and possibly a second on AC2, or a single AC input connected across AC1 and AC2. If the energy-harvesting source is AC, such as from a piezo transducer, the LTC3330 has an integrated full bridge rectifier to deliver a DC voltage to the input capacitor whereas DC sources are stored directly on the input capacitor. Once the voltage on the input capacitor exceeds the ULVO, the LTC3330’s input prioritizer turns the battery off and regulates the output from the harvested source. VOUT is pin programmable from 1.8V to 5V, which typically powers the RF transceiver. Additionally, an LDO output between 1.2V to 3.3V offers a low noise output, typically used to provide core power to microprocessors. Combined, these two outputs can deliver up to 125mA of output current when using an energy harvesting source and 50mA when the battery is engaged. When there is excess output power in energy harvesting mode, it can be stored in the supercap(s) for future use, further conserving battery life. An integrated supercap balancer can be used to further optimize energy storage.   It is important to note that when the energy-harvesting source is utilized, the battery has a zero quiescent current, so all of battery energy is saved for future use.

Figure 4 shows a more detailed view of the LTC3330”s integrated functionality. The integrated full-bridge rectifier accommodates AC inputs such as piezoelectric or magnetic transducers to rectify their AC signals into DC signal. Obviously DC inputs such as solar cells do not require this rectification. If multiple transducer inputs are used, the LTC3330 uses the one with the highest available voltage (power). The input current is collected on the input capacitor and when it exceeds the programmable ULVO, the prioritizer turns the battery off and the synchronous step down converter delivers the required power to the output, where it is used for the load via the VOUT pin or the low noise LDO output; any excess power is stored on the output capacitor and/or the supercaps. In this state there is zero quiescent current drawn from the battery. An input protective shunt offers an additional layer of safety for voltages in excess of 20V. If the energy harvesting input source is available, the prioritizer automatically switches over to the synchronous buck-boost converter to deliver the required output.

Both VOUT and VLDO stay in regulation throughout this transition, providing the required power to the sensor, wireless transmitter and microprocessor. The 1.8V to 5.5V input capability of the buck-boost converter accommodates a wide range of Li-Ion batteries. It delivers a constant voltage regardless of whether the battery voltage is above, equal to or lower than VOUT with efficiencies in excess of 90%. The buck-boost architecture offers over 30% more battery run time when compared to a conventional buck design. When operating from the battery, the total output current is dependent on the VIN/VOUT ratio and at the end of a Li-Ion batteries’ life, which will be approximately 50mA. VOUT is the input to the low noise LDO output, which is pin programmable from 1.2V up to 50mV below VOUT, making it ideal for powering a wide variety of microprocessor/controller cores. An optional supercap balancer ensures the longest life of this storage energy. Both VOUT and VLDO have power good status outputs to ease overall system operation.

So How Long Is Battery Life Extended?

Exactly how long battery life can be extended depends on the nature/availability of the ambient energy source and the overall power requirement of the WSN. In the aforementioned HVAC example, if the compressor is on all of the time, the entire system is run by the piezo EH source and the battery becomes a mere backup supply for when there is a power outage or the compressor is being serviced, thereby extending the battery life indefinitely.

As to how long battery life will be extended, the answer is, “It depends.” Nevertheless, it lies somewhere between 2x and forever and is highly dependent on the design of the systems and input/output power duty cycles. Clearly, it is only possible if an EH IC is used to accommodate both an EH source complimented by a primary battery. Thus, this enables designers to use a smaller, less expensive battery in most cases.