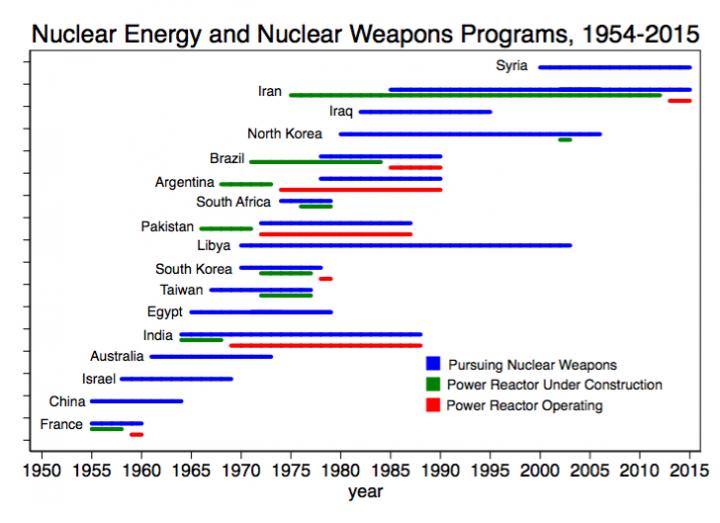 Contrary to popular thought, nuclear proliferation is not more likely to occur among countries with nuclear energy programs, according to research published in International Security.

As the study points out, nuclear energy programs do provide an increased technical ability to develop nuclear weapons. However, countries with nuclear energy programs face political obstacles that help counter this proliferation risk, including improved intelligence by outside actors, and the prospect of costly nonproliferation sanctions, which jeopardize the international trade and supplies required for most energy programs to operate. When a country announces plans to develop nuclear energy, this provides an open signal for foreign intelligence agencies to pay closer attention. As nuclear energy programs become operational, the procurement of technology and materials from foreign firms provide these same agencies with opportunities for surveillance, increasing the likelihood that suspicious activities are detected in a timely fashion. Furthermore, given that the nuclear power plant industry relies on a small number of global suppliers, nearly all of whom require International Atomic Energy Agency safeguards and the peaceful use of exported materials, countries with energy programs are generally wary of risking disruptions in supply by seeking to develop nuclear weapons.

"The findings suggest that international efforts to manage the proliferation risks of nuclear energy programs have been quite effective," says author Nicholas L. Miller, assistant professor of government at Dartmouth. "Even when countries become more technically capable of developing nuclear weapons due to an energy program, they can often be restrained by timely intelligence and the prospect of sanctions."

In the past, the U.S. has helped advance and enforce nonproliferation by leveraging its role as a major supplier of nuclear power plants and enriched uranium fuel. This leverage has diminished in recent years, as the U.S. is now only a marginal supplier in a nuclear export market dominated by Russia, with China also aiming to increase its share. To restore this important leverage, Miller proposes that the U.S. work to revive its role as a major nuclear supplier.

For nuclear cooperation agreements, Miller calls on the U.S. to forego a demand for the "gold standard" in which recipient countries must pledge not to pursue enrichment or reprocessing. This stringent requirement may scare off potential buyers, who then take their business elsewhere, which in turn reduces the United States' potential for leverage. While the U.S. should continue to oppose the spread of enrichment or reprocessing technology, it can pursue this objective via more effective strategies, such as consultations with other nuclear suppliers and quiet but forceful diplomacy with countries attempting to acquire this sensitive technology.