A study of over 37,000 users shows that the 'typing gap', the difference typing speeds between mobile devices and physical keyboards, is decreasing 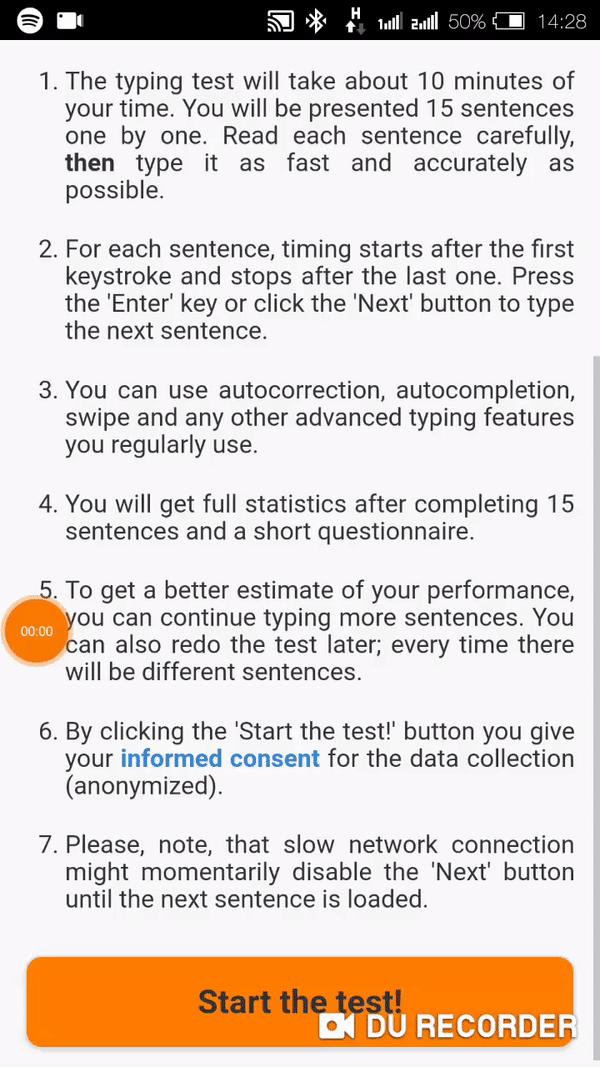 A screen capture of the typing test on mobile.

The largest experiment to date on mobile typing sheds new light on average performance of touchscreen typing and factors impacting the text input speed. Researchers from Aalto University, University of Cambridge and ETH Zürich analysed the typing speed of tens of thousands of users on both phones and computers. Their main finding is that typing speeds on smartphones are now catching up with physical keyboards.

"We were amazed to see that users typing with two thumbs achieved 38 words per minute on average, which is only about 25% slower than the typing speeds we observed in a similar large-scale study of physical keyboards." Said Anna Feit, a researcher at ETH Zürich, and one of the co-authors, "While one can type much faster on a physical keyboard, up to 100 wpm, the proportion of people who actually reach that is decreasing. Most people achieve between 35-65 WPM" The authors call the difference between typing on a keyboard and a smartphone "the typing gap" and predict that as people get less skilled with physical keyboards, and smart methods for keyboards improve further (such as auto-correction and touch models), the gap may be closed at some point. The fastest speed the researchers saw on a touchscreen was a user who managed the remarkable speed of 85 words per minute.

The research team collected a dataset from over 37,000 volunteers in an online typing test, with the help of the typing speed test service TypingMaster.com. With the consent of the participants, they recorded the keystrokes they made while transcribing a set of given sentences to assess their typing speed, errors and other factors related to their typing behaviour on mobile devices.

The dataset is unique in its size and made publicly available. While the majority of volunteers were women in their early twenties and about half of the participants came from U.S., the dataset includes people from all ages and from over 160 countries. On average, the participants reported spending about 6 hours per day on their mobile device. Anna Feit explains: "Such large amount of experience transfers to the development of typing skill and explains why young people, who spend more time with social media, communicating with each other, are picking up higher speeds."

One finger, or two thumbs?

The best predictor of performance is whether you use one finger or two thumbs to type. Over 74% of people type with two thumbs, and the speed increase it offers is very large. The study also found that enabling the auto-correct of words offers a clear benefit, whereas word prediction, or manually choosing word suggestions, does not. As Sunjun Kim, a researcher at Aalto University, explains, "The given understanding is that techniques like word completion help people, but what we found out is that the time spent thinking about the word suggestions often outweighs the time it would take you to type the letters, making you slower overall." Most users used some type of intelligent support. Only 14% of people typed without auto-correction, word suggestions or gesture typing.

The study also exposed a strong generation effect. Young people, between 10 and 19 years of age are about 10 wpm faster than people in their 40s. Antti Oulasvirta, professor at Aalto University: "We are seeing a young generation that has always used touchscreen devices, and the difference to older generations that may have used devices longer, but different types, is staggering." The authors found no benefit from formal training on the ten-finger typing system on physical keyboards. Oulasvirta continues: "This is a type of motor skill that people learn on their own with no formal training, which is very unlike typing on physical keyboards. It is an intriguing question what could be achieved with a careful training program for touchscreens."

If you want to type faster on mobile, the researchers recommend using two thumbs and enabling auto-correction of words.