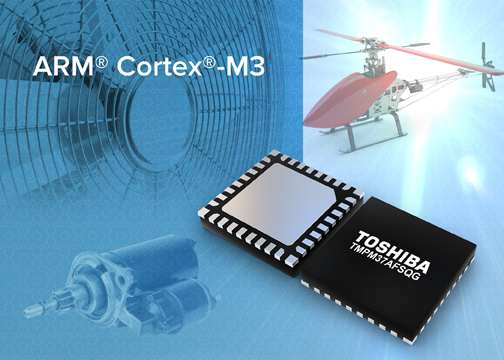 Toshiba Electronics Europe has expanded its TX03 series of ARM Cortex-M3-based microcontrollers with the launch of the TMPM37AFSQG. The new IC is presented as the world’s smallest vector control microcontroller that incorporates Toshiba’s Vector Engine Plus (VE+) coprocessor and a pre-driver to enable brushless DC motor control.

The TMPM37AFSQG pre-driver can directly drive MOSFETs for complementary three-phase PWM output with a minimum unit of 25ns. This makes the microcontroller ideal for controlling small motors, server fans, small cooling fans, vent fans, electric fans, ceiling fans, pumps and toys. The microcontroller core is powered from the pre-driver voltage enabling the use of a single-power supply to drive the entire device.

Also integrated into the device are an op-amp essential for current detection using a single shunt resistor and a comparator for over-current detection. All functions have been incorporated in a small package (VQFN32 5 x 5 mm, 0.5 mm pitch), designed to minimize mount space.

Sample shipments will start in the middle of January 2016