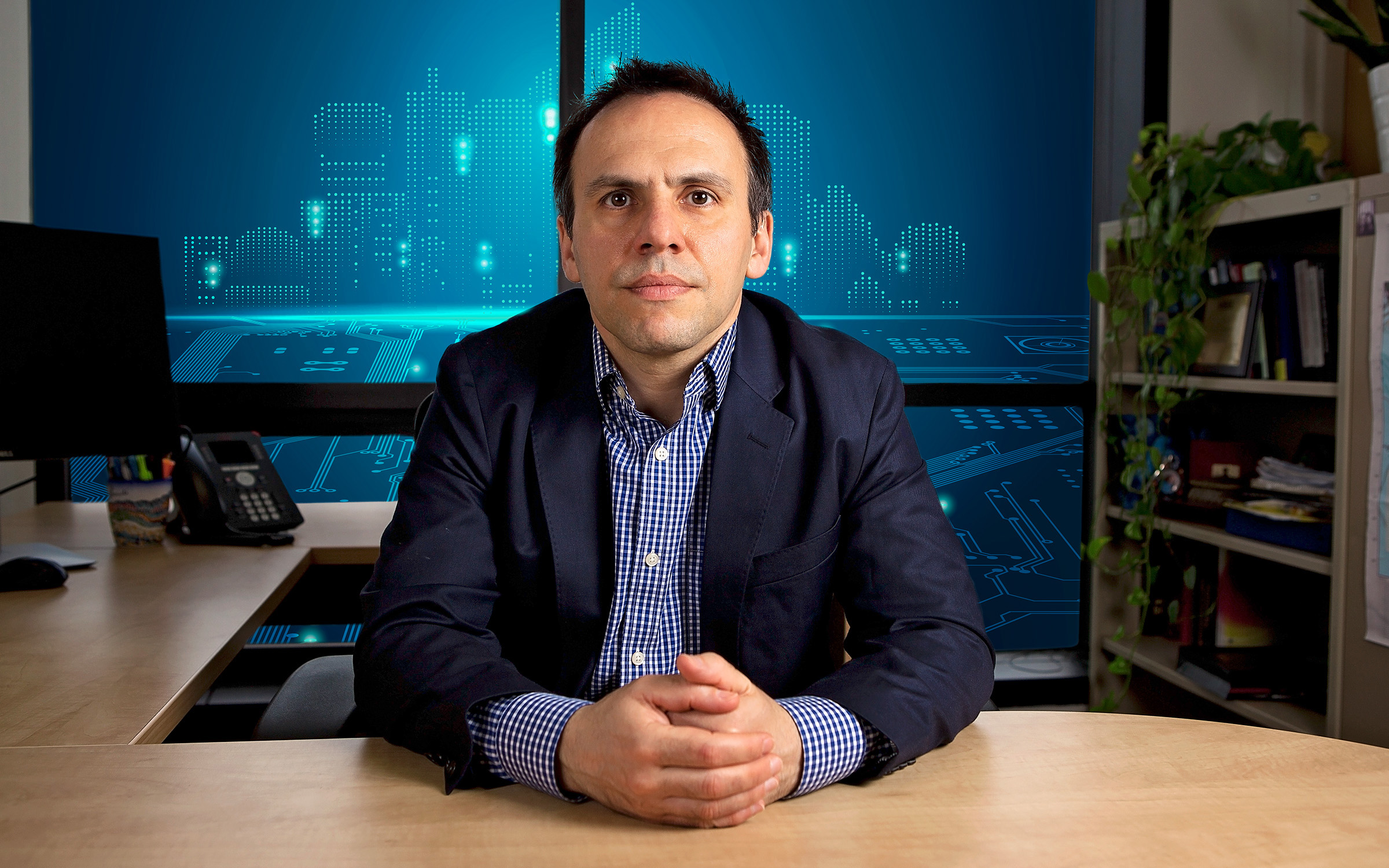 The U.S. power grid, after faithfully delivering electricity to our neighborhoods for generations, is facing significant change to how it operates — thanks to solar-panel installations, wind farms, new energy storage systems, and even electric cars.

As utilities meet the challenges of incorporating distributed energy sources on the low- and medium-voltage grids, however, they are hindered by incomplete knowledge.

“Limited instrumentation and their sheer size has kept a full picture of distribution grids out of focus,” said Vassilis Kekatos, an assistant professor in the Bradley Department of Electrical and Computer Engineering.

Kekatos and his team hit upon a novel technique called grid probing to generate the information needed about what is often called the world’s largest machine. Their pioneering process engages smart inverters — devices that convert the direct current output of renewable sources into the alternating current used by consumers — outside their intended function.

For this effort, Kekatos, who specializes in power systems and smart grids, was awarded the National Science Foundation Faculty Early Career Development Award.

The state of the grid

Today’s residential electricity networks are sprawling configurations and reconfigurations of decades-old infrastructure strung through a patchwork of smart updates. A utility company may own 3,000 feeders, each of which transfers power from substations to thousands of nodes. Half of those nodes may be outfitted with smart meters, but those are only sampled hourly.

To accomplish any meaningful grid-wide optimization, we need to know the power consumed or generated at every node, the line and transformer parameters, and the grid layout — all in real time, said Kekatos.

“Utility companies do not have information this detailed,” he said. “But we must acquire it to bring about the smart grids of the future.”

Kekatos plans to close the information gap with an original and potentially transformative solution he calls grid probing.

“Grid probing casts smart inverters in a second role,” explained Kekatos. “This is in addition to their standard conversion and control functionality.”

Smart inverters are found in solar panels, energy storage devices, and electric vehicles and come with unprecedented capabilities in sensing, actuation, and communication. Kekatos wants to use them for learning tasks as well. He plans to direct smart inverters to inject a short burst of power through the grid, eliciting additional grid readings at the inverter meter. By comparing “probed” voltage responses with baseline voltages, he expects to discover non-metered loads and unknown network parameters.

The power injections will be minimally invasive, causing no harm, but could yield significant information for understanding the nonlinear behavior of power grids.

Kekatos and his team will combine data from the grid probing with data from existing smart metering and grid sensing. Coupling power system modeling with data analytics, they plan to map the connectivity and line parameters of the distribution networks.

Kekatos has designed a new graduate-level course on power distribution systems with emphasis on multi-phase analysis, optimization, and learning.

The team is also reaching out to pre-college female students through the annual C-Tech2program, a two-week residential camp run by the Center for the Enhancement of Engineering Diversity at Virginia Tech. The educational component of this project will feature hands-on learning activities and collaborative app-based games about electric power grids.