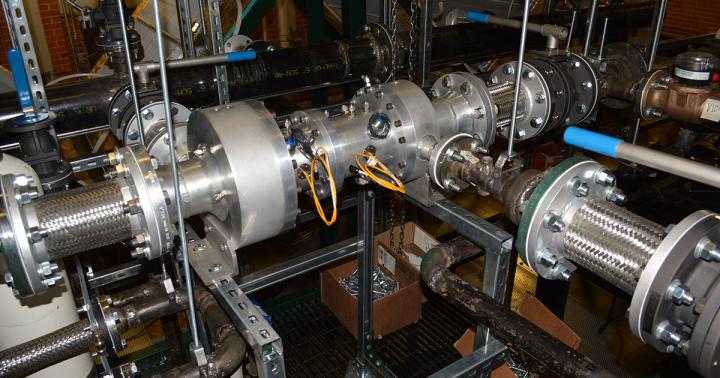 The turbocompressor is one of the key components to Todd Bandhauer's waste heat recovery system.

Feel the heat radiating off a running car or touch the top of a warm refrigerator. Both are examples of mechanical processes that generate "waste heat."

On a small scale, like running household appliances, waste heat might not seem like a big deal. But on a large scale, like running a backup generator for a hospital or university, waste heat can equate to a huge loss of energy, efficiency and savings. According to the U.S. Department of Energy (DOE), an estimated 20 to 50 percent of industrial energy input is lost as waste heat.

Todd Bandhauer, director of the Interdisciplinary Thermal Science Lab at the Colorado State University Energy Institute and assistant professor in mechanical engineering, has dedicated his career to putting waste heat back to work.

"We are honored to receive this generous award, which will allow us to move from idea to commercialization rapidly and will help us bring real cost and energy savings to U.S. manufacturers," Bandhauer said.

Bandhauer's system takes waste heat generated in mechanical processes and transforms it into cold water that can be used in down-the-line industrial processes. This system represents a major advance in the field because it is able to take waste heat in the lower temperature range (194 degrees Fahrenheit - 302 degrees Fahrenheit) and recover it - something that traditionally researchers have struggled to do.

"His project is thermal alchemy - turning hot into cold. Heating and cooling account for about 48 percent of the energy use in a typical U.S. home, according to the DOE," added Executive Director of the Energy Institute Bryan Willson. "This award doubles down on his approach to converting waste heat into advanced cooling."

The turbo-compression cooling system takes the unharnessed waste heat given off in many day-to-day industrial processes, like running a large generator, and quickly transforms it into cooled water in a cost-effective manner.

Bandhauer's project has numerous large-scale practical applications. For instance, dairy producers generate waste heat when they pasteurize their milk. With Bandhauer's system, a dairy producer could transform the heat they are already generating and put it to work chilling milk.

Bandhauer's project was one of 24 selected to receive between $250,000 and $2.5 million in funding by the DOE Office of Energy Efficiency and Renewable Energy, Advanced Manufacturing Office. His project was the only one in Colorado to receive funding.