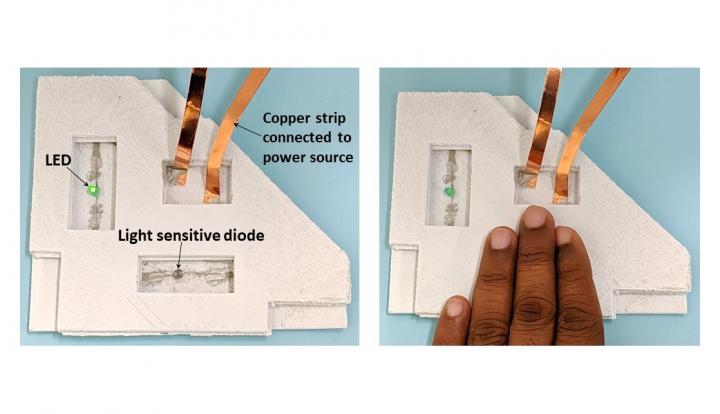 This is an example of simple light-sensing electronics with an LED (light-emitting diode), a light-sensitive diode (semiconductor) and power connected by a high-performance circuit inside polymer. The LED is on when exposed to light and off when light from the diode is blocked.

They used pulses of high-energy light to fuse tiny silver wires, resulting in circuits that conduct 10 times more electricity than the state of the art, according to a study in the journal Additive Manufacturing. By increasing conductivity 10-fold, the engineers can reduce energy use, extend the life of devices and increase their performance.

"Our innovation shows considerable promise for developing an integrated unit - using 3D printing and intense pulses of light to fuse silver nanoparticles - for electronics," said senior author Rajiv Malhotra, an assistant professor in the Department of Mechanical and Aerospace Engineering in the School of Engineering at Rutgers University-New Brunswick.

Embedding electrical interconnections inside 3D-printed structures made of polymers, or plastics, can create new paradigms for devices that are smaller and more energy-efficient. Such devices could include CubeSats (small satellites), drones, transmitters, light and motion sensors and Global Positioning Systems. Such interconnections are also often used in antennas, pressure sensors, electrical coils and electrical grids for electromagnetic shielding.

The engineers used high-tech "intense pulsed light sintering" - featuring high-energy light from a xenon lamp - to fuse long thin rods of silver called nanowires. Nanomaterials are measured in nanometers (a nanometer is a millionth of a millimeter - about 100,000 times thinner than a human hair). Fused silver nanomaterials are already used to conduct electricity in devices such as solar cells, displays and radio-frequency identification (RFID) tags.