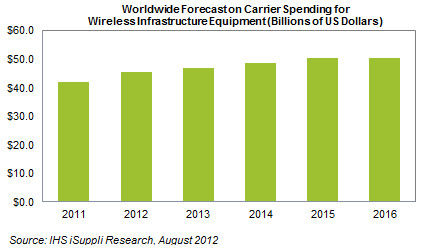 The spending on infrastructure, considered a bellwether for gauging overall prospects of the wireless industry moving forward, continues the strong 7.7% expansion of last year, when carrier expenditures amounted to $42.0 billion. Growth will moderate somewhat during the next few years to the 3.0% range, with total carrier spending on infrastructure equipment reaching $50.6 billion by 2016, as shown in the figure attached. Global spending by wireless carriers on infrastructure equipment is expected to rise a solid 8.3% this year and reach $45.5 billion, driven primarily by investments among carriers in developed nations on the 4G LTE technology, according to an IHS iSuppli Wireless Communications Special Report "Growth this year is due to investments of many carriers in the United States, Japan and South Korea on 4G LTE technology deployments, supplemented by carriers in China, Europe, India and other regions of the world investing in 3.5G network upgrades," said Jagdish Rebello, Ph.D., director for consumer & communications at IHS. "Carriers are making the investments on infrastructure in order to keep pace with growing data traffic, especially on the mobile side."   Data leads the market The capability to accommodate data traffic is crucial, especially since business models are continually being developed by carriers to make the most out of the data traffic flowing on their networks and to monetize such opportunities. With voice revenues having flattened some time ago, data revenue is the best bet for carriers to keep growing in both the developed world and the emerging economies. Already, data revenues now make up between 25% to 35% of carriers' total service revenues, with the proportion expected to reach 50% by 2016 for many carriers in Europe, Australia, South Korea, Japan, and North America. Carriers are meeting resistance from customers and regulatory authorities in some of their business models to monetize data traffic. For instance, plans by carriers to prioritize data networks—while assigning low priority in video traffic from third-party content providers—face strong opposition from European telecom authorities. Nonetheless, it is critical to the mobile value chain that carriers successfully develop and execute on their data business models. Failure to do so will result in carriers delaying the deployment of next-generation networking technologies, aggravating the congestion of mobile networks and contributing to a lower-quality mobile broadband experience for the consumer, IHS believes.   Generation gap The bulk of carrier spending this year will continue to be on older 3.5G technologies, equivalent to some $34.4 billion and flat from $34.3 billion in 2011. Spending on 4G, however, is up a remarkable 132% this year to $8.6 billion, with 4G expenditure projected to take majority share starting in 2013. Carrier spending on 4G next year will hit $25.2 billion, while expenditure on 3.5G will drop to $20.9 billion.   Smart investments in intelligent networks Carriers are also continuing to develop intelligent networking architectures to keep up with bandwidth growth while preventing infrastructure spending from ballooning to extremes. For instance, several carriers in the developed nations are commercially deploying networks of Wi-Fi hotspots, or teaming up with Wi-Fi service providers, to provide coverage in metropolitan downtowns. Such Wi-Fi offloading will be a way for carriers to align available networking capacity with ever-growing demand among consumers for wireless access on their devices, including mobile phones and media tablets. As carriers migrate to 4G LTE, they will also look to deploy heterogeneous networking architectures involving a combination of macro and micro base stations, coupled with so-called metro cells and enterprise femto cells. Such cells, mountable on street or traffic lights, can be used to fill holes in wireless coverage and add networking capacity in areas of high data traffic.   New subs keep surfacing Global cellular subscriptions, meanwhile, are projected to grow at a clip—climbing from 6.0 billion at the end of last year to more than 7.8 billion at the close of 2016. In the developed nations subscription growth will come through the addition of new devices by existing subscribers, while expansion in the developing world will be through new subscribers coming online as well as the addition of new subscriptions by current users. The spending on wireless infrastructure equipment is but one segment of total carrier wireless spending, which also includes expenditures for cables, plants and site procurements; as well as capital spending on maintenance and software upgrades. Total wireless spending this year by carriers on the three areas combined will amount to $153.5 billion, up 6.5% from $144.1 billion in 2011. IHS iSuppli Report deeplink