Powerbox has announced the release of its new high efficiency 750VDC input DC/DC converter for light-rail and industrial applications. 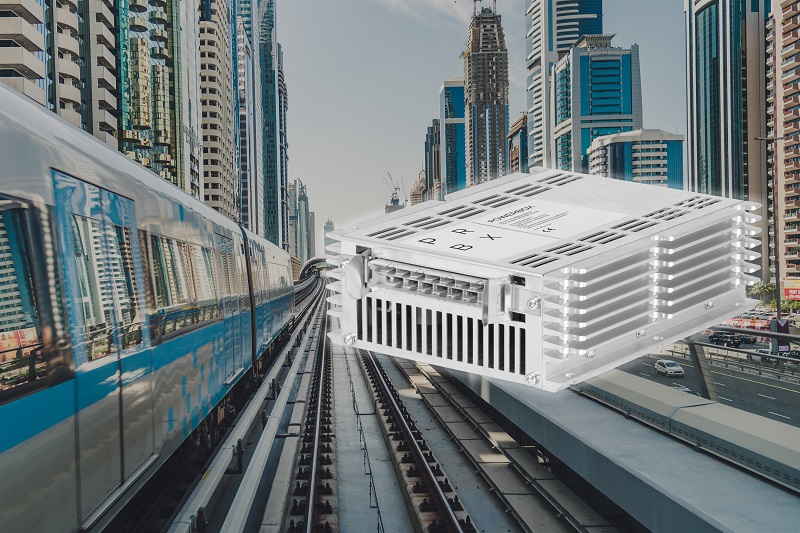 The switching stage of the new PRBX ENR500D is based on an enhanced resonant topology providing a high efficiency of 95% typical across the low to high load range. Designed for railway applications, the ENR500D fulfills the stringent standard EN 50124-1 and delivers full performance across the temperature range of -40 to +70 degrees C. The ENR500D shortens time-to-market when a custom solution is required.

Dependent upon their location and the technology available at the time of installation, a wide variety of electrically powered traction systems are used in rapid transit systems around the world. Most metros operate from dc power either at 750VDC with a third rail, or 1.5kV with a third rail or from an overhead catenary. 750VDC is very common in light rail, powering both the rolling-stock equipment as well trackside signaling systems. The same voltage is also used in industrial equipment and in applications such as mining.

With more than 40 years of experience in designing power solutions for demanding applications in railway and industrial applications, PRBX designers have developed the 500W ENR500D platform that is built on a resonant topology combined with the latest MOSFET technology and the use of high performance magnetics. The ENR500D is designed to comply with the EN 50124-1 standard and for the so-called Pollution Degree 2 (PD2) such as control cabinets in the driver’s cabin or passenger compartments. The ENR500D has ingress protection to IP20, and input to output double reinforced isolation. The unit complies with EMC emissions and immunity as specified in both EN 50124-1 and EN 50124-5.

The ENR500D has a nominal input voltage of 750VDC and operates within a range of 500 to 900VDC. The nominal output voltage is set to 48VDC, though it can be adjusted up to 60VDC. Nominal output power is 500W constant across the temperature range of -40 to +70 degrees C in natural cooling conditions. The enhanced topology confers to the ENR500D a high efficiency of up to 95% from 20% to 100% load conditions. Designed to reduce systems energy consumption, at no load the ENR500D input power is less than 5W.

In railway applications robustness is a must and the ENR500D is enclosed in an aluminum chassis with integral heatsink. It measures 163 x 230 x 80mm and has an ingress protection level of IP20. For reliability and availability all printed circuit boards have a protective coating.

As designed for a large range of light-rail and industrial applications, the ENR500D can be modified to offer other output voltages such as 12V, 24V or any other required by the system designer. Different output powers can also be provided in optimized mechanical formats.