A Big Spark For Energy Research

US Department of Energy announces $12.8 million for UD-led center 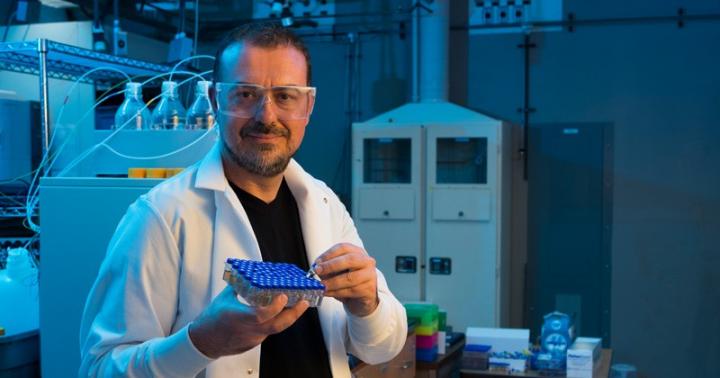 Dion Vlachos is the director of the Catalysis Center for Energy Innovation and the Allan and Myra Ferguson Professor of Chemical and Biomolecular Engineering at UD.

The University of Delaware has won a $12.8 million, four-year funding renewal from the U.S. Department of Energy for the continued operation of the Catalysis Center for Energy Innovation (CCEI). The center involves scientists from academic institutions and national laboratories across the U.S. in developing catalytic technologies -- the spurs that move chemical reactions along -- for converting biomass, such as trees and grasses, into chemicals and fuels.

Since its inception as one of the nation's Energy Frontier Research Centers in 2009, CCEI has discovered or greatly advanced processes that can produce soap, jet fuel, adhesives and many other useful products from substances typically regarded as waste.

"This is a terrific accomplishment which speaks volumes to the excellence of our Catalysis Center for Energy Innovation and its team of scientists from UD and our many collaborating institutions," said University of Delaware President Dennis Assanis. "We congratulate this exceptional team and its leader, Professor Dion Vlachos, for their commitment to sustainability and their ingenuity in transforming non-edible biomass into useful materials for society. We look forward to more exciting developments in the years ahead."

"The Catalysis Center for Energy Innovation has consistently delivered on the Department of Energy's goal to bring together researchers from multiple disciplines and institutions, coalescing them into highly productive teams that are tackling scientific problems once thought intractable while also training new generations of scientists," Charlie Riordan, UD's vice president for research, scholarship and innovation, said. "We wish the CCEI team much success in their continued development of critical energy technologies."

Dion Vlachos, CCEI director and the Allan and Myra Ferguson Professor of Chemical and Biomolecular Engineering at UD, called the renewal an extraordinary opportunity to expand the boundaries of catalysis research.

"We're delighted to be renewed again," said Vlachos, who also serves as director of the Delaware Energy Institute. "This reflects the excellence of our catalysis programs and of our partners, the strong commitment and talent of our faculty, staff, students and postdocs and UD's investment in the center. We're looking forward to continuing our contributions to energy and sustainability, and the preparation of the future generation of scientists and engineers by advancing the frontiers of catalysis research."

CCEI is one of the few original Energy Frontier Research Centers to still exist, and one of nine to receive renewal. According to DOE, the current cohort of EFRCs will lay the scientific groundwork for future advances in solar energy, nuclear energy, energy conversion and storage, electronics and computation, production of fuels and chemicals, carbon capture, and control of Earth's subsurface.