A Biofuel for Automated Heat Generation 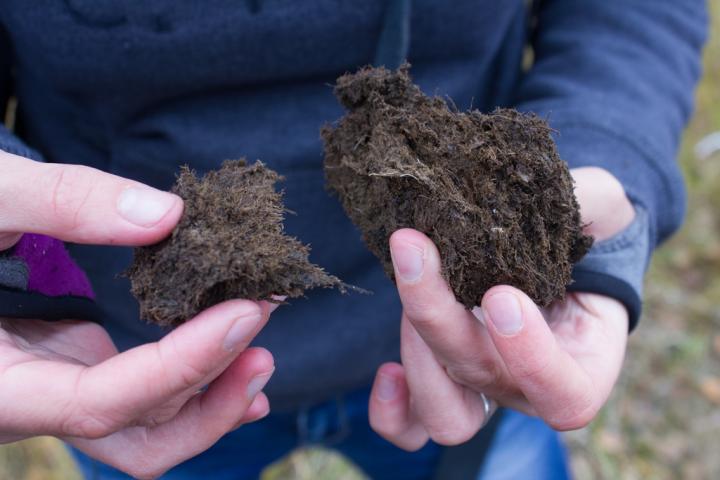 This is Arkadievsky peat at the Tomsk Oblast in Siberia Russia.

Pyrolysis - a process of biomass decomposition - can be organized automatically for heat generation out of the most common type of biomass such as peat and straw. That is, it is sufficient to heat biomass to a certain temperature and then the process proceeds in the autothermal mode due to its own heat release. This technology was studied by scientists from Tomsk Polytechnic University in the article published in the Journal of Thermal Analysis and Calorimetry.

The development of research in this domain will make energy generation out of biofuel more resource efficient and feasible.

The scientists presented the study results for such types of biomass as pine sawdust, chips from various types of wood, straw, two types of peat - from the Arkadievsky and Sukhovskoye deposits from the Tomsk Oblast. They are the most common types of biomass in the region and typical for Russia as a whole. In order to generate heat and energy valuable products - tar, solid carbonaceous residue and combustible gas - TPU scientists subjected it to pyrolysis, the process of thermal decomposition of organic matter in an oxygen-free environment.

On the planet, there is a huge amount of organic matter which can be used as biofuel, i.e. products of the plant of animal worlds as well as the vital activity of human society. Such fuel is certainly much more environmental friendly compared to traditional fuels.

A co-author of the study, a research fellow at the Butakov Research Center Roman Tabakaev says: 'However, to replace or just compete with fossil organic raw materials, fuel production out of biomass should become more feasible.'

One of the ways to produce heat from biomass is pyrolytic processing. Pyrolysis is the basis for many modern technologies - the production of biofuels out of biomass, conversion of biofuels etc. Despite the fact that pyrolysis is known for a long time scientists have not come to a common opinion as far as this energy-consuming technology. Some believe this is an unprofitable wasteful technology as it requires energy expenses to decompose organic matter. The other prove, and the study authors refer themselves to them, that pyrolysis can undergo with heat release that can be used to maintain the process itself. The study carried out by TPU researchers vividly prove this assumption.

In the respect of pyrolysis, an autothermal regime is a process in which the magnitude of the thermal effect exceeds thermal costs. That is, at the decomposition of biomass much heat should be released than it takes to heat it. To identify the values of these indicators - the heat effect and heat costs - for specific biomass types, the authors of the article conducted thermogravimetric (TGA) and differential thermal analyzes, and also experimentally processed the above mentioned biomass samples.

'The experimental and analytical data obtained indicate that during the pyrolysis of straw, chips, sawdust and peat from the Sukhovskoy deposit much heat is released than it is required for their heating. In the case of peat from the Arkadievsky deposit, the thermal effect was less than the cost of heating,' - notes Roman Tabakaev.

'In the article, we have shown by calculation the possibility of organizing such an autothermal pyrolysis. This data is confirmed by the results of recent physical experiments with straw, which showed: when the temperature of the straw reaches 365 ° C, it continues to rise without additional heating, 'independently', to 430 ° C.

Now our task is to physically realize pyrolysis in an autothermal regime with continuous supply of raw materials to the reactor, for which currently we are creating an experimental installation,' =says the scientist.