A Burst of 'Synchronous' Light 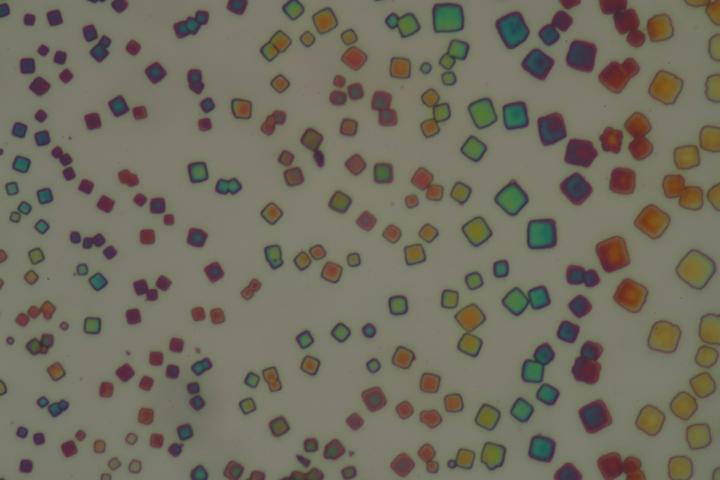 Some materials spontaneously emit light if they are excited by an external source, for instance a laser. This phenomenon is known as fluorescence. However, in several gases and quantum systems a much stronger emission of light can occur, when the emitters within an ensemble spontaneously synchronize their quantum mechanical phase with each other and act together when excited. In this way, the resulting light output can be much more intense than the sum of the individual emitters, leading to an ultrafast and bright emission of light - superfluorescence. It only occurs, however, when those emitters fulfill stringent requirements, such as having the same emission energy, high coupling strength to the light field and a long coherence time. As such, they are strongly interacting with each other but at the same time are not easily disturbed by their environment. This has not been possible up to now using technologically relevant materials. Colloidal quantum dots could just be the ticket; they are a proven, commercially appealing solution already employed in the most advanced LCD television displays - and they fulfill all the requirements.

Researchers at Empa and ETH Zurich, led by Maksym Kovalenko, together with colleagues from IBM Research Zurich, have now shown that the most recent generation of quantum dots made of lead halide perovskites offer an elegant and practically convenient path to superfluorescence on-demand. For this, the researchers arranged perovskite quantum dots into a three-dimensional superlattice, which enables the coherent collective emission of photons - thus creating superfluorescence. This provides the basis for sources of entangled multi-photon states, a missing key resource for quantum sensing, quantum imaging and photonic quantum computing.

"Birds of a feather flock together"

A coherent coupling among quantum dots requires, however, that they all have the same size, shape and composition because "birds of a feather flock together" in the quantum universe, too. "Such long-range ordered superlattices could only be obtained from a highly monodisperse solution of quantum dots, the synthesis of which had been carefully optimized over the last few years," said Maryna Bodnarchuk, a senior scientist at Empa. With such "uniform" quantum dots of various sizes, the research team could then form superlattices by properly controlling the solvent evaporation.

The final proof of superfluorescence came from optical experiments performed at temperatures of around minus 267 degrees Celsius. The researchers discovered that photons were emitted simultaneously in a bright burst: "This was our 'Eureka! ' moment. The moment we realized that this was a novel quantum light source," said Gabriele Rainó from ETH Zurich and Empa who was part of the team that carried out the optical experiments.

The researchers consider these experiments as a starting point to further exploit collective quantum phenomena with this unique class of material. "As the properties of the ensemble can be boosted compared to just the sum of its parts, one can go way beyond engineering the individual quantum dots," added Michael Becker from ETH Zurich and IBM Research. The controlled generation of superfluorescence and the corresponding quantum light could open new possibilities in LED lighting, quantum sensing, quantum-encrypted communication and future quantum computing.