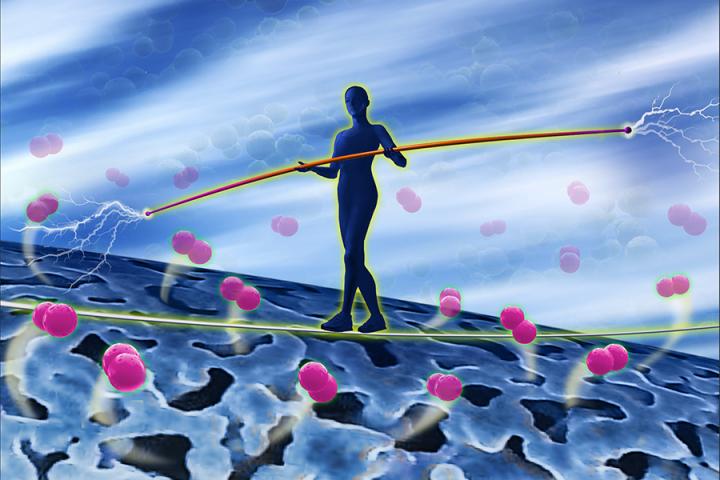 Argonne scientists and their collaborators have used a new and counterintuitive approach to balance three important factors -- activity, stability and conductivity -- in a new catalyst designed for splitting water.

In a new study, researchers from the U.S. Department of Energy's (DOE) Argonne National Laboratory, Johns Hopkins University, Drexel University and several universities in South Korea used a new and counterintuitive approach to create a better catalyst that supports one of the reactions involved in splitting water into hydrogen and oxygen. Scientists plan to use the generated hydrogen as a clean fuel.

"Finding a material that works well for energy conversion or storage is like creating a happy marriage." - Nenad Markovic, Argonne materials scientist and study author.

By first creating an alloy of two of the densest naturally occurring elements and then removing one, the scientists reshaped the remaining material's structure so that it better balanced three factors important for chemical reactions: activity, stability and conductivity.

"Finding a material that works well for energy conversion or storage is like creating a happy marriage," said Nenad Markovic, an Argonne materials scientist and author of the study. "In our case, we found that a dynamic partnership between two different materials helped us integrate competing concerns."

Scientists searching for new catalysts have scoured the periodic table to find the right elements or combinations of elements to maximize a catalyst's activity in water-splitting reactions, as well as the durability of the active sites on its surface. Finding materials that are both stable and active, however, has been a challenge.

"More active catalysts tend to be less stable," Markovic said. "Those that seem to work twice as well usually work only half as long. It is becoming obvious that designing active catalysts is not enough -- we need to have not only active, but also stable, materials."

For the new catalyst, Markovic and his colleagues turned to iridium, a metal most commonly associated with meteorites. As a thin film, iridium is catalytically active, but as it reacts over time with an electrolyte environment, iridium atoms become oxidized. During this process, some of them leave the catalyst's surface through corrosion, increasingly impairing its performance.

The research team worked to prevent the oxidation by reorganizing the iridium's structure. To help stabilize and activate iridium, they alloyed it with its neighbor on the periodic table, osmium.

Unlike iridium, osmium is neither catalytically active nor stable, but it did offer a key benefit. After alloying the osmium and iridium together, the researchers then de-alloyed the two metals, leaving behind only a reconfigured structure of three-dimensional iridium nanopores.

"Without the osmium, the iridium would never achieve this state," Markovic said. "We needed to introduce and then remove the osmium to get a form of iridium that was both active and stable."

Markovic said each nanopore's enhanced catalytic stability is due to the small volume of electrolyte within a pore becoming quickly saturated with iridium ions so that surface atoms stop dissolving, in much the same way that it is easier to saturate a teacup of water with sugar than a 10-gallon jug.

While the nanopore's structure addressed the need for a stable, active catalyst, it was another facet of the iridium's reconfiguration that helped boost the material's electron conductivity. Under operational conditions, the porous catalyst actually forms a unique shell of less-conductive iridium oxide around its highly conductive iridium metal interior. This way, electrons can move easily through most of the catalyst to reach the surface, where the water molecule waits on electrons to initiate the water-splitting reaction.

"Essentially, we're trying to find a way to send electrons through on the 'expressway,' rather than making them take the side roads," Markovic said. "This core-shell configuration [of the nanoporous material] allows us to do that."