Process can use coal, shale gas and biomass while consuming carbon dioxide 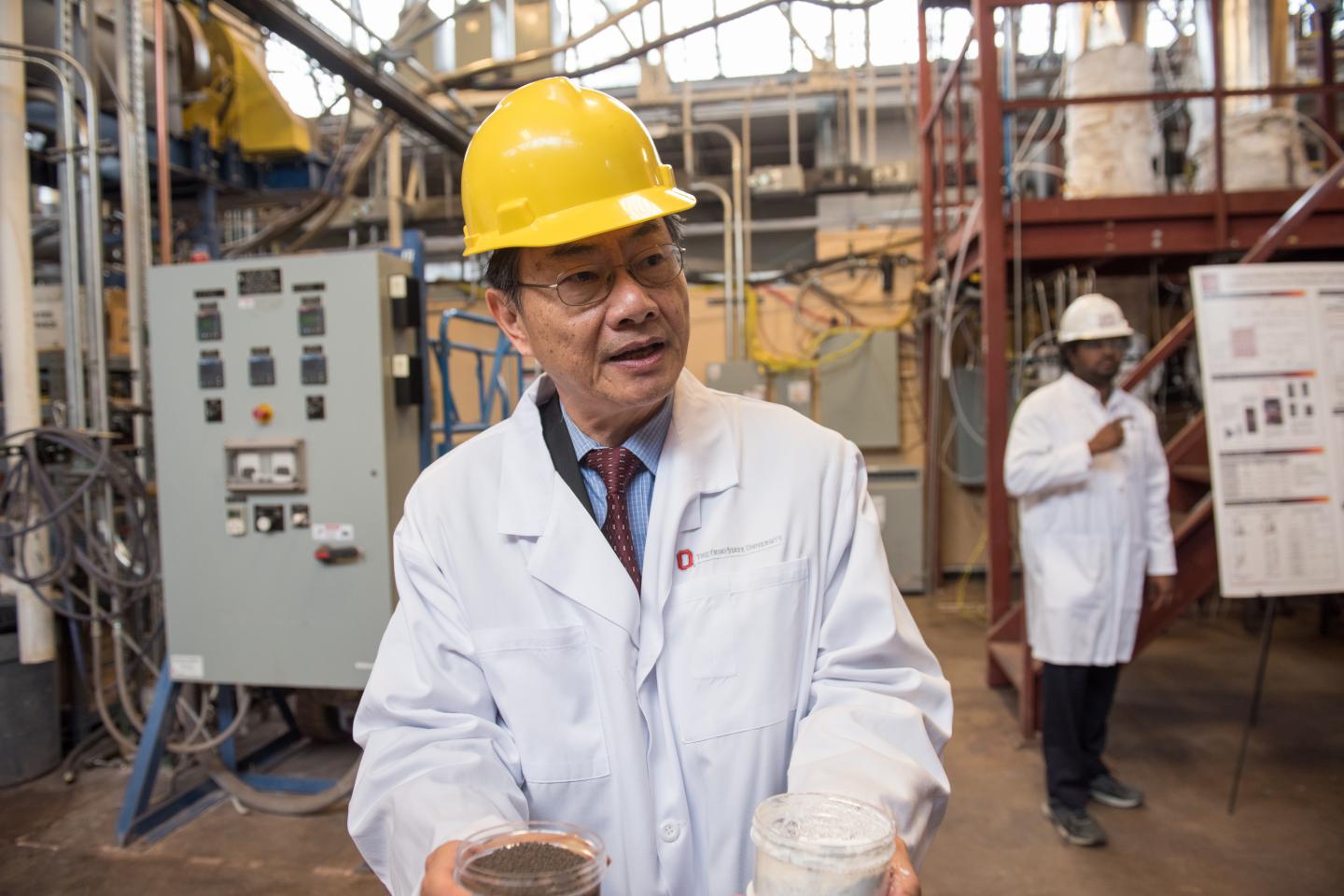 Photo by Jo McCulty, courtesy of The Ohio State University.

COLUMBUS, Ohio--Engineers at The Ohio State University are developing technologies that have the potential to economically convert fossil fuels and biomass into useful products including electricity without emitting carbon dioxide to the atmosphere.

In the first of two papers published in the journal Energy & Environmental Science, the engineers report that they've devised a process that transforms shale gas into products such as methanol and gasoline--all while consuming carbon dioxide. This process can also be applied to coal and biomass to produce useful products.

In the second paper, they report that they've found a way to greatly extend the lifetime of the particles that enable the chemical reaction to transform coal or other fuels to electricity and useful products over a length of time that is useful for commercial operation.

Finally, the same team has discovered and patented a way with the potential to lower the capital costs in producing a fuel gas called synthesis gas, or "syngas," by about 50 percent over the traditional technology.

The technology, known as chemical looping, uses metal oxide particles in high-pressure reactors to "burn" fossil fuels and biomass without the presence of oxygen in the air. The metal oxide provides the oxygen for the reaction.

Chemical looping is capable of acting as a stopgap technology that can provide clean electricity until renewable energies such as solar and wind become both widely available and affordable, the engineers said.

"Renewables are the future," said Liang-Shih Fan, Distinguished University Professor in Chemical and Biomolecular Engineering, who leads the effort. "We need a bridge that allows us to create clean energy until we get there--something affordable we can use for the next 30 years or more, while wind and solar power become the prevailing technologies."

Five years ago, Fan and his research team demonstrated a technology called coal-direct chemical looping (CDCL) combustion, in which they were able to release energy from coal while capturing more than 99 percent of the resulting carbon dioxide, preventing its emission to the environment. The key advance of CDCL came in the form of iron oxide particles which supply the oxygen for chemical combustion in a moving bed reactor. After combustion, the particles take back the oxygen from air, and the cycle begins again.

The challenge then, as now, was how to keep the particles from wearing out, said Andrew Tong, research assistant professor of chemical and biomolecular engineering at Ohio State.

"The particle itself is a vessel, and it's carrying the oxygen back and forth in this process, and it eventually falls apart. Like a truck transporting goods on a highway, eventually it's going to undergo some wear and tear. And we're saying we devised a particle that can make the trip 3,000 times in the lab and still maintain its integrity," Tong said.

This is the longest lifetime ever reported for the oxygen carrier, he added. The next step is to test the carrier in an integrated coal-fired chemical looping process.

Another advancement involves the engineers' development of chemical looping for production of syngas, which in turn provides the building blocks for a host of other useful products including ammonia, plastics or even carbon fibers.

This is where the technology really gets interesting: It provides a potential industrial use for carbon dioxide as a raw material for producing useful, everyday products.

He calls the most recent advances "significant and exciting," and they've been a long time coming. True innovations in science are uncommon, and when they do happen, they're not sudden. They're usually the result of decades of concerted effort--or, in Fan's case, the result of 40 years of research at Ohio State. Throughout some of that time, his work has been supported by the U.S. Department of Energy and the Ohio Development Services Agency.

The university would like to partner with industry to further develop the technology.

The Linde Group, a provider of hydrogen and synthesis gas supply and plants, has already begun collaborating with the team. Andreas Rupieper, the head of Linde Group R&D at Technology & Innovation said that the ability to capture carbon dioxide in hydrogen production plants and use it downstream to make products at a competitive cost "could bridge the transition towards a decarbonized hydrogen production future." He added that "Linde considers Ohio State's chemical looping platform technology for hydrogen production to be a potential alternative technology for its new-built plants".

The Babcock & Wilcox Company (B&W), which produces clean energy technologies for power markets, has been collaborating with Ohio State for the past 10 years on the development of the CDCL technology - an advanced oxy-combustion technology for electricity production from coal with nearly zero carbon emissions. David Kraft, Technical Fellow at B&W, stated "The CDCL process is the most advanced and cost-effective approach to carbon capture we have reviewed to date and are committed to supporting its commercial viability through large-scale pilot plant design and feasibility studies. With the continued success of collaborative development program with Ohio State, B&W believes CDCL has potential to transform the power and petrochemical industries."