A GPS for Inside Your Body 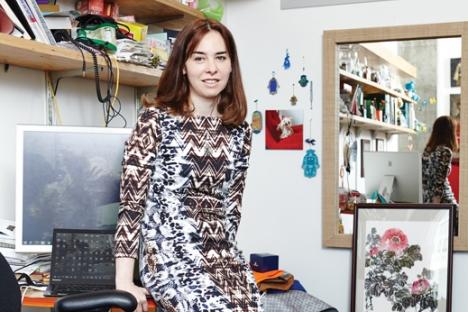 This is MIT professor Dina Katabi.

Medical processes like imaging often require cutting someone open or making them swallow huge tubes with cameras on them. But what if could get the same results with methods that are less expensive, invasive and time-consuming?

Researchers from MIT's Computer Science and Artificial Intelligence Laboratory (CSAIL) led by professor Dina Katabi are working on exactly that with ReMix, a system that they describe as an "in-body GPS." ReMix can pinpoint the location of ingestible implants inside the body using low-power wireless signals. In animal tests the team demonstrated that they can track implants with centimeter-level accuracy, and said that one day similar implants could be used to deliver drugs to specific regions in the body.

To test ReMix, Katabi's group first implanted a small marker in animal tissues. To track its movement, they used a wireless device that reflects radio signals at the patient, and a special algorithm to pinpoint the exact location of the marker. The team used a wireless technology that they've previously demonstrated to detect heart rate, breathing and movement.

Interestingly, the marker inside the body does not need to transmit any wireless signal. It simply reflects the signal transmitted by a device outside the body, without needing a battery or any other external source of energy.

A key challenge in using wireless signals in this way is the many competing reflections that bounce off a person's body. In fact, the signals that reflect off a person's skin are actually 100 million times more powerful than the signals of the metal marker itself.

To overcome this, the team designed an approach that essentially separates the interfering skin signals from the ones they're trying to measure. They did this using a small semiconductor device called a "diode" that can mix signals together so that the team can then filter out the skin-related signals. For example, if the skin reflects at frequencies of F1 and F2, the diode creates new combinations of those frequencies such as F1-F2 and F1+F2. When all of the signals reflect back to the system, the system only picks up the combined frequencies , thereby filtering out the original frequencies that came from the patient's skin.

"The ability to continuously sense inside the human body has largely been a distant dream," says Romit Roy Choudhury, a professor of electrical engineering and computer science at the University of Illinois, who was not involved in the research. "One of the roadblocks has been wireless communication to a device and its continuous localization. ReMix makes a leap in this direction by showing that the wireless component of implantable devices may no longer be the bottleneck."

One potential application for ReMix is in proton therapy, a type of cancer treatment that involves bombarding tumors with beams of magnet-controlled protons. The approach allows doctors to prescribe higher doses of radiation, but requires a very high degree of precision, which means that it's usually limited to only certain cancers.

Its success hinges on something that's actually quite unreliable: a tumor staying exactly where it is during the radiation process. If a tumor moves, then healthy areas could be exposed to the radiation. But with a small marker like ReMix's, doctors could better determine the location of a tumor in real-time, and be able to either pause the treatment or steer the beam into the right position to deal with the movement. (To be clear, ReMix is not yet accurate enough to be used in clinical settings - Katabi says a margin of error closer to a couple of millimeters would be necessary for actual implementation.)

There are still many challenges ahead for improving ReMix. The team next hopes to combine the wireless data with medical information like MRI scans to further improve the system's accuracy. In addition, the team will continue to reassess the algorithm and the various trade-offs needed to account for the complexity of different peoples' bodies.

"We want a model that's technically feasible, while still complex enough to accurately represent the human body," says PhD student Deepak Vasisht, lead author on the new paper. "If we want to use this technology on actual cancer patients one day, it will have to come from better modeling a person's physical structure."

ReMix was developed in collaboration with researchers from Massachusetts General Hospital (MGH). The team says that such systems could help enable more widespread adoption of proton therapy centers, of which there are only about 100 globally.

"One reason that [proton therapy] is so expensive is because of the cost of installing the hardware," says Vasisht. "If these systems can encourage more applications of the technology, there will be more demand, which will mean more therapy centers, and lower prices for patients."