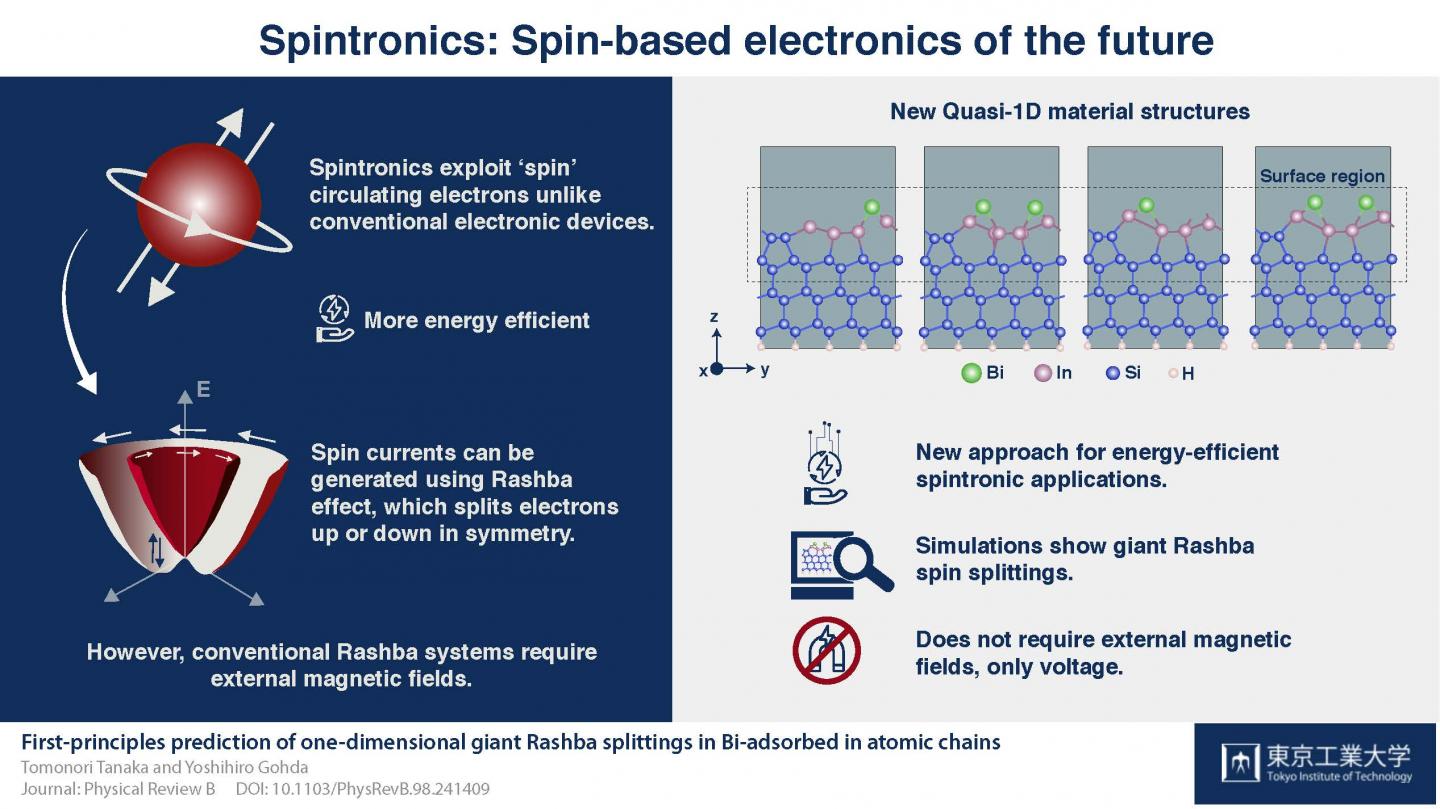 Scientists at Tokyo Institute of Technology proposed new quasi-1D materials for potential spintronic applications, an upcoming technology that exploits the spin of electrons. They performed simulations to demonstrate the spin properties of these materials and explained the mechanisms behind their behavior.

Conventional electronics is based on the movement of electrons and mainly concerns their electric charge; unfortunately, we are close to reaching the physical limits for improving electronic devices. However, electrons bear another intrinsic quantum-physical property called "spin", which can be interpreted as a type of angular momentum and can be either "up" or "down". While conventional electronic devices do not deploy the spin of the electrons that they employ, spintronics is a field of study in which the spin of the conducting electrons is crucial. Serious improvements in performance and new applications can be attained through "spin currents".

As promising as spintronics sound, researchers are still trying to find convenient ways of generating spin currents with material structures that possess electrons with desirable spin properties. The Rashba-Bychkov effect (or simply Rashba effect), which involves a splitting of spin-up and spin-down electrons due to breakings in symmetry, could potentially be exploited for this purpose. A pair of researchers from Tokyo Institute of Technology, including Associate Professor Yoshihiro Gohda, have proposed a new mechanism to generate a spin current without energy loss from a series of simulations for new quasi-1D materials based on bismuth-adsorbed indium that exhibit a giant Rashba effect. "Our mechanism is suitable for spintronic applications, having an advantage that it does not require an external magnetic field to generate nondissipative spin current," explains Gohda. This advantage would simplify potential spintronic devices and would allow for further miniaturization.

The researchers conducted simulations based on these materials to demonstrate that the Rashba effect in them can be large and only requires applying a certain voltage to generate spin currents. By comparing the Rashba properties of multiple variations of these materials, they provided explanations for the observed differences in the materials' spin properties and a guide for further materials exploration.

This type of research is very important as radically new technologies are required if we intend to further improve electronic devices and go beyond their current physical limits. "Our study should be important for energy-efficient spintronic applications and stimulating further exploration of different 1D Rashba systems," concludes Gohda. From faster memories to quantum computers, the benefits of better understanding and exploiting Rashba systems will certainly have enormous implications.