A New 'Golden' Age for Electronics? 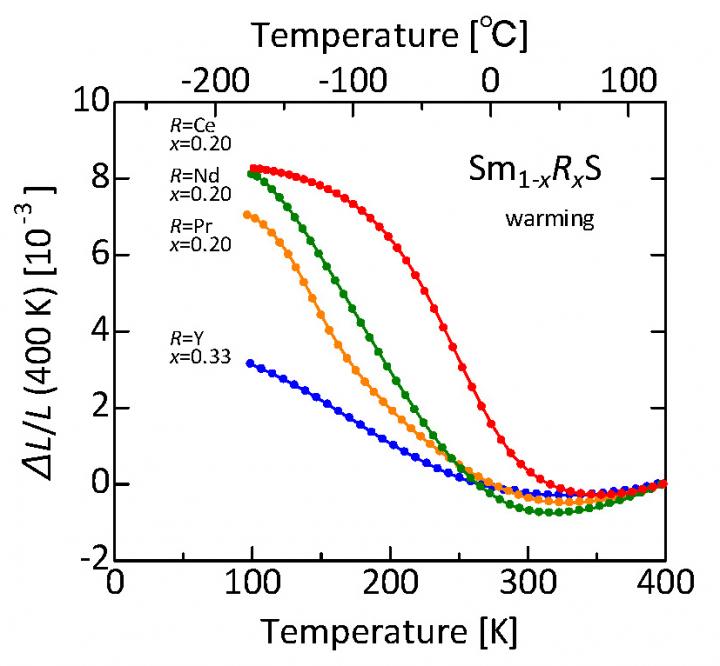 Samarium sulfide doped with various rare earth elements shrinks as the temperature increases from about minus 175°C to about 40-60°C. Shown here is the relative linear shrinkage compared to the length at about 120°C. For the Cerium (Ce) dopant, the percentage volume decrease is about 2.6%. These samples were produced by an industrially scalable process, paving the way for practical applications of this class of sulfides as thermal-expansion compensators.

One way that heat damages electronic equipment is it makes components expand at different rates, resulting in forces that cause micro-cracking and distortion. Plastic components and circuit boards are particularly prone to damage due to changes in volume during heating and cooling cycles. But if a material could be incorporated into the components that compensates for the expansion, the stresses would be reduced and their lifetime increased.

Everybody knows one material that behaves like this: liquid water expands when it freezes and ice contracts when it melts. But liquid water and electronics don't mix well - instead, what's needed is a solid with "negative thermal expansion" (NTE).

Although such materials have been known since the 1960s, a number of challenges had to be overcome before the concept would be broadly useful and commercially viable. In terms of both materials and function, these efforts have only had limited success. The experimental materials had been produced under specialized laboratory conditions using expensive equipment; and even then, the temperature and pressure ranges in which they would exhibit NTE were well outside normal everyday conditions. Moreover, the amount they expanded and contracted depended on the direction, which induced internal stresses that changed their structure, meaning that the NTE property would not last longer than a few heating and cooling cycles.

A research team led by Koshi Takenaka of Nagoya University has succeeded in overcoming these materials-engineering challenges. Inspired by the series of work by Noriaki Sato, also of Nagoya University - whose discovery last year of superconductivity in quasicrystals was considered one of the top ten physics discoveries of the year by Physics World magazine - Professor Takenaka took the rare earth element samarium and its sulfide, samarium monosulfide (SmS), which is known to change phase from the "black phase" to the smaller-volume "golden phase". The problem was to tune the range of temperatures at which the phase transition occurs. The team's solution was to replace a small proportion of samarium atoms with another rare earth element, giving Sm1-xRxS, where "R" is any one of the rare earth elements cerium (Ce), neodymium (Nd), praseodymium (Pr) or yttrium (Y). The fraction x the team used was typically 0.2, except for yttrium. These materials showed "giant negative thermal expansion" of up to 8% at ordinary room pressure and a useful range of temperatures (around 150 degrees) including at room temperature and above (Fig. 1). Cerium is the star candidate here because it is relatively cheap.

The nature of the phase transition is such that the materials can be powdered into very small crystal sizes around a micron on a side without losing their negative expansion property. This broadens the industrial applications, particularly within electronics.

While the Nagoya University group's engineering achievement is impressive, how the negative expansion works is fascinating from a fundamental physics viewpoint. During the black-golden transition, the crystal structure stays the same but the atoms get closer together: the unit cell size becomes smaller because (as is very likely but perhaps not yet 100% certain) the electron structure of the samarium atoms changes and makes them smaller - a process of intra-atomic charge transfer called a "valence transition" or "valence fluctuation" within the samarium atoms (Fig. 2). "My impression," says Professor Takenaka, "is that the correlation between the lattice volume and the electron structure of samarium is experimentally verified for this class of sulfides."

More specifically, in the black (lower temperature) phase, the electron configuration of the samarium atoms is (4f)6, meaning that in their outermost shell they have 6 electrons in the f orbitals (with s, p and d orbitals filled); while in the golden phase the electronic configuration is (4f)5(5d)1 -an electron has moved out of a 4f orbital into a 5d orbital. Although a "higher" shell is starting to be occupied, it turns out - through a quirk of the Pauli Exclusion Principle - that the second case gives a smaller atom size, leading to a smaller crystal size and negative expansion.

But this is only part of the fundamental picture. In the black phase, samarium sulfide and its doped offshoots are insulators - they do not conduct electricity; while in the golden phase they turn into conductors (i.e. metals). This is suggesting that during the black-golden phase transition the band structure of the whole crystal is influencing the valance transition within the samarium atoms. Although nobody has done the theoretical calculations for the doped samarium sulfides made by Professor Takenaka's group, a previous theoretical study has indicated that when electrons leave the samarium atoms' f orbital, they leave behind a positively charged "hole" which itself interacts repulsively with holes in the crystal's conduction band, affecting their exchange interaction. This becomes a cooperative effect that then drives the valence transition in the samarium atoms. The exact mechanism, though, is not well understood.

Nevertheless, the Nagoya University-led group's achievement is one of engineering, not pure physics. "What is important for many engineers is the ability to use the material to reduce device failure due to thermal expansion," explains Professor Takenaka. "In short, in a certain temperature range - the temperature range in which the intended device operates, typically an interval of dozens of degrees or more - the volume needs to gradually decrease with a rise in temperature and increase as the temperature falls. Of course, I also know that volume expansion on cooling during a phase transition [like water freezing] is a common case for many materials. However, if the volume changes in a very narrow temperature range, there is no engineering value. The present achievement is the result of material engineering, not pure physics."

Perhaps it even heralds a new "golden" age for electronics.