A New Playbook for Interference 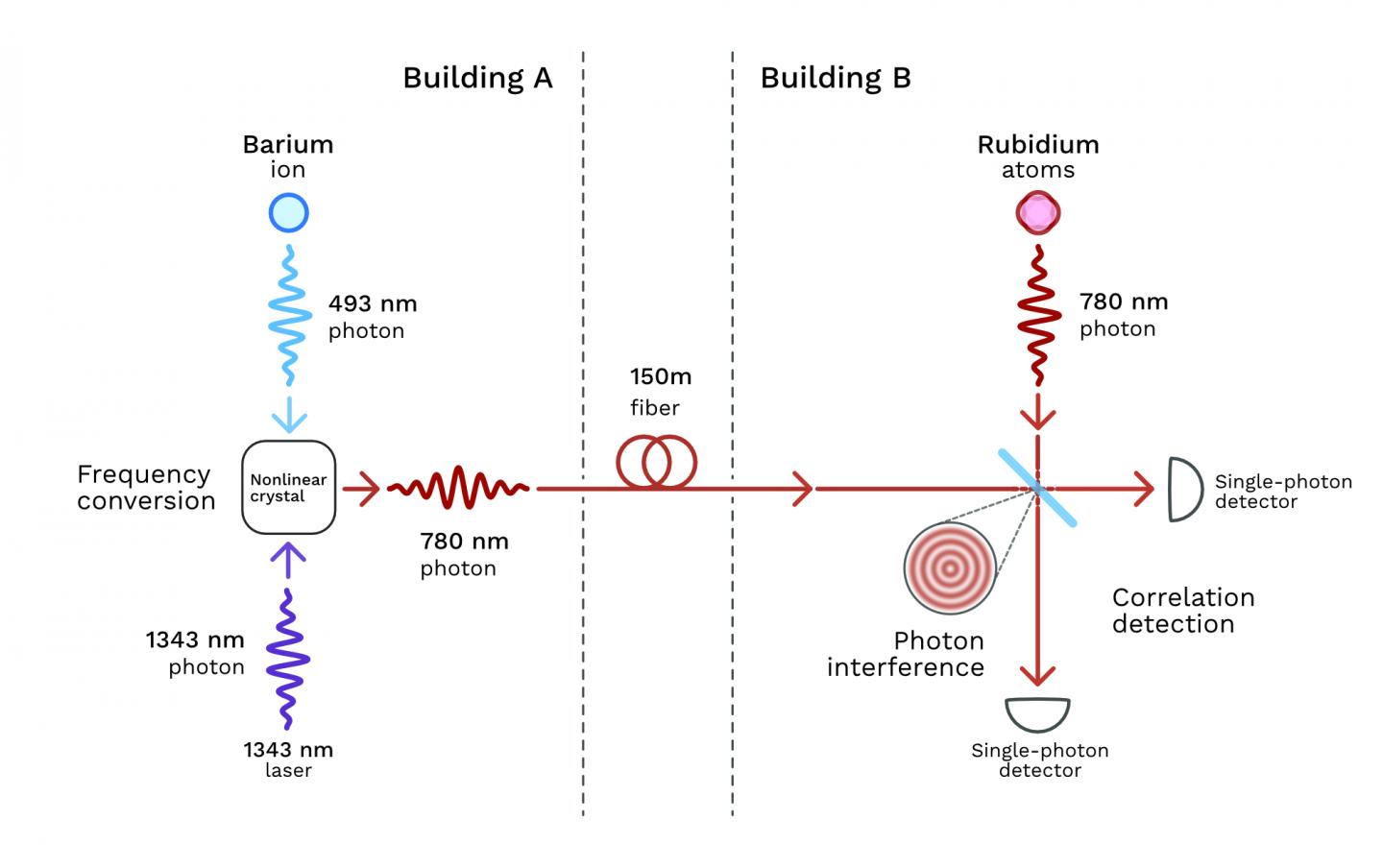 This is a schematic of an interference experiment in which two photons are produced in different buildings, are generated by different sources and have different colors.

Particles can sometimes act like waves, and photons (particles of light) are no exception. Just as waves create an interference pattern, like ripples on a pond, so do photons. Physicists from the National Institute of Standards and Technology (NIST) and their colleagues have achieved a major new feat -- creating a bizarre "quantum" interference between two photons of markedly different colors, originating from different buildings on the University of Maryland campus.

The experiment is an important step for future quantum communications and quantum computing, which could potentially do things that classical computers can't, such as break powerful encryption codes and simulate the behavior of complex new drugs in the body. The interference between two photons could connect distant quantum processors, enabling an internet-like quantum computer network.

Using photons that originally had different colors (wavelengths) is important because it mimics the way a quantum computer would operate. For instance, visible-light photons can interact with trapped atoms, ions or other systems that serve as quantum versions of computer memory while longer-wavelength (near-infrared) photons are able to propagate over long distances through optical fibers.

In their study, a collaboration between NIST and the Army Research Laboratory, physicists and engineers in adjacent buildings at the University of Maryland created two different and separate sources of individual photons. In one building, a group of rubidium atoms was prompted to emit single photons with a wavelength of 780 nanometers, at the red end of the spectrum of visible light. In the other building, 150 meters away, a trapped ion of barium was induced to emit photons with a wavelength of 493 nanometers -- nearly 40 percent shorter --toward the blue end of the spectrum.

Then the researchers had to make the blue photons dead ringers for the red ones. To do this, Alexander Craddock, Trey Porto and Steven Rolston of the Joint Quantum Institute, a partnership between NIST and the University of Maryland, and their colleagues mixed the blue photons with infrared light in a special crystal. The crystal used the infrared light to covert the blue photons into a wavelength matching the red ones in the other building while otherwise preserving their original properties. Only then did the team send the photons through a 150-meter optical fiber to meet up with the nearly identical red photons in the other building.

The photons were so similar that it was not possible to tell them apart in the experimental setup. Individual photons ordinarily act independently of one another. But due to the peculiar quantum nature of light, when two indistinguishable photons interfere with each other, their paths can become correlated, or dependent upon one another. Such quantum correlation can be used as a powerful tool for computing.

Sure enough, the researchers observed this correlation when pairs of the separately produced photons intersected. The pairs of photons passed through an optical component known as a beamsplitter, which could send them in one of two paths. Acting alone, each photon would do its own thing and would have a 50-50 chance of going through either path. But the two indistinguishable photons overlapped like waves. Because of their bizarre quantum interference, they stayed together and always went on the same path. Joining these once-independent photons at the hip, this interference effect can potentially perform many useful tasks in the processing of quantum information.

The researchers reported their findings online in a recent issue of Physical Review Letters.

A direct connection to quantum computing would come if the interference pattern is linked to another bizarre property of quantum mechanics known as entanglement. This phenomenon occurs when two or more photons or other particles are prepared in such a way that a measurement of a particular property -- for instance, momentum -- of one automatically determines the same property of the other, even if the particles are far apart. Entanglement lies at the heart of many quantum information schemes, including quantum computing and encryption.

In the team's experiment, the two photons were not entangled with the systems that generated them. But in future studies, said Porto, it should be relatively easy to entangle the red photons with the group of rubidium atoms that produced it. Similarly, the blue photons could be entangled with the trapped ion that produced them. When the two photons interfere, that connection would transfer the entanglement between red photon-rubidium atoms and blue photon-ion to become an entanglement between the rubidium atoms and the trapped ion.