A New Spin in Nano-Electronics 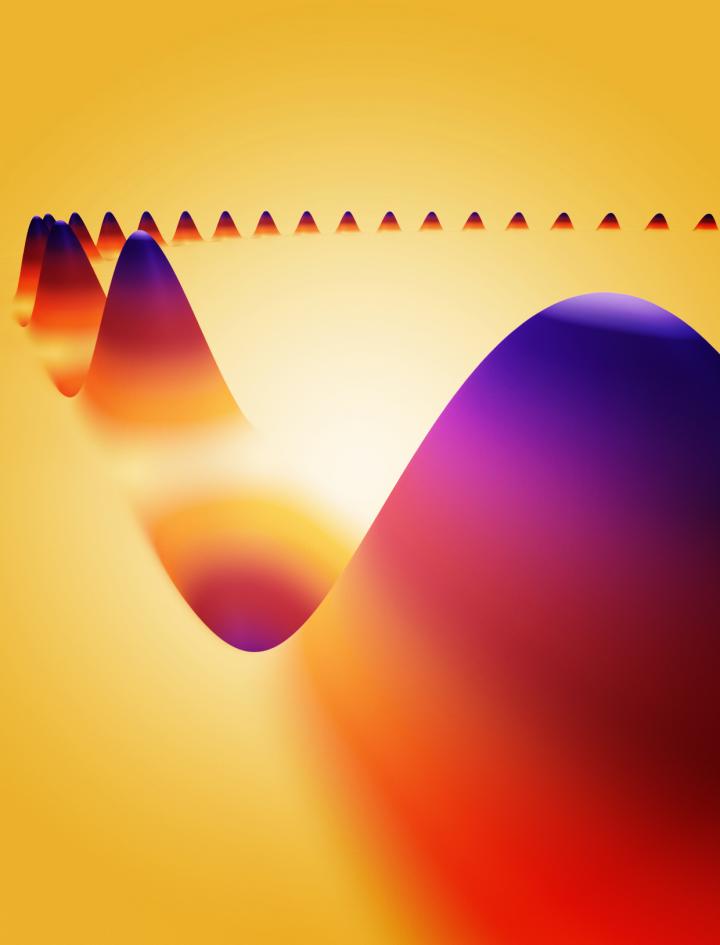 A spin wave spreading along a magnetic domain wall.

In recent years, electronic data processing has been evolving in one direction only: The industry has downsized its components to the nanometer range. But this process is now reaching its physical limits. Researchers at the Helmholtz-Zentrum Dresden-Rossendorf (HZDR) are therefore exploring spin waves or so-called magnons - a promising alternative for transporting information in more compact microchips. Cooperating with international partners, they have successfully generated and controlled extremely short-wavelength spin waves. The physicists achieved this feat by harnessing a natural magnetic phenomenon, as they explain in the journal Nature Nanotechnology (DOI: 10.1038/s41565-019-0383-4).

For a long time, there has been one reliable rule of thumb in the world of information technology: The number of transistors on a microprocessor doubles approximately every two years. The resulting performance boost brought us the digital opportunities we now take for granted, from high speed internet to the smartphone. But as the conductors on the chip get ever more minute, we are starting to face problems, as Dr. Sebastian Wintz from HZDR's Institute of Ion Beam Physics and Materials Research explains: "The electrons that flow through our modern microprocessors heat up the chip due to electrical resistance. Beyond a certain point, the chips simply fail because the heat can no longer escape." This also prevents a further increase in the speed of the components.

This is why the physicist, who is also currently working at the Paul Scherrer Institute (PSI) in Switzerland, envisions a different future for information carriers. Instead of electrical currents, Wintz and his colleagues are capitalizing on a specific property of electrons called 'spin'. The tiny particles behave as if they were constantly rotating around their own axis, thus creating a magnetic moment. In certain magnetic materials, like iron or nickel, the spins are typically parallel to each other. If the orientation of these spins is changed in one place, that disruption travels to the neighboring particles, triggering a spin wave which can be used to encode and distribute information. "In this scenario, the electrons remain where they are," says Wintz, describing their advantage. "They hardly generate any heat, which means that spin-based components might require far less energy."

How can we control the wave?

So far, however, there have been two fundamental challenges complicating the use of spin waves: The wavelengths that can be generated are not short enough for the nanometer-sized structures on the chips, and there is no way of controlling the waves. Sebastian Wintz and his co-workers have now been able to find solutions to both problems. "Unlike the artificially made antennas that are commonly employed to excite the waves, we now use one that is naturally formed inside the material," the first author of the study Dr. Volker Sluka explains. "To this end, we fabricated micro-elements comprising two ferromagnetic disks that are coupled antiferromagnetically via a Ruthenium spacer. Furthermore, we chose the material of the disks so that the spins prefer to align along a particular axis in space, which results in the desired magnetic pattern."

Within the two layers, this creates areas of different magnetization, separated by what is called a domain wall. The scientists then exposed the layers to magnetic fields alternating with a frequency of one gigahertz or higher. Using an X-ray microscope from the Max Planck Institute for Intelligent Systems Stuttgart, which is operated at the Helmholtz-Zentrum Berlin, they were able to observe that spin waves with parallel wave fronts travel along the direction perpendicular to the domain wall. "In previous experiments, the ripples of the wave looked like the ones you get when a pebble hits a water surface," Sluka reports. "This is not optimal, because the oscillation decays quickly as the wave spreads in all directions. To stay in the same analogy, the waves now look as if they were produced by a long rod moving back and forth in the water."

As the X-ray images have shown, these spin waves can travel several micrometers at wavelengths of only about 100 nanometers, without any significant loss of signal - a necessary prerequisite for using them in modern information technology. Moreover, the physicists have discovered a possible way to control this new information carrier when they set the stimulation frequency below half a gigahertz. The spin waves thus remained trapped in the domain wall: "In this scenario, the waves were even able to run in a curve," says Volker Sluka, adding: "Nevertheless we were still able to detect the signals." With their results, the researchers have laid important foundations for the further development of spin wave-based circuits.

In the long run, this might facilitate a completely novel design of microprocessors, Sebastian Wintz predicts: "Using magnetic fields, we can move domain walls relatively easily. That means that chips that work with spin waves don't necessarily need a predefined architecture, but they can later be changed and adapted to fulfill new tasks."