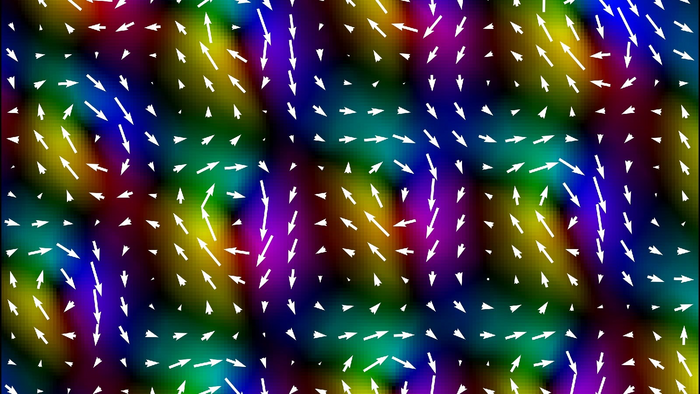 Magnetic fields created by skyrmions in two-dimensional sheet of material composed of iron, germanium and tellurium.

Magnets generate invisible fields that attract certain materials. A common example is fridge magnets. Far more important to our everyday lives, magnets also can store data in computers. Exploiting the direction of the magnetic field (say, up or down), microscopic bar magnets each can store one bit of memory as a zero or a one — the language of computers.

Scientists at the U.S. Department of Energy’s (DOE) Argonne National Laboratory want to replace the bar magnets with tiny magnetic vortices. As tiny as billionths of a meter, these vortices are called skyrmions, which form in certain magnetic materials. They could one day usher in a new generation of microelectronics for memory storage in high performance computers.

“The bar magnets in computer memory are like shoelaces tied with a single knot; it takes almost no energy to undo them,” said Arthur McCray, a Northwestern University graduate student working in Argonne’s Materials Science Division (MSD). And any bar magnets malfunctioning due to some disruption will affect the others.

“By contrast, skyrmions are like shoelaces tied with a double knot. No matter how hard you pull on a strand, the shoelaces remain tied.” The skyrmions are thus extremely stable to any disruption. Another important feature is that scientists can control their behavior by changing the temperature or applying an electric current.

Scientists have much to learn about skyrmion behavior under different conditions. To study them, the Argonne-led team developed an artificial intelligence (AI) program that works with a high-power electron microscope at the Center for Nanoscale Materials (CNM), a DOE Office of Science user facility at Argonne. The microscope can visualize skyrmions in samples at very low temperatures.

The team’s magnetic material is a mixture of iron, germanium and tellurium. In structure, this material is like a stack of paper with many sheets. A stack of such sheets contains many skyrmions, and a single sheet can be peeled from the top and analyzed at facilities like CNM.

“The CNM electron microscope coupled with a form of AI called machine learning enabled us to visualize skyrmion sheets and their behavior at different temperatures,” said Yue Li, a postdoctoral appointee in MSD.

“Our most intriguing finding was that the skyrmions are arranged in a highly ordered pattern at minus 60 degrees Fahrenheit and above,” said Charudatta Phatak, a materials scientist and group leader in MSD. ​“But as we cool the sample the skyrmion arrangement changes.” Like bubbles in beer foam, some skyrmions became larger, some smaller, some merge and some vanish.

At minus 270, the layer reached a state of nearly complete disorder, but order came back when the temperature returned to minus 60. This order-disorder transition with temperature change could be exploited in future microelectronics for memory storage.

“We estimate the skyrmion energy efficiency could be 100 to 1000 times better than current memory in the high performance computers used in research,” McCray said.

Energy efficiency is essential to the next generation of microelectronics. Today’s microelectronics already account for roughly 10% of the world’s electricity. And that number could double by 2030. More energy-efficient electronics must be found.

“We have a way to go before skyrmions find their way into any future computer memory with low power,” Phatak said. ​“Nonetheless, this kind of radical new way of thinking about microelectronics is key to next generation devices.”

This research was supported by the DOE Office of Basic Energy Sciences. The team’s machine learning program was run on supercomputing resources at the Argonne Leadership Computing Facility, a DOE Office of Science user facility.

This research appeared in Nano Letters. In addition to Phatak, Li, and McCray, Argonne authors include Amanda K. Petford-Long, Daniel P. Phelan and Xuedan Ma. Other authors include Rabindra Basnet, Krishna Pandey and Jin Hu from the University of Arkansas.