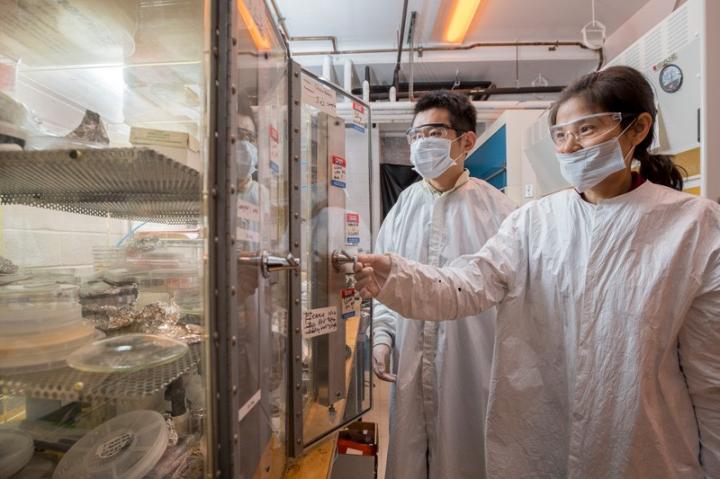 Many of the technologies we rely on, from smartphones to wearable devices and more, utilize fast wireless communications. What might we accomplish if those devices transmitted information even faster?

That's what Yuping Zeng, assistant professor of electrical and computer engineering at the University of Delaware, aims to discover. She and a team of researchers recently created a high-electron mobility transistor, a device that amplifies and controls electrical current, using gallium nitride (GaN) with indium aluminum-nitride as the barrier on a silicon substrate. They described their results in the journal Applied Physics Express.

Among devices of its type, Zeng's transistor has record-setting properties, including record low gate leakage current (a measure of current loss), a record high on/off current ratio (the magnitude of the difference of current transmitted between the on state and off state) and a record high current gain cutoff frequency (an indication of how much data can be transmitted with a wide range of frequencies).

This transistor could be useful for higher bandwidth wireless communication systems. For a given current, it can handle more voltage and would require less battery life than other devices of its type.

"We are making this high-speed transistor because we want to expand the bandwidth of wireless communications, and this will give us more information for a certain limited time," said Zeng. "It can also be used for space applications because the gallium nitride transistor we used is radiation robust, and it is also wide bandgap material, so it can tolerate a lot of power."

This transistor represents innovation in both material design and device application design. The transistors are made on a low-cost silicon substrate, "and this process can also be compatible with silicon Complementary metal-oxide-semiconductor (CMOS) technology, which is the conventional technology used for semiconductors," said Zeng.

The transistor described in the recent paper was just the first of many to come.

"We are trying to continue to break our own record, both for the low power application as well as for the high-speed application," said Zeng. The team also plans to use their transistors to make power amplifiers that could be particularly useful for wireless communications as well as other internet-of-things.

Zeng's group is also working on titanium oxide transistors which are transparent and could be used for backplane displays, competing with the technology for currently commercially used indium-gallium-zinc oxide (InGaZnO) transistors.

Dennis Prather, Engineering Alumni Professor of Electrical and Computer Engineering, was a co-author on the Applied Physics Express paper.

"With the era of 5G upon us, it's very exciting to see Professor Zeng's record setting transistors as a leading contribution to this field," he said. "Her research is world renowned and the ECE Department is very lucky to have her on its faculty. To this end, 5G is ushering in a wave of new technologies in nearly every aspect of mobile communications and wireless networks, to have UD's ECE department at the leading edge, with Professor Zeng's outstanding research, is truly a wonderful thing."