Advance in Understanding of All-Solid-State Batteries

Identifying a battery failure mechanism to engineer a better battery 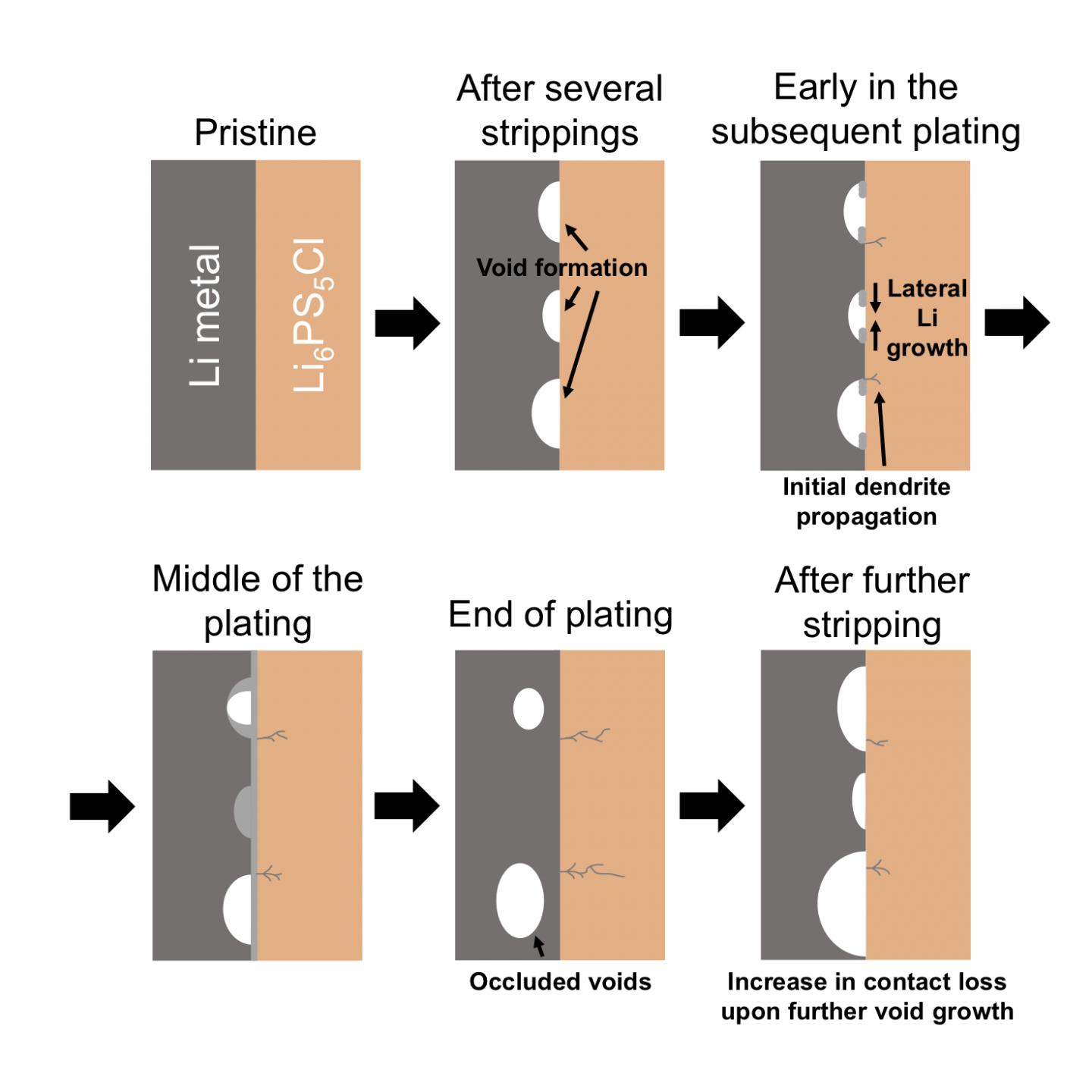 Schematic of Li metal/Li6PS5Cl interface cycled at an overall current density above the CCS.

HARWELL, UK -- All-solid-state batteries, a battery design composed of all solid components, have gained attention as the next major advance beyond lithium ion batteries because of their potential to store more energy while being safer to operate. When capable of being produced in commercial quantities, solid-state batteries would revolutionise electric vehicles (EVs) effectively increasing driveable range or significantly decreasing volume and weight.

Yet solid-state batteries can fail after cycling (repeated charging and discharging) at practical currents, which has been one of the barriers preventing their mass commercialisation.

In a new paper published by Nature Materials entitled "Critical Stripping Current Leads to Dendrite Formation on Plating in Lithium Anode Solid Electrolyte Cells," Faraday Institution researchers at the University of Oxford have taken a step forward in understanding the mechanisms by which solid-state batteries fail--a necessary prerequisite to avoiding such failures.

Dendrites are branching networks of lithium which grow through the solid, ceramic, electrolyte during charging of a battery, causing a short circuit.

"This research adds to our fundamental knowledge of why solid-state batteries behave the way they do. We believe our improved understanding will help to inform approaches to avoid some of the problems at the lithium metal anode in solid electrolyte cells," commented Professor Peter G. Bruce of the University of Oxford's Departments of Materials and Chemistry and Principal Investigator of the Faraday Institution's SOLBAT project, whose team led the research.

Void creation at the anode of solid-state cells has long been recognised, but their role in dendrite formation has not been understood. The study uses a combination of cutting edge electrochemical and imaging techniques to form a fundamental understanding of void formation as a function of cycling and its role in dendrites and cell failure.

Significantly, parameters in the failure model correlate to key physical properties that could be used as "levers" to suppress void formation and cell failure.

"It is key to break down the scientific barriers that prevent the progression to market of technologies that will enable our vision of the future of mobility. The study by Oxford researchers is one early example of a scientific advance that the Faraday Institution was set up to drive," said Tony Harper, Director of the ISCF Faraday Battery Challenge at UK Research & Innovation.

The research: importance of critical current density on stripping

One well-recognised challenge facing scientists studying solid-state batteries is to prevent dendrite growth as batteries are cycled between a charged and uncharged state (as they would repeatedly have to do if they to be used to power EVs).

Another significant problem is void formation between the solid electrolyte and lithium anode (negatively charged electrode) during stripping (discharge of a battery), which leads to a reduced area of contact between those two parts of the battery cell.

It is difficult to separate lithium plating from stripping using an experiment with a battery cell containing the usual two electrodes. In this study researchers used three-electrode cells to study separately the processes of plating and stripping lithium metal at the lithium metal / ceramic interface on battery cycling. Argyrodite, Li6PS5Cl, was chosen as the solid electrolyte. Such sulphides have higher conductivity than oxides and are being pursued as the electrolyte of choice by several companies attempting to commercialise solid-state batteries. Argyrodite has the advantage of being less brittle than other highly conducting sulphides.

The team working on this discovery included a mix of theoreticians and experimentalists, in the type of multi-disciplinary research environment that the Faraday Institution fosters.

Small, non-rechargeable, solid-state batteries are growing in commercial use, for example, in medical implants such as heart monitoring. However, there remain considerable challenges associated with both the fabrication of solid-state batteries at the scale required for use in EVs, and to ensure that such devices operate safely and to acceptable performance levels over the lifetime of the EV.

Current lithium ion batteries used in EVs contain a flammable organic liquid electrolyte, through which charge-carrying lithium ions pass during the charging and discharging of the battery. This liquid presents an inherent (albeit well-managed) safety concern. The replacement of the liquid electrolyte with a solid would remove this fire risk.

Worldwide, significant scientific effort is being expended to develop new battery chemistries that would achieve battery performance (power density and energy density) that would give an EV driving experience aligned with expectations from driving cars with internal combustion engines. The elimination of the need for a liquid electrolyte would be a prerequisite for developing batteries with a lithium metal anode, which could unlock significant performance improvements.