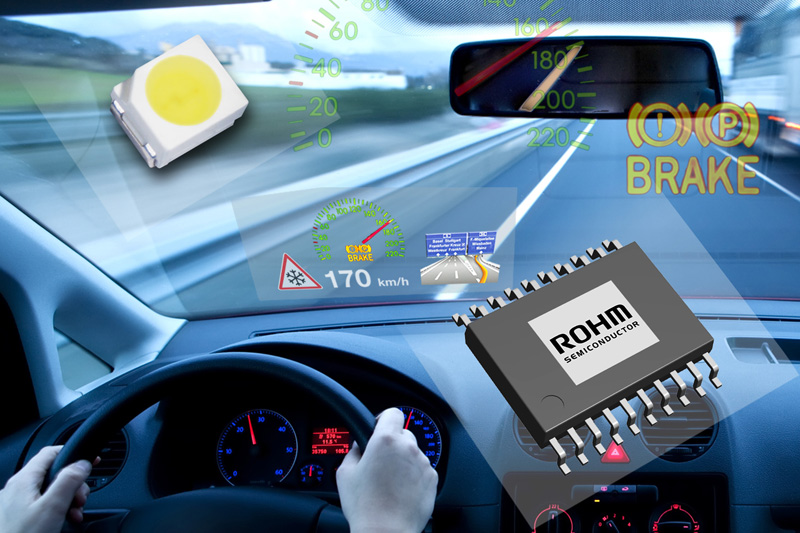 The usage of LEDs in automotive applications continues to grow due to their longer service life and lower power consumption. Simultaneously, the diversity and size of integrated state-of-the-art instrument cluster displays and in parallel the increasing complexity of automotive instrument clusters increase the demand in the LED technology. It is no longer sufficient to simply drive the LED with discrete components. What is really needed is a precise and constant light output for the different LEDs while dimming as well, for example, to different ambient light conditions. Demanding automotive environments also require several protection circuits and diagnostic functions in order to prevent a complete failure due to a single component in the fault state. Moreover, the fact that more and more performance has to be accommodated in a small space puts high demand onto the electronic circuits. Ultimately, a technological solution should also satisfy the different requirements of the automotive manufacturers in terms of color scheme, and provide the appropriate versatility and design options. This article will describe one approach to a 12-channel LED driver solution which ROHM feels provides an ideal answer to these requirements, and which is well-suited for applications including a large number of LEDs such as automotive backlight applications. An LED driver can be developed in a way that it provides a combination of serial and parallel LED control in order to address displays in instrument clusters, specific panels as well as panel elements in the center console such as air conditioning and radio. Components with this feature offer developers the flexibility to drive LEDs in various applications with a single driver and therefore save development and qualification time. Such highly integrated LED drivers have many advantages over simple current limiting circuits, as they reduce the need for external components and take up less space on the PCB. 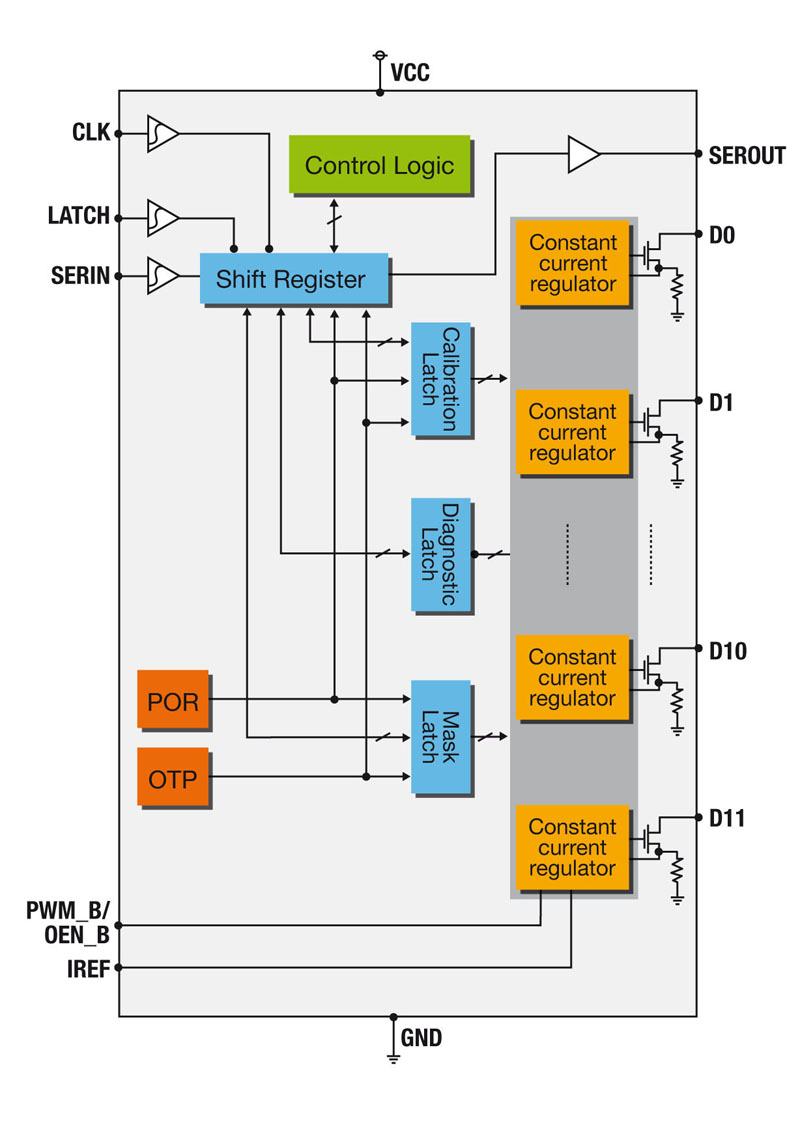 ROHM has developed an LED driver which includes twelve constant current drivers in a single chip to control a large number of LEDs, a 6-bit per channel power calibration, and a global PWM brightness control as well as diagnostic functionality. Combined with the ultra flat RGB LEDs of the SRGB series the AEC-Q100 qualified device in a compact HTSSOP20 packaging offers a complete solution for automotive clusters. The first requirement for the LED power management is to provide constant current with high accuracy at the outputs to avoid fluctuating supply voltage and different LED VF values as well as different influences on the LED current and thus unwanted brightness variations. ROHM addressed this via a three-channel serial input (Serial-in, clock, latch-in) that controls a total of twelve driver channels to drive multiple LEDs with an output current of 15 to 50 mA per channel. The regulation of the maximum current is done via an external resistor. If additional power is needed, multiple channels can be activated in parallel. Via the serial interface register settings can be read too in order to verify the settings at any time. This way, the driver can also address the built-in diagnostics functions. It also enables the detection of open or shorted connections (faulty LEDs) and to take appropriate countermeasures in order to prevent the failure of the entire system. (See Figure 1.) 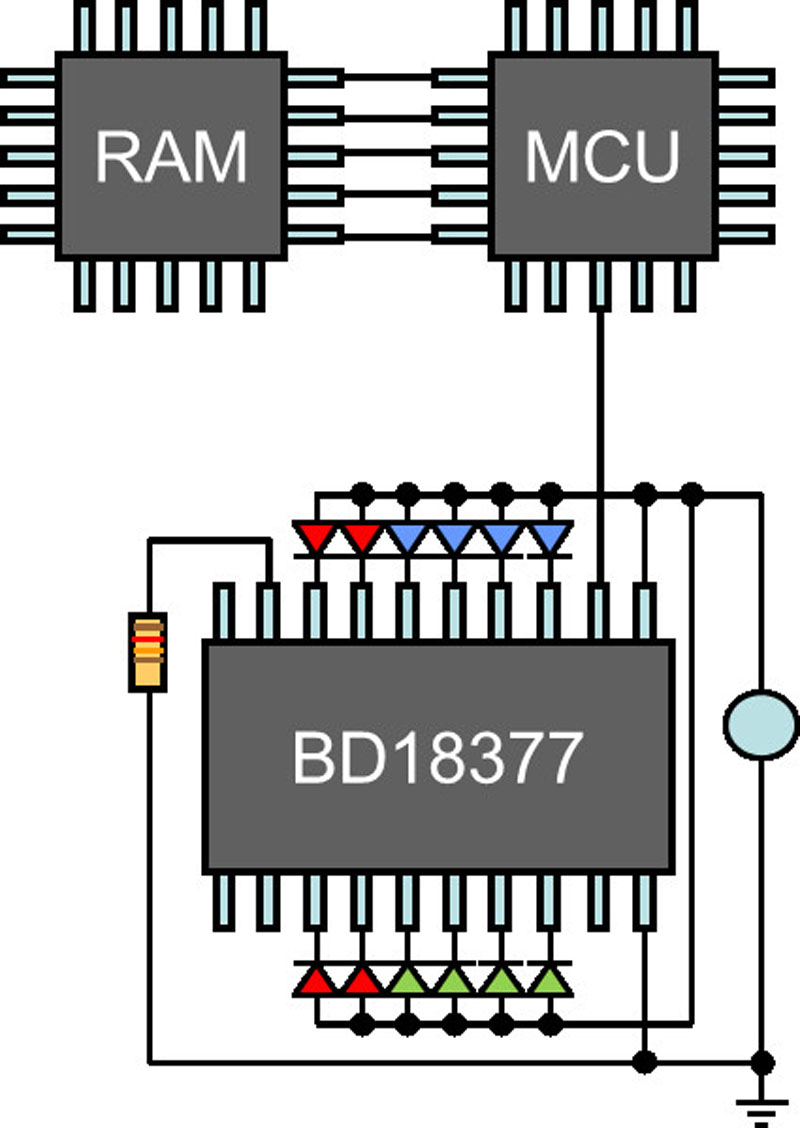 Similarly, a too high temperature on the chip can be detected as well. If the temperature rises above 125° C, a warning indicator is set within this solution while the chip remains fully functional. However, measures can be taken (for example the reduction of the brightness of the global PWM dimming) to prevent that the temperature is further rising. In such a case, multiple LED drivers can communicate with each other by means of a proprietary communication line to reduce the performance. In case that the temperature still rises, a power-on reset is conducted when it exceeds 150°C in order to protect the chip from irreparable destruction. The BD18377 device also sets standards when it comes to output current accuracy. At 30 mA, an accuracy is achieved of + / -2.5% from channel to channel (of one device) as well as of +/-1,7% between two different devices. The brightness of each LED can be individually adjusted via current control, calibrating from 1,6% up to 100% (6 Bit). Additionally, a global calibration of 0.1% to 100% is possible via PWM. Thus, LEDs with different brightness from different binnings can be deployed without having these adjusted to different resistor values. Only the register settings must be adjusted to the deployed LEDs. This way, subjective differences between LEDs featuring different colors can be regulated as well. (See Figure 2.) 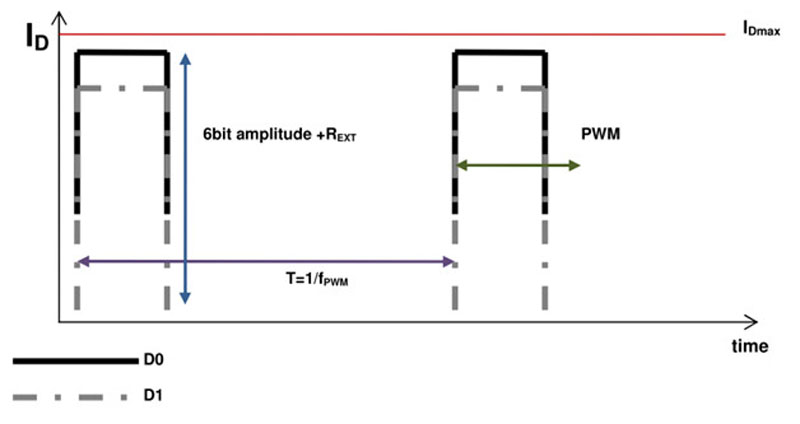 Advanced dimming The latest panel specifications define a brightness range that starts at very low light intensities, and can be widely scaled. Moreover, in order to implement different RGB color combinations, each LED must receive a dedicated dimming signal which can be set separately. Figure 3 shows the calibration and dimming of the output current and the ratio of these two settings. The maximum current IDmax is adjusted via an external resistor Rext. The adjustment of the calibration bit changes the current value of the associated channel while the duty cycle in all active channels is simultaneously regulated through the PWM input. The PWM input is completely independent of the clock signal. The use of a "PWM Control CR timer" block in addition to the switching regulator enables the adjustment of the modulation frequency and the duty ratio for a given product at a fixed resistor capacitor combination. The time required for the design is in this case reduced by the ability to use a single product platform. This way, less expensive (and overall less) devices can be used for the design. In the given example, D0 and D1 are calibrated at a value below the maximum current, and D1 has set a lower current than D0. As indicated, the brightness of both channels can be simultaneously influenced by the PWM signal. Due to the fact that the defined current value and the duty cycle are independent of each other, it is ensured that the calibration of each of the channels does not affect the dimming curve and that no clang delay occurs. The propagation delay during the rise and fall has the same sizes and guarantees the linearity between input and output. Diagnostics and reliability High reliability in automotive applications is indicated by the need for protection circuits against over voltage, under voltage, polarity, overcurrent, short circuit and heat. Particularly overheating - especially in case of excessive system voltage - is a challenge in LED solutions due to the dependence of the current from the supply voltage. The voltage in cars ranges from a normal operating voltage of 9 V to 16 V (normal is 14 V) to load the 12.6 battery. In addition, one has to consider extreme conditions such as inverse polarity protection up to 12V, jump start aid conditions with continuous double battery voltage (+24V) to failures such as load dump / over voltage which occurs when the battery is disconnected from the generator while the engine is running, as well as other power transitions. An undamped load drop may take several hundred milliseconds and easily exceed 80V but nowadays, many manufacturers have centralized limiting circuits for a load drop and therefore demand that components resist transient voltages of a range between 60 or 40V. In order to meet the specifications of car manufacturers in terms of warranty requirements which may last more than 10 years, the BD18377 offers several features for system protection. Hence, shorted and open circuits are detected which could lead to high currents and voltages at the LED output. The extensive diagnostic functions can identify errors and can be read by the microcontroller. This allows corrective actions to be taken to prevent the destruction of individual components. Doing so, the reliability of the cluster can be increased significantly, and an expensive replacement of a complete system can be avoided in terms of cost minimization. Summary The presented LED driver - in combination with the SRGB RGB LED series - provides developers a complete solution for the energy-efficient and reliable lighting of vehicle clusters in a small, compact packaging and is also compatible with other device series. With its built-in protection functions it meets the demanding industry standards and stringent purchasing specifications of the automotive industry. The multi-channel configuration also allows the usage for various functions. The built-in communication features enable the individual adjustment of LED currents and voltages as well as protection functions which are different from one application to another. This facilitates the design of a consistent platform solution. ROHM will continue the development of multi-channel LED drivers featuring integrated communication capabilities to further drive these integration possibilities. ROHM Semiconductor