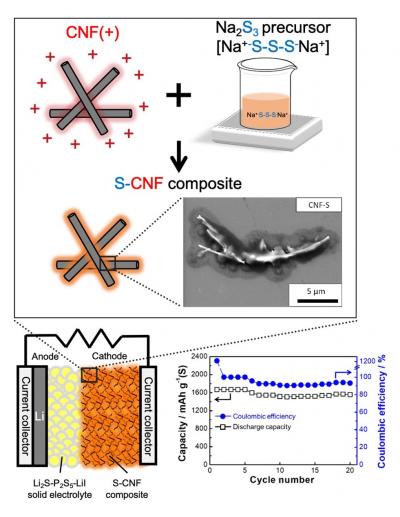 Lithium-ion secondary batteries, which was awarded the Nobel Prize in chemistry last year, have been widely used as power sources for smartphones, electric vehicles, etc. All-solid-state batteries have also attracted attention as next-generation batteries in recent years because of the increase with hybrid and electric vehicles. In particular, all-solid-state lithium-sulfur batteries have attracted attention because of five times higher energy density than conventional lithium-ion secondary batteries. However, sulfur is an insulator, which thus limits their application in battery devices. In order to solve this issue, sulfur must be provided with an ionic and electron-conductive path.

The first author, Assistant Prof. Nguyen Huu Huy Phuc of Toyohashi University of Technology explained its features "It is required that a sulfur active material and a carbon material are appropriately combined for making high-performance all-solid-state lithium sulfur batteries. Conventionally, sulfur-carbon composites were synthesized by mechanical mixing, liquid mixing using a special organic solvent and complicated methods, in which sulfur is combined with a porous carbon material with a high specific surface area. However, there were few reports that all-solid-state lithium sulfur batteries showed high capacity almost equivalent to the theoretical capacity of sulfur and high cycle stability. Therefore, we focused on making a sulfur-carbon composite using a low-cost and simple electrostatic adsorption method which can uniformly combine nanomaterials. It was confirmed that sulfur at the sulfur-carbon composite synthesized by electrostatic adsorption method was accumulated on carbon nanofiber in the form of sheets. Besides, we constructed all-solid-state lithium sulfur batteries and found that sulfur was fully utilized as an active material. The other merit is that this sulfur-carbon composite can be produced by lower cost than conventional processes."

This method is a low-cost and relatively simple method for preparing sulfur-carbon composites, so it is suitable for mass production. All-solid-state lithium-sulfur batteries using a sulfur active material will be put to practical use by this method. Besides, it is expected the exponential improvement in the energy density of electric vehicles, large-sized power source batteries for household and business use.