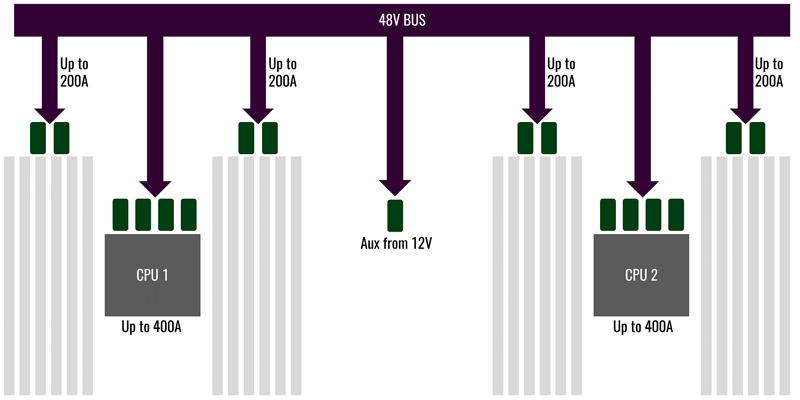 Developing power system solutions for advanced and demanding applications such as data centres is challenging enough without the additional concern of being locked in to a single supplier. Forward-thinking companies in the power module industry have recognised that users of DC-DC power modules, especially those with 48V direct conversion needs are looking for compatible products from independent alternate sources.

In order to address this need, the Power Stamp Alliance (PSA) (www.powerstamp.org) was recently launched to deliver the twin goals of providing customers with choice between compatible solutions while allowing power manufacturers to compete and deliver the best technical solutions to customers worldwide.

In this article, Flex - a founder member of the PSA - explores the benefits of the new alliance to the customer including the specifications that define compatibility and the benefits of 48V direct conversion in efficiency-sensitive applications such as data centres.

Modern supply chain management and many company policies demand that for critical (if not all) components in a design, at least one alternate source is available. This protects the OEM from availability issues and allows for a degree of competitiveness between vendors, ensuring that costs are controlled.

However, the power module industry has been known for suppliers developing their own footprints and mechanical outlines meaning that, while switching suppliers is possible, it normally involves a re-spin of the PCB and a re-qualification of the new device. This not only introduces costs but also can be a lengthy process and also involves an element of risk.

In order to address this issue and provide a degree of standardisation a number of alliances have been developed within the power module sector. While many of these have covered generic products, when the alliance is focussed on a narrow but important technology sector then the impact on customers is often more beneficial.

One of the newest alliances is the PSA which is very firmly focussed on advanced high current power modules for processors, memory and ASICs – although the technology could be used in other applications as well.

The primary goal of the PSA is to provide a multi-sourced, standard power module solution for conversion from a nominal 48V to low voltages at high currents. In order to accommodate as many devices as possible and provide future proofing, the PSA architecture is fully scalable in terms of power / current.

The PSA has decided to focus on stipulating footprint and function only for the ST Microelectronics-based power stamps, leaving the electrical performance to be determined by each of the PSA member companies.

The PSA also stipulates that stamps shall be built from existing processes, thereby allowing for high-volume production with minimal risk, ensuring good availability of products to maintain the supply chain.

At a system level the PSA is based on 100A-capable stamps and systems can be configured with up to six stamps (one main and up to five satellites), giving a 600A capability to the system. If, during operation the current demand decreases, then in-built controls will allow satellite stamps to be automatically disabled, thereby ensuring optimum levels of efficiency across a wide current range from 100A to 600A.

While the mechanical envelope is fixed for PSA devices, the envelope has been defined by the application for maximum user convenience. Four PSA stamps can be placed along one edge of a 58mm x 58mm processor, meaning that up to 400A can be generated locally to the processor eliminating the need for long high current traces.

PSA solutions are fully digitally controlled on the secondary side, allowing for PMBus AVS or standard SVID control of the stamps. These standards are fully implemented internally to the modules, allowing the power solution to be optimised for any given application.

When used with two VR13-HC processors and two banks of DDR memory (for example), up to 400A is required for the processor and 200A will be required for each memory bank.

The power needs of a system such as this can be achieved by using a several power stamps. The main power stamp that acts as a control stage for up to five satellite stamps as well as providing up to 100A of power itself. The satellites each provide up to 100A of power and are solely controlled by the main stamp, there is no direct user interface required to the satellite stamps. The main stamp can automatically disable (and re-enable) any satellite stamps that are not needed due to dynamically changing loads, thereby ensuring that optimum efficiency is achieved at all times. 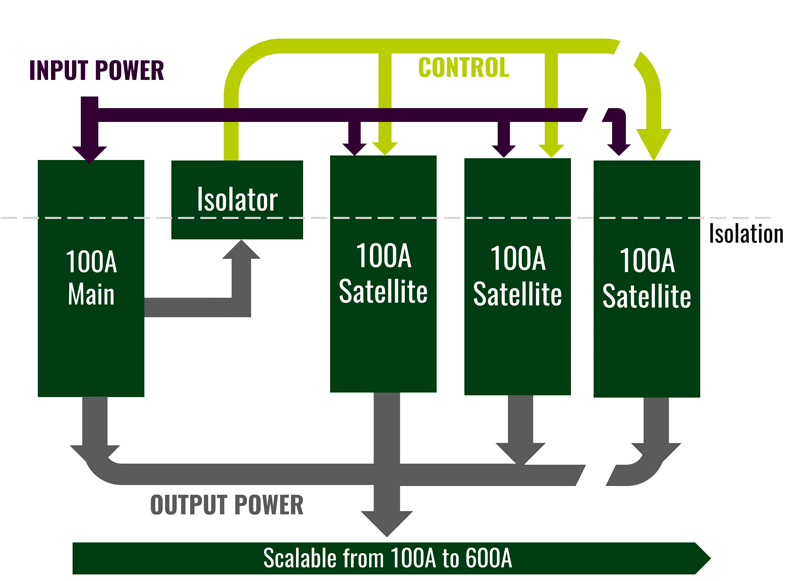 The size and footprint of the main and satellite stamps is defined by the PSA, with both modules having the same footprint. The main module has a separate control PCB with a satellite module embedded on top of it and LGA-PAD terminations while the satellite uses block pins. The pin layout has been the subject of much thought and discussion so that similar signals are grouped together and placed close to the edge, allowing for easy inter-module connectivity. Ground connections are placed close to the centre of the modules.

Designers are able to access reference design boards through any PSA member to allow for rapid prototyping and development of PSA module based power solutions. PSA members are developing or already able to offer PSA-compliant modules with output voltages of 0.9V, 1.0V and 1.8V. 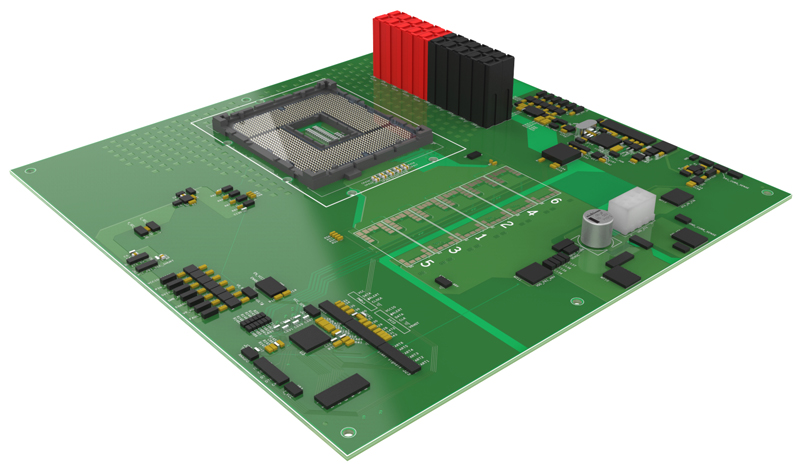 The benefits of direct conversion

One of the most notable features of PSA is that it implements direct conversion from the nominal 48V rail to the voltage required by the load. Until recently, telecom and datacom power had used a two-stage conversion converting the semi-regulated 48V distribution rail to 12V using an intermediate bus converter (IBC).

In this intermediate bus architecture (IBA), the IBC provided the first stage of conversion and also the isolation for the system. A second level of conversion was then provided by non-isolated point-of-load (niPOL) that converted the 12V intermediate rail into the voltages needed by the load – typically low voltages for processors, memory and ASICs.

While there were a number of benefits of this approach, including the single point of isolation which reduced overall system cost, the major drawback was the relatively low level of efficiency when compared with a single conversion stage. 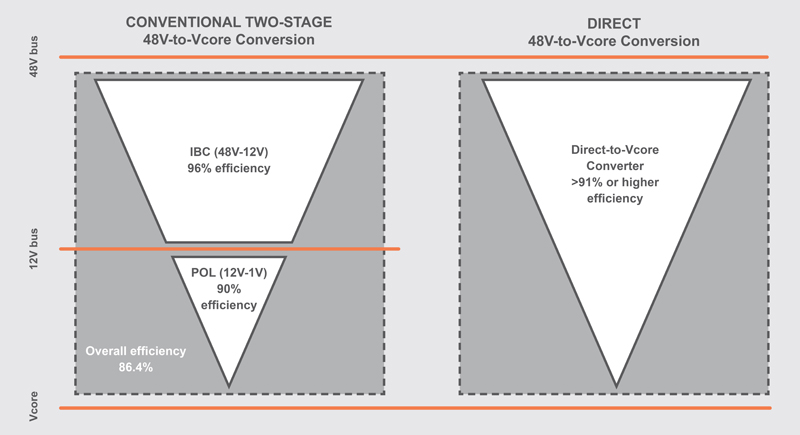 While the IBC and niPOL individually have high levels of efficiency when used in a standalone mode (typical values are 96% and 90% respectively), this reduces the overall conversion efficiency from 48V to the load to around 86.4%. In comparison, a single stage isolated converter (such as  a PSA stamp) can achieve efficiency at targeted loads in the region of > 91%.

If we consider a typical processor / memory application requiring 600A at 1V DC, then the two-stage conversion with an efficiency of 86.4% would generate around 94.4W of heat, whereas the single stage conversion would improve this by 35W to 59.4W.

As an additional benefit, as the single stage conversion distributes 48V, the current in bus bars will be 25% of that in two stage conversion systems that distribute 12V. As a consequence the losses in the bus bars (I2R) will reduce to 1/16 of those with the two-stage system.

While these figures will seem small, they relate to a single processor and memory combination. Even in a relatively modest data centre there will be thousands of processors, so the modest savings per processor become very significant. Not only will the running costs be reduced, but power footprints will be reduced by approximately 50%. This means that significantly more power can be delivered in the same space as before, or the power supply can be smaller.

Efficient power conversion and choice of interoperable vendors of power solutions are both high on the agenda of companies that build processor-based systems. Through defining the form factor and core functionality of the single stage conversion power stamps, PSA has achieved both of these goals while allowing vendors to continue to compete to bring the most efficient and technically advanced solutions to market.