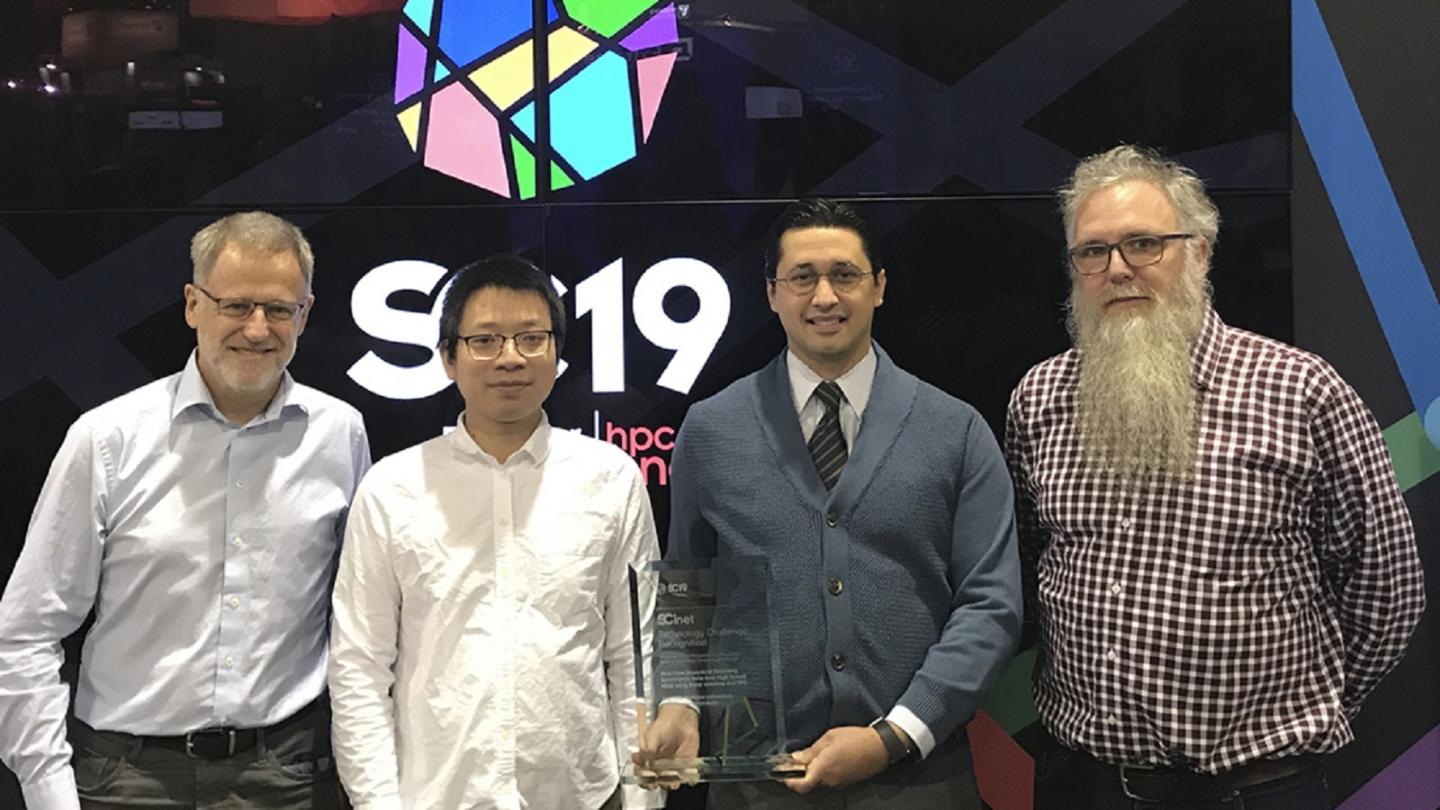 An extensive collaboration led by Argonne recently won the Inaugural SCinet Technology Challenge at the Supercomputing 19 conference by demonstrating real-time analysis of light source data from Argonne's APS to the ALCF.

In addition to those from Argonne, the extensive team included members from Northwestern University, the Starlight Communications Exchange, Northern Illinois University, the University of Chicago and the Metropolitan Research and Education Network.

"We built a software infrastructure that connects APS beamlines with remote high-performance computing resources and demonstrated that even computationally demanding data streams can be analyzed with low latency," said Tekin Bicer, an assistant computer scientist at Argonne, who led the demonstration at SC19. "We put significant time and effort into this work, so I am very happy that the importance of our project and demonstration has been recognized."

The team analyzed a portion of the data using 16,384 cores on Argonne's Theta supercomputer. The analysis output was then streamed to Argonne's visualization cluster, Cooley, which rendered a 3D image. The final output was streamed back to the show floor in real time, approximately 10-20 projections per frame, and with data remaining in memory throughout the entire workflow.

"In order to make full use of the upcoming APS Upgrade, we really need to be able to analyze data in close to real time to make decisions on what to do next," added Stefan Vogt, associate director of Argonne's X-ray Science division. "Such analysis, and the fact that we have no place to put huge amounts of raw data, will require the ability to stream data into HPC-type resources as we acquire it."

"I got very excited about the technology challenge as its goal was very much in line with the research and development activities of our group," said Kettimuthu, a computer scientist on the team. "My colleagues, Tekin Bicer and Zhengchun Liu, readily took the lead on this project and put in a tremendous amount of work. Such contributions from the entire team and strong support from the ALCF operations team made the demo successful."

As part of the workflow demonstrated by the team during the competition, the researchers streamed data from the SC19 show floor in Denver to Argonne's Theta system using zeroMQ and Globus data transfer software. The data streamed was equivalent to that from 10 high-data-rate light source beamlines.

The supercomputer processed the data from one of the beamlines in real time, storing the remainder for later analysis. This real-time processing step involves using the lab's Cooley visualization cluster for iterative reconstructions of a 3D volume from 2D images obtained at a microtomography imaging beamline.

The team streamed the processed results back to the SC19 show floor in Denver for near real-time visualization. The first results streamed within 5-10 seconds of the start of the experiment and continued at that rate until the end of the experiment. Careful management was required to ensure that the streaming flows of various data acquisition and analyses could co-exist without interference.

"The team really pushed forward the limits of technology," said Ian Foster, Argonne distinguished fellow and director of the Data Science and Learning division. Foster initiated the ?"bandwidth challenge" at SC2000 -- a precursor to the inaugural SCinet Technology Challenge -- to spur the HPC community toward delivering innovative applications that will efficiently utilize the SCinet network and add significant value.

A demonstration of this scale requires a tremendous amount of teamwork, particularly when last-minute obstacles arise. For example, the team ran into an unexpected network problem just a few hours before the demonstration. Significant coordination and outstanding teamwork by ALCF operations and Argonne networking staff resulted in diagnosis and repair of a subtle network failure just 20 minutes before the demonstration.

"Demonstrations like this provide a glimpse into the future of how science will be done across DOE facilities, while at the same time stress testing the infrastructure we have in place today," said Michael E. Papka, deputy associate laboratory director and director of the ALCF.

Joe Mambretti, director of StarLight and the International Center for Advanced Internet Research at Northwestern, agrees. ?"The innovative techniques shown throughout this demonstration can not only be applied to light source investigations, they can be more broadly applied to many types of science workflows requiring real-time, data-intensive streaming from source to computational resources to visualization."