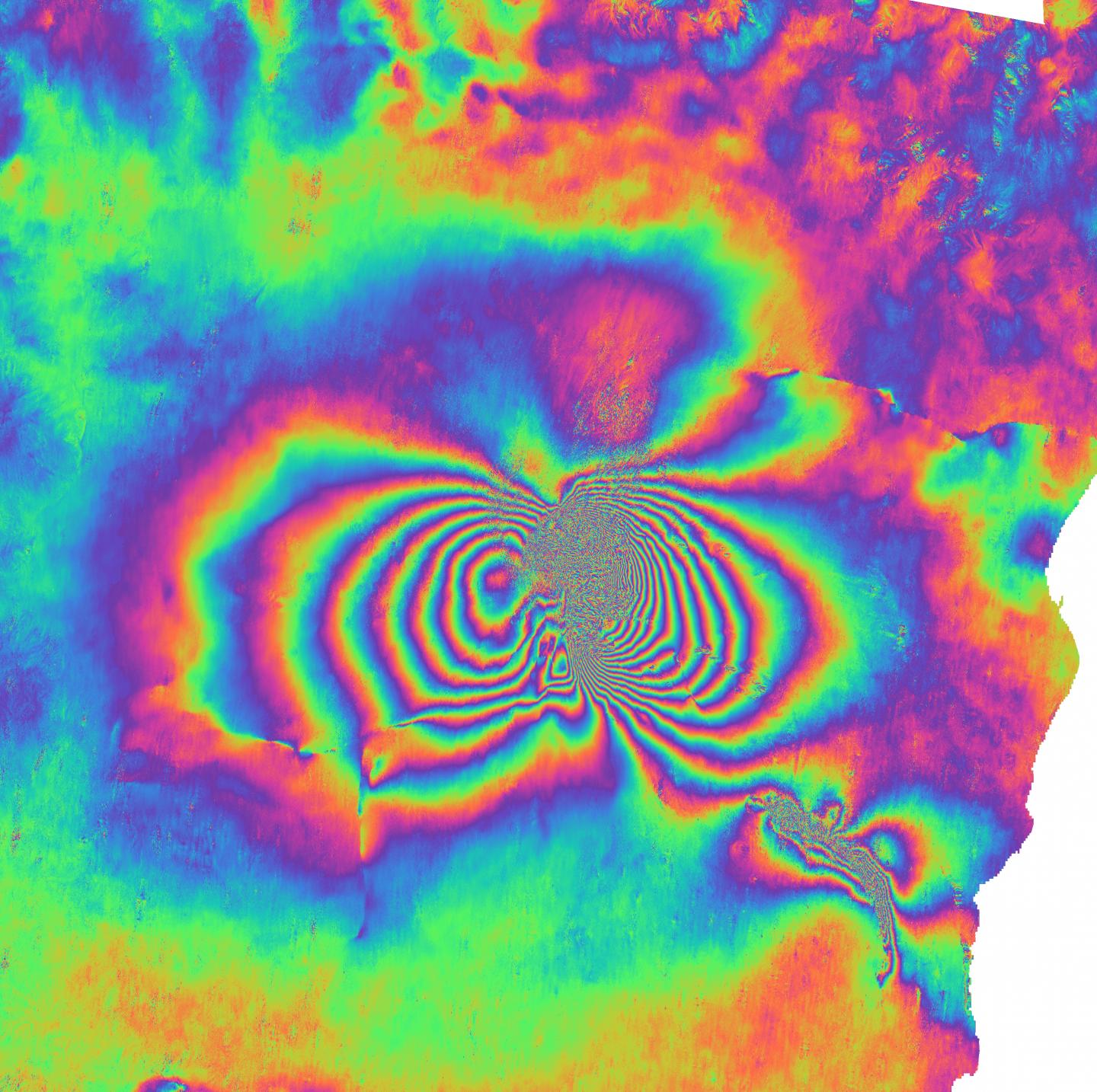 This is an interferogram of the December 2018 eruption of Etna in southern Italy, based on Sentinel-1 satellite images. Interferograms spatially map ground surface movements.

More than half of the world's active volcanoes are not monitored instrumentally. Hence, even eruptions that could potentially have rung an alarm can occur without people at risk having a clue of the upcoming disaster. As a first and early step towards a volcano early warning system, a research project headed by Sébastien Valade from the Technical University of Berlin (TU Berlin) and the GFZ German Research Centre for Geosciences in Potsdam led to a new volcano monitoring platform which analyses satellite images using - amongst other methods - "artificial intelligence" (AI). Through tests with data from recent events, Valade and his colleagues demonstrated that their platform called MOUNTS (Monitoring Unrest from Space) can integrate multiple sets of diverse types of data for a comprehensive monitoring of volcanoes. The team's results were published in the journal Remote Sensing.

Of the 1500 active volcanoes worldwide, up to 85 erupt each year. Due to the cost and difficulty to maintain instrumentation in volcanic environments, less than half of the active volcanoes are monitored with ground-based sensors, and even less are considered well-monitored. Volcanoes considered dormant or extinct are commonly not instrumentally monitored at all, but may experience large and unexpected eruptions, as was the case for the Chaitén volcano in Chile in 2008 which erupted after 8000 years of inactivity.

Satellites can provide crucial data when ground-based monitoring is limited or lacking completely. Continuous long-term observations from space are key to better recognizing signs of volcanic unrest. Eruptions are often - but not always - preceded by precursory signals which may last a few hours to a few years. These signals can include changes in the seismic behaviour, ground deformation, gas emissions, temperature increase or several of the above.

"Apart from seismicity, all of these can be monitored from space by exploiting various wavelengths across the electromagnetic spectrum", says Sébastien Valade, leader of the MOUNT project. It is funded by GEO.X, a research network for geosciences in Berlin and Potsdam founded in 2010, and conducted at TU Berlin and GFZ. "With the MOUNTS monitoring system, we exploit multiple satellite sensors in order to detect and quantify changes around volcanoes", he adds. "And we also integrated seismic data from GFZ's worldwide GEOFON network and from the United States Geological Survey USGS."

Part of the project was to test whether AI algorithms could be successfully integrated in the data analysis procedure. These algorithms were mainly developed by Andreas Ley from the TU Berlin. He applied so-called artificial neural networks to automatically detect large deformation events. The researchers trained them with computer-generated images mimicking real satellite images. From this vast number of synthetic examples, the software learned to detect large deformation events in real satellite data formerly not known to it. This field of data science is called 'machine learning'.

„For us, this was an important 'test balloon' to see how we can integrate machine learning into the system," says Andreas Ley. "Right now, our deformation detector just solves a single task. But our vision is to integrate several AI tools for different tasks. Since these tools usually benefit from being trained on large amounts of data, we want to make them learn continuously from all the data the system gathers on a global scale."

The main challenges he and his co-authors had to deal with were handling the large amounts of data, and software engineering issues. "But these problems can be solved", says Sébastien Valade. "I am deeply convinced that in the not so far future, automated monitoring systems using AI and data from different sources like satellite remote sensing and ground-based sensors will help to warn people in a more timely and robust fashion."

Already today, the analysis provided by the MOUNTS monitoring platform allows for a comprehensive understanding of various processes in different climatic and volcanic settings across the globe: from the propagation of magma beneath the surface to the emplacement of volcanic material during the eruption, as well as the morphological changes of affected areas, and the emission of gases into the atmosphere. The researchers successfully tested MOUNTS on a number of recent events like the Krakatau eruption in Indonesia in 2018 or eruptions in Hawaii and Guatemala, to name a few.

The system currently monitors 17 volcanoes worldwide including the Popocatépetl in Mexico and Etna in Italy. The website of the platform is freely accessible, and - thanks to the global coverage and free access to the underlying data - can easily incorporate new data.