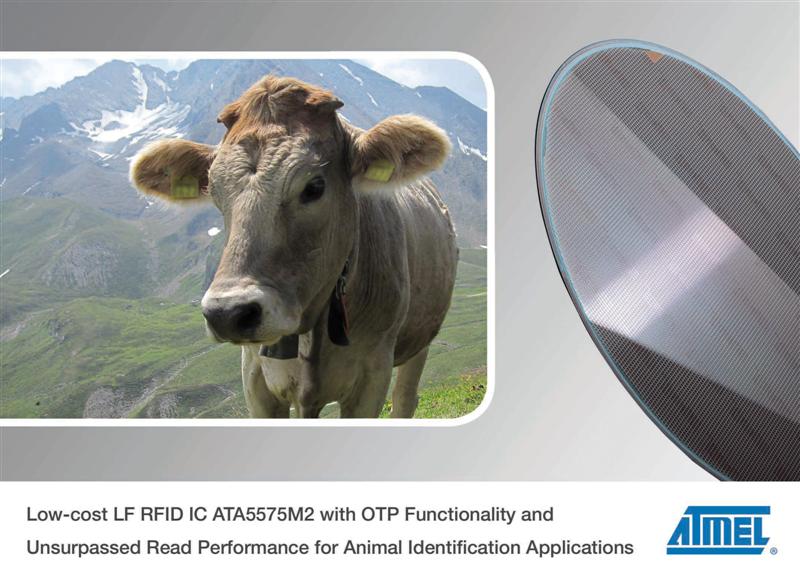 Atmel® Corporation (NASDAQ: ATML) today announced the availability of a low-frequency (LF) one-time programmable (OTP) transponder IC, the Atmel IDIC® ATA5575M2, optimized for next-generation animal identification systems for pets, wildlife or livestock. Extending the broad and well-known Atmel RFID family, the new device can also be used for waste management applications according to the BDE standard. The Atmel ATA5575M2 OTP functionality simplifies the production process and allows for increased flexibility compared to read-only devices. Before shipping, customers can program into the device any necessary information, including the specific country or the manufacturer code supplied either by the International Committee for Animal Recording (ICAR) or government authorities. This reduces lead-time and time to market down to approximately 1 to 2 weeks. The device architecture enables better read distances with different coils and readers. The write distance is reduced as one-time programming is required, which usually takes place in close coupling to the programming device during the final tag test and customization. Large write distances are typically unfavorable due to the risks involved with multiple tag programming. These improvements help minimize both cost and chip size. Additionally, the integration of optional trimmed 250-pF or 330-pF on-chip capacitors reduces system cost. These capacitors eliminate the need for external components because a coil is all that is needed for a complete system, thus enabling extra-small access control applications. At approximately 0.9 square millimeters, the Atmel ATA5575M2 can be used in most transponder packages, including glass transponders or plastic key housings for very small tags (such as animal tags). The memory in the device contains a unique manufacturer-programmed ID which the user can overwrite with a specific animal ID code. The user ID (UID) can be read and archived (along with the animal code) before programming to ensure reliable traceability. Since an LF device operates in the range of 100kHz to 150kHz, the Atmel ATA5575M2 can be used worldwide. It is designed for rugged environments and can also be used in conditions not typical for RFID application devices, including underwater (fish tagging), in dirt (outdoor livestock), or injected via glass or plastic transponders (under the skin of animals) for tracking purposes. The ATA5575M2 transponder IC supports the FDX-B and FDX-A standards:

Availability and Pricing Samples are available now on wafer or die-in-waffle pack. Pricing for wafer shipments of the Atmel ATA5575M2 starts at US $0.34 in quantities of 15,000. To support the engineer and to simplify the design of complete RFID systems, Atmel provides an evaluation kit (ATA2270-EK1) with ATA5575M2 sample tags. This kit is based on Atmel's well-known AVR® microcontrollers and is accompanied by Windows® PC software, C-source code for the AVR and PCB Gerber data for the reader board. www.atmel.com