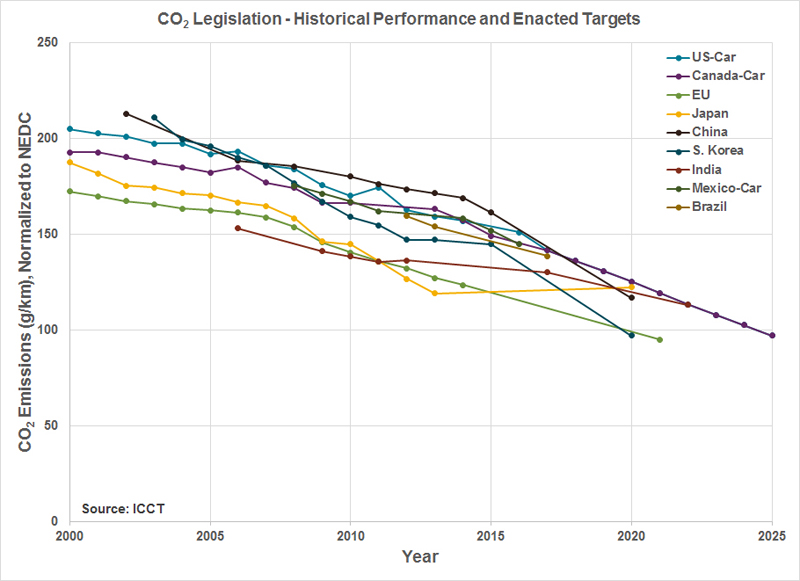 Worldwide automakers have begun releasing vehicles with a new 48-volt (48V) power subsystem, also known as board net. The first announcements came from European OEMs, like Audi, who announced a 48V system with its SQ7 TDI model. The Audi 48V system powers an electric compressor that eliminates turbo lag and an electromechanical active roll stabilization system that improves ride and handling. The 48V initiative has now gone global. Chinese OEMs including Geely and FAW Group announced they will launch 48V mild hybrids in the coming years, and Italian-American OEM Fiat Chrysler has made a similar announcement. Korean OEMs Hyundai and SsangYong have also demonstrated 48V mild hybrids.

48V subsystems do introduce an incremental vehicle cost, but the widespread acceptance shows that automakers acknowledge it as a means to achieve lower CO2 emissions, improved fuel economy, and vehicle drivability enhancements. Regulatory CO2 emissions and fuel economy requirements are driving the adoption of 48V mild hybrid systems. The penalties are severe for OEMs that do not meet these legislated targets. Figure 1 demonstrates the CO2 emission limits enacted worldwide. In the U.S., Europe, China, and Korea, automakers will need to achieve a 22-36% CO2 emissions reduction in their fleets over the next 10 years to comply with the current legislation.

Figure 2 shows the fuel economy targets. In order to meet these targets, automakers must improve fuel economy by 24-49% over the same 10-year time period. While the regulations are getting tighter, there is a further push worldwide to make the testing cycles more representative of real-world driving conditions. As test methodologies improve, it is expected that automakers will find it even more difficult to meet the regulation targets.

In light of the increasingly stringent regulations and higher penalties for non-compliance, vehicle manufacturers are highly motivated to develop technologies that will help them reduce CO2 emissions and improve fuel economy. Not surprisingly, they are rapidly adopting 48V mild hybrid systems because they reduce emissions by 10-15% in small vehicles and 15-20% in larger models, and at a relatively low incremental cost.

Inside the 48V System

The 48V system typically consists of several core elements as shown in Figure 3. There is a 48V battery, a 48V starter/generator, and a 12-48V DC-to-DC converter. Typically, a 48V Lithium-ion (Li-ion) battery provides the energy storage for this board net. Li-ion is the battery technology of choice because of its high-energy stored-to-weight ratio (energy density) and its ability to accept energy quickly, enabling efficient regenerative braking systems. The 48V starter/generator replaces both the 12V alternator and 12V starter. It starts the engine and then acts as a dynamo, translating the combustion engine’s rotational energy into electrical power. During braking periods, the vehicle’s kinetic energy turns the dynamo and typically produces 12-15kW of power, while slowing the vehicle. Depending on the way the starter/generator is integrated into the powertrain, it may also be capable of providing a boost or torque assist during periods of acceleration. Finally, a 12V/48V bidirectional DC/DC converter is used to link the existing 12V board net to the new 48V board net. The 12V/48V DC/DC typically supplies power up to 3.5kW from the 48V system to the 12V net to power the existing vehicle electronics. In some situations, the 12V board net must supply the 48V electronics through the 12V/48V DC/DC as well, therefore requiring bidirectional power transfer. Beyond these three common elements of the 48V subsystem, other components that can be added include an electric compressor, electromechanical roll stabilization, electric screen clear, and various motors to support functions such as water pumps and cooling fans. 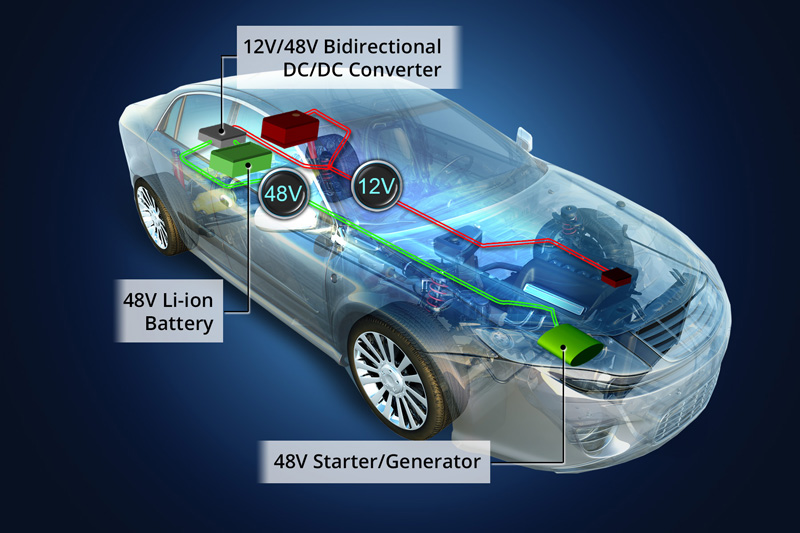 Figure 3. Key components of the 48V board net

As previously stated, one of the principal benefits that automakers can realize with the addition of the 48V board net is a reduction in CO2 emissions and improved fuel economy. Contributing factors include the addition of the 48V starter/generator, which significantly improves the start-stop system over the standard 12V implementation. The 48V starter reduces engine start time to just a couple hundred milliseconds from as much as 1 to 2 seconds in the traditional 12V system. This allows the engine to stop in cases where the need for quick acceleration or immediate restart would have required the 12V start-stop system to leave the engine running. The added capacity of the 48V battery also allows the engine to be stopped for longer durations while still maintaining functions such as climate control and infotainment. In addition, the 48V starter can provide a boost or torque assist that reduces load on the combustion engine to improve efficiency under acceleration. The 12-15kW starter/generator is able to capture more of the kinetic energy of the vehicle during braking than is possible with a typical 2kW alternator and the Li-ion battery is better able to quickly store the recovered energy, significantly improving the effectiveness of regenerative braking.

Automakers also realize another significant improvement, without affecting vehicle drivability, by downsizing the combustion engine and adding a 48V supercharger to provide additional power boost for better acceleration. Standard 12V turbo-charged vehicles also make use of engine downsizing to improve efficiency, but the turbo-lag associated with a mechanically driven system and the lack of available boost at low engine RPMs results in a less than satisfactory driving experience. Using a 48V supercharge provides near instantaneous boost at any engine RPM, eliminating the negative impact on drivability. And there are additional benefits from weight reduction when 12V systems are converted to 48V. Typically, the wiring harness supplying power can achieve a 4x reduction in current required to supply the same power, and motors running off 48V are significantly lighter than with the traditional 12V system. There is a small negative impact due to the added weight of the new 48V systems (where they do not replace an existing 12V device); however, this impact does not diminish the overall improvements.

While the 48V system will reduce CO2 emissions and improve fuel economy, automakers are also banking that consumers will value the improvements in drivability it offers. Audi has demonstrated that when using a 48V electric compressor, they are able to increase off-the-line acceleration. The electric compressor spins up to 70,000 RPM in 250ms, providing torque-boost almost instantaneously, even at low engine rpms. With a 48V starter-generator, the engine starts in less time and with less vibration than with a conventional 12V starter. A start-stop system using 48V also addresses the perception that these systems are irritating and don’t allow the driver to make necessary split-second decisions, such as entering into high-speed traffic.

The only additional component required for a 12V/48V power-supply system is a relatively high power, up to 3.5kW, bidirectional DC/DC converter (as shown in Figure 4) to provide a bridge between the 48V and 12V systems. Previously DC/DC converters were designed for operation in only one direction and were limited to a few hundred watts or less which posed a major challenge. Fortunately, Intersil’s new controller is designed to provide bidirectional dc-to-dc conversion between the 12 and 48V board nets and is scalable for supplying power from under 1kW to over 3.5kW. 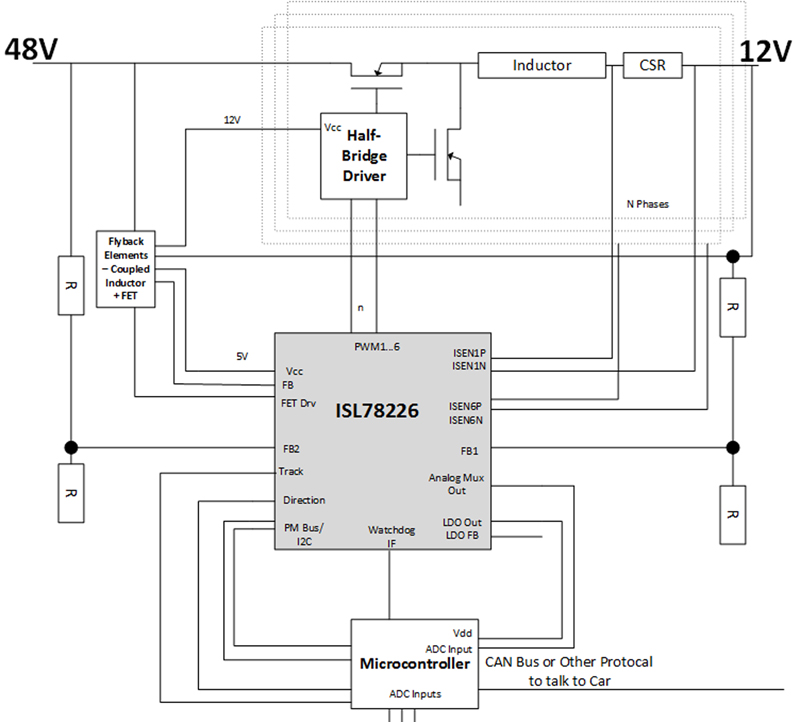 The ISL78226 is a 6-phase 12V/48V bidirectional synchronous PWM controller developed to solve the challenges associated with implementing a high power bidirectional bridge between the 12V and 48V power systems. To support this new requirement, automotive tier 1s initially had to build a system from existing devices intended for other applications. One way was to use a DSP to implement digital power algorithms that could be used to drive a multiphase half-bridge power conversion stage. This approach was flexible, but required in-depth knowledge of control theory and implied extensive, long-term support of the firmware. Another approach was to combine two unidirectional controllers with multiplexers and a microcontroller to activate the appropriate paths. This approach required redundant components that resulted in a large and complex final solution.

The ISL78226 is a single analog controller that performs bidirectional DC/DC power conversion, eliminating the downsides of alternative methods. It can control up to 6-phases and automatically change the number of active phases to adapt to the load demanded by the output, thereby maximizing the DC/DC conversion efficiency. A single IC typically supports power conversion up to 3.75kW, but multiple ISL78226 ICs can be combined to manage more phases for higher power systems. When used in parallel to make higher power conversions, the ICs coordinate phase-to-phase current balancing and fault response. The controller regulates the output voltage (either 12V in buck mode or 48V in boost mode) and it includes a simple track interface to allow the output voltage to be adjusted via a digital PWM signal or analog reference. And while it is regulating the output voltage, the device actively balances the average current flowing in each power stage phase. This helps equalize losses and prevents hot spots from developing in one of the phases that might otherwise occur when components such as inductors are mismatched.

Additionally, the ISL78226 regulates the maximum average current to limit the power transferred in either direction. This protects the DC/DC converter as well as the vehicle’s entire power net. It also allows for constant current charging in applications where either the 12V battery or the 48V battery is connected directly to the output. The controller includes a PMBus digital interface that provides system control and diagnostics, enabling functional safety goals to be achieved with sufficient fault coverage. It also allows the system to take preventative action when conditions exceed warning thresholds, and in the event of a serious fault or failure, the controller can be configured to allow the vehicle to limp-home.

Automotive OEMs are fully embracing the 48V power subsystem and have signaled their intentions with new car model developments underway. Several automakers have already publically announced 48V mild hybrid vehicles. The impetus for adding another power bus is to improve fuel economy and reduce CO2 emissions through mild hybridization, while at the same time augmenting the drivability of the vehicle. The 48V board net achieves all of the automakers goals at a cost point that has more potential to reach wide-scale adoption than attained by full hybridization.