Automobile lighting in the face of things to come

Demands on automotive lighting have increased in the last decades 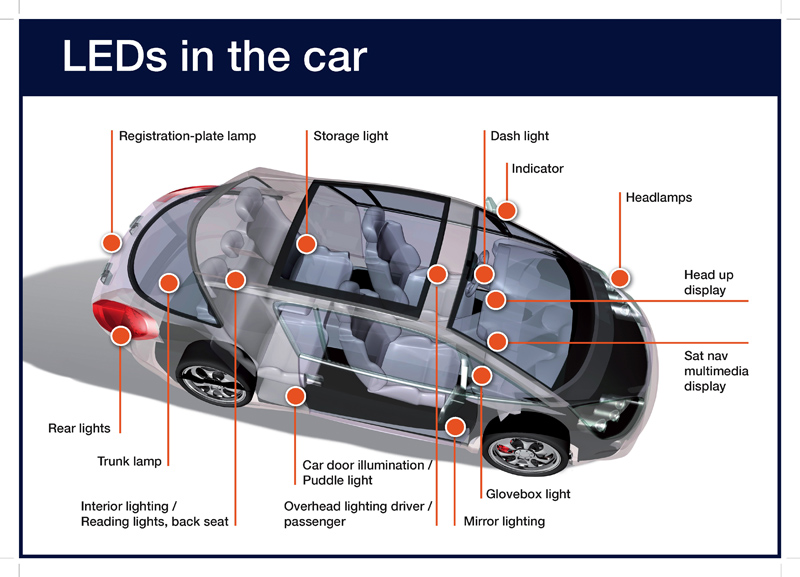 Going from lanterns to LEDs, in a nutshell, describes the course of development in automotive lighting since cars first came on the scene 100 years ago. What originally served only a functional purpose has long since evolved into a matter of design. For example, every vehicle can be given an individual appearance, thanks to its characteristic lighting. In this light, LED compact light diodes open up a world of new possibilities. In the early days of the automobile, the aesthetics of illumination still played a subordinate role. Lights have dominated a car's since they were lanterns placed on the outside of the vehicle. As early as 1925, during the era of light bulbs, Osram made a significant contribution to automotive lighting: Bilux double-filament lamps, which were the first lamps to use only one lighting source for both dimmed light and head beams, thus improving lighting conditions. Since the 1970s, halogen car lamps have become established as the standard, and to this very day they are built into approximately 90 percent of all vehicles. However, with this source of lighting being used, it is very difficult to realize a unique design. Headlamps with glow-discharge lamps - so-called Xenon lamps - entered the market in the 1990s. The color temperature is similar to that of daylight. This is what makes the Xenon light appear whiter and thus enables better sight, especially in bad weather. What is more, the „high-tech" look of the lights adds to the design of the vehicle. Therefore, Xenon lights are offered as optional original equipment in more and more cars, contributing significantly to their look. LED: characteristic at first sight Nevertheless, three little letters will change the future face of automobiles: LED. They combine the practical aspects of the car's design with aesthetic factors in all respects. The compact light diodes, which originally merely served as substitutes for the very small light bulbs in vehicle cockpits, are presently conquering the entire spectrum of automotive lighting. Their greatest benefit: they require only little space and can be arranged in virtually any imaginable way. Hence, not only can they be used as singular, point-shaped light sources, but also as solid lighting strips or illuminating surfaces. They combine a variety of different functions, such as dimmed lights and indicators, within one single luminaire and provide space for even more functions - for instance a night vision device. The manufacturer-specific definition of function and configuration ensures a striking design, also at night. (See Figure 1.) 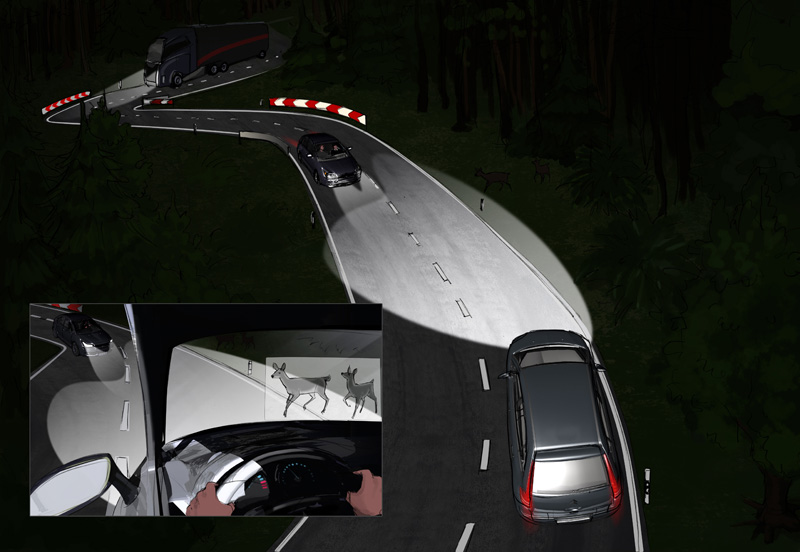 When used as rear or front lighting, LEDs succeed in giving modern vehicles a "facial" appearance with a clear recognition value. In the new BMW models for instance, the characteristic lighting rings have been replaced by light diodes. In the latest Audi A8 and CLS-Coupé by Mercedes-Benz, for instance, LEDs for the first time combine all headlamp functions: dimmed lights as well as high beams, motorway lights, curve lighting and all-weather lighting are all realized with the light diodes in the Osram Ostar Headlamp Product platform by Osram Opto Semiconductors. Lighting strips, lighting points or surfaces create an appearance entirely different from the round headlamp bulbs formerly used, which clearly distinguishes the vehicle from other cars. In this regard, the possibilities for designing are boundless - with LED technology the front lighting is no longer restricted to one headlamp located on each side. Instead, it is also possible to integrate solid strips of light, or to apply lighting surfaces vertically or arched around the mudguard. (See Figure 2.) 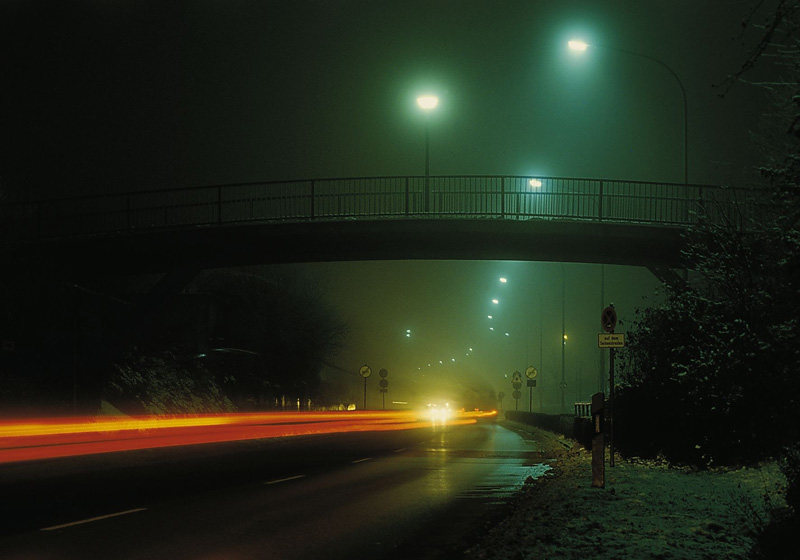 Safety and Design By now, LED vehicle front lighting has left the niche market of small series and luxury vehicles and is successfully established within large scale production. Following up on the success of daytime headlights, LED headlamps, too, are now conquering the middle class market. With a market leader like Osram Opto Semiconductors, which provides a vast product range, illuminating visions can now become reality. Yet LEDs do not only win over manufacturers of automobiles with regard to design or lighting quality. The fundamental advantages of LED, such as their long durability (up to a maximum of 50,000 hours) and their robustness, as well as their defined lighting radiation characteristics, set new standards. As is the case with Xenon lights, LEDs also generate a light similar to that of daylight, which increases contrast sensitivity. Especially in the peripheral field of vision, where passers-by, animals or poorly lit vehicles can suddenly appear out of nowhere, these objects are noticed better thanks to the white LED light. An additional benefit: because the color temperature is so close to that of sunlight, drivers' eyes do not tire as quickly. At the end of the day, this technology has the potential of preventing numerous accidents that may happen at night. Universal application The "face" of a vehicle is its most distinctive feature - but manufacturers also use LEDs for rear lights or the interior of a vehicle in order to distinguish their cars from other designers'. For instance, in the interior of the vehicle LEDs can be applied as mood lights in the roof lining or foot-well area. The range varies from manufacturer-specific colors, which also create a unique ambience in the interior of the vehicle, right up to individually customized colors. The drivers can enjoy their individual interior for as long as they have their vehicle. After all, the lifespan of high-quality LEDs exceeds that of the vehicle. What is more, with LED technology, a variety of different lighting profiles can be configured in accordance with specific driving situations: the light of the vehicle's interior adapts to the light of the streets in town, thus becoming lighter, while on an unlit motorway the lighting is reduced - either by decreasing the number of LEDs in use or by a dimming function. The latter is operated by brightness sensors, the respective speed, or manually. (See Figure 3.) Illuminated radiator grille as a vision of the future The launch of new vehicles, such as electrically powered cars, will become another milestone in automobile design. The design idiom, which is adapted in accordance with alternative modes of driving, will have a significant impact on the design of both the interior and exterior lighting of vehicles and increase the call for distinctiveness. Developers have already tested this when designing radiator grilles: when the battery is being charged, the front of the car might be lit up in blue, or the current mode of the vehicle might be indicated by the light behind the lamellae. In any case, LEDs will be indispensable for the future of automotive lighting. Osram