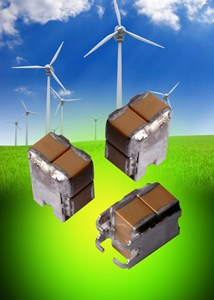 AVX, a leading manufacturer of passive components and interconnect solutions, has expanded its Mini-TurboCap(TM) and RoHS Compliant Mini-TurboCap Series with a new 25V rating and an extended capacitance range (up to 39µF) for its 50V parts. Now available in 25V, 50V, and 100V, these state-of-the-art base metal electrode (BME) capacitor series exhibit extremely high volumetric efficiency (CV) in addition to ultra low ESR and ESL in a compact footprint. Capable of conserving considerable amounts of critical board space, both Mini-TurboCap Series are ideal for I/O EMI filtering in military and COTS+ switch mode power supply applications, industrial power converters, radar systems, and aerospace power electronics, among several others.

"The extended voltage and capacitance ratings for our Mini-TurboCap Series BME capacitors are especially beneficial developments for design engineers working in a variety of critical markets, as there are no other capacitors on the market that can match their high CV capabilities in a similarly small footprint," said Pat Hollenbeck, applications engineer at AVX.

Both comprised of X7R dielectric materials, the Mini-TurboCap and RoHS Compliant Mini-TurboCap Series feature an operating temperature range of -55 degrees C to +125 degrees C. Capacitance values for the series' 25V parts extend up to 82µF; for 50V parts, values extend to 39µF, and for 100V parts they extend to 8.2µF. The two series have also been life tested to 1,000 hours at 150% of the rated voltage and +125 degrees C.

Both Mini-TurboCap Series feature stress-relieving lead frames to ensure the effective mechanical decoupling of the chips from the board and mitigate the stress created by board flexing, vibration, and temperature cycling. Mini-TurboCap Series capacitors and their RoHS compliant counterparts also feature 4-pin DIP construction.