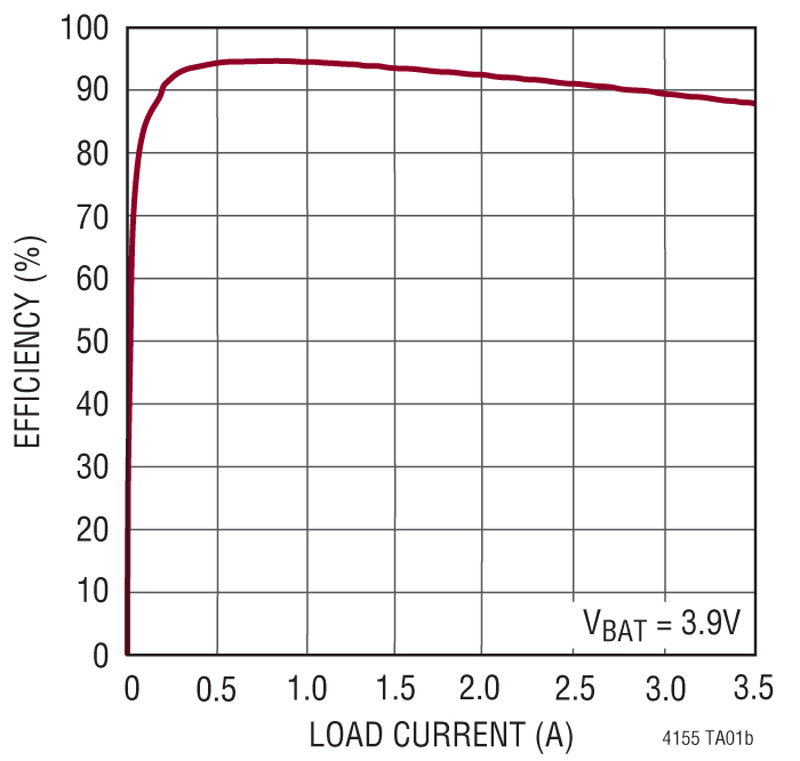 The first trend requires increased battery capacities. Unfortunately, users are often impatient and charge systems must recharge these increased capacities in a reasonable time, which leads to increased charge currents. The second trend requires tremendous flexibility from the battery charging system. More Power Consider modern handheld devicesâ€"both consumer and industrial devices may include a cellular-phone modem, a WiFi module, a Bluetooth module, a large back-lit display, and more. The power architecture of many handheld devices mirrors that of a cell phone. Typically, a 3.7 V Li-ion battery serves as the primary power source due to its high gravimetric (Wh/kg) and volumetric (Wh/m3) energy density. In the past, many high-powered devices used a 7.4 V lithium-ion battery to reduce current requirements, but the availability of inexpensive 5 V power management ICs has pushed more and more handhelds to the lower voltage architecture. The tablet computer illustrates this point well: A typical tablet computer provides significant functionality with a very large screen (for a portable device). When a 3.7 V battery powers such a device, engineers must measure battery capacity in Ampere-hours, not milliamp-hours. In order to charge such a battery in just a few hours, Amperes of charge current are necessary as well. However, this high charge current does not prevent consumers from also wanting to charge their high-powered devices from a USB port if a high current wall adapter is not available. To satisfy these requirements, a battery charger must be able to charge at a high current (>2 A) when a wall adapter is available, but still efficiently make use of the 2.5 to 4.5 W available from USB. Furthermore, the product needs to protect sensitive downstream low-voltage components from potentially damaging overvoltage events and seamlessly direct high currents to the load from a USB input, a wall adapter, or the battery while minimizing power loss. Simultaneously, the charge-control IC must safely manage the battery-charging algorithm and monitor critical system parameters.

Charging single-cell portables An example of a lithium-ion battery-charge control IC with these traits is the LTC4155. This high-power, I2C controlled charger efficiently transfers up to 3 A from a variety of 5 V sources, resulting in over 3.5 A available for battery charging and system use. Even at these high current levels, the LTC4155's 88 to 94% efficiency eases thermal-budgeting constraints (Figure 1). The LTC4155's switching topology seamlessly manages power distribution from two input sources such as a wall adapter and USB port to the application's rechargeable lithium-ion battery while preferentially providing power to the system load when input power is limited. The LTC4155's switching regulator acts like a transformer, allowing the load current on VOUT to exceed the current drawn by the input supply, and making greatly improved use of the available power for battery charging compared to typical linear-mode chargers. Unlike ordinary switching battery chargers, the LTC4155 features instant-on operation to ensure system power is available at plug-in even with a dead or deeply discharged battery. 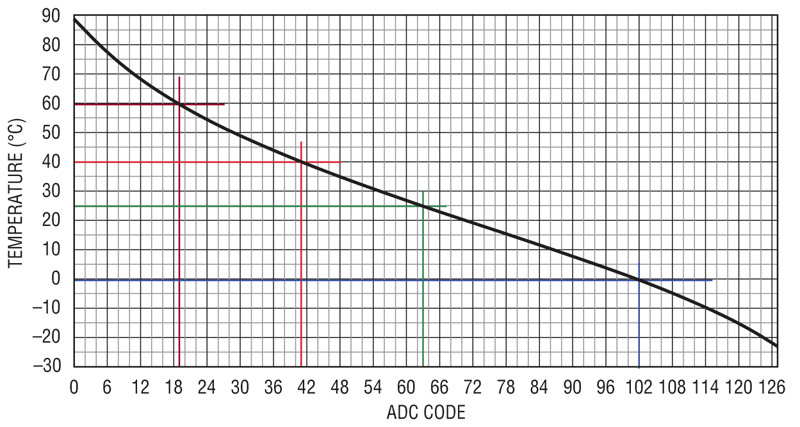 While charging a battery at a high rate, it is important to monitor battery safety. The LTC4155 will automatically stop charging when the battery temperature falls below 0Â°C or rises above 40Â°C as measured by an external NTC (negative temperature coefficient) thermistor. In addition to this autonomous feature, the LTC4155 provides a 7-bit expanded scale ADC to monitor the battery temperature with approximately 1Â°C resolution (Figure 2). Combined with four available float-voltage settings and fifteen battery charge-current settings, designers can use this ADC to create custom charge algorithms based on battery temperature. A simple 2-wire I2C port provides access to the NTC ADC results, enabling adjustment of the charge current and voltage settings. The I2C port also provides USB compliance by controlling 16 input current-limit settings including USB 2.0 and 3.0 compatible settings. The communication bus allows the LTC4155 to indicate additional status information such as input-supply status, charger status, and fault status. USB On-The-Go support provides a 5-V supply back to the USB port without any additional components. The LTC4155's dual input priority multiplexer autonomously selects the most appropriate inputâ€"wall adapter or USBâ€"based on a user-defined priority. The default priority goes to the adapter input. An OVP (overvoltage protection) circuit simultaneously protects both inputs from damage caused by accidental application of high voltage or reverse voltage. The LTC4155's multiplexing capability guarantees that ample power is always available to VOUT even if input power is insufficient or absent. Managing two inputs is sufficient for many portable applications such as tablet computers or bar-code scanners. However, designers of portable devices continue to seek ways to charge the battery from any available power source. Multiple Input Sources There are several reasons for users to charge batteries from multiple input sources. Some applications may need to be untethered from the grid and look to solar panels to provide power. Other applications demand the convenience of being able to charge from a wall adapter or an automotive battery or a high-voltage industrial or telecom supply. Whatever the reason, the requirement places a significant burden on the battery charging system. Most battery chargers make use of a step-down architecture to charge a battery from a voltage supply higher than the maximum battery voltage. Prior charger products have typically been limited to input voltages of about 30 V. These limitations prevent a designer from considering a telecom supply as a viable input supply or a solar panel with a 42 V open-circuit voltage. In some cases the voltage range of the desired input supplies varies both above and below the battery voltage. Designing a charger for these challenges typically involves a compilation of high-precision current-sense amplifiers, ADCs, a microprocessor to control charging, a high performance DC-DC converter, and a so-called ideal diode or multiplexing circuitry. Flexible charging Another example of charge controllers that accommodate multiple energy sources is the LTC4000, which converts any externally compensated DC-DC power supply into a full- featured battery charger. Typical DC-DC converter topologies that the LTC4000 can driveinclude, but are not limited to, buck, boost, buck-boost, Sepic, and flyback. The device offers precision input and charge-current regulation and operates across a wide input- and output-voltage range of 3 V to 60 V, allowing compatibility with a variety of different input-voltage sources, battery-stack sizes, and chemistries. Typical applications are widespread due to the device's general-purpose configuration and include high-power battery-charger systems, high-performance portable instruments, battery-backup systems, industrial battery-equipped devices, and notebook or subnotebook computers. 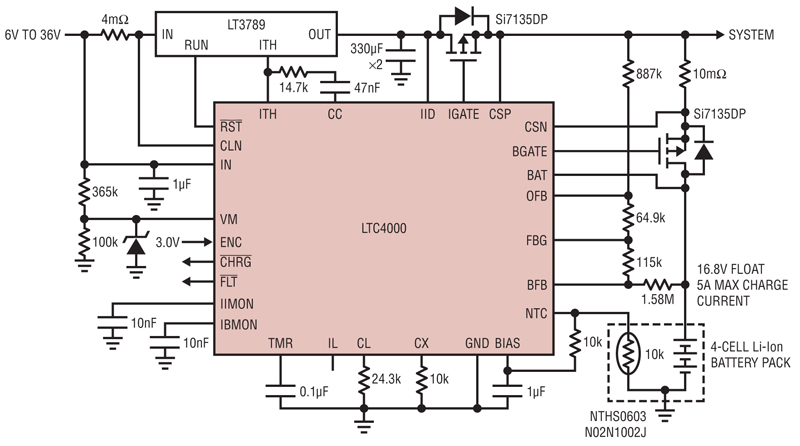 The LTC4000's high-voltage capability and its ability to operate with many different DC-DC topologies, allow it to form battery-charging circuits with virtually any input supply (Figure 3). To ensure that power from these inputs flows to the appropriate load, the LTC4000 features an intelligent topology that preferentially provides power to the system load when input power is limited. The LTC4000 controls external PFETs to provide low-loss reverse-current protection, low-loss battery charging and discharging, and instant-on operation to ensure system power is available at plug-in even with a dead or deeply discharged battery. External sense resistors provide input current and battery-charge current information, allowing the LTC4000 to work with converters that span the power range from mW to kW. The LTC4000's full-featured battery-charge controller charges a variety of battery chemistries including lithium-ion/polymer/phosphate, sealed lead acid, and nickel. The battery charger also includes precision current sensing that allows lower sense voltages for high-current applications. www.linear.com