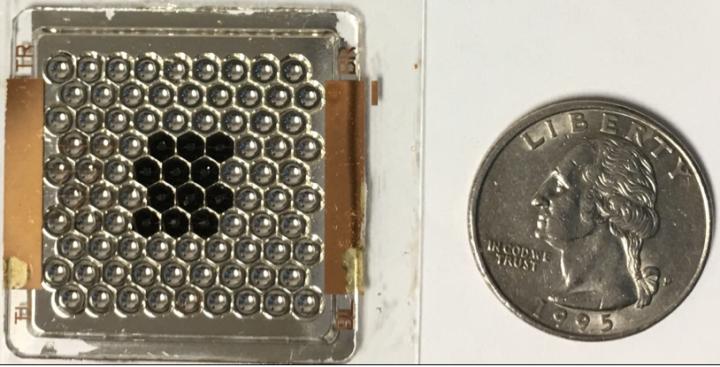 According to research published in Optics Express, the compact, microconcentrator photovoltaic system could provide unprecedented watt per kilogram of power critical to lowering costs for private space flight.

As the total costs of a launch are decreasing, solar power systems now represent a larger fraction than ever of total system cost. Optical concentration can improve the efficiency and reduce photovoltaic power costs, but has traditionally been too bulky, massive and unreliable for space use.

Together with U.S. colleagues, Prof. (Emer.) Jeffrey Gordon of the BGU Alexandre Yersin Department of Solar Energy and Environmental Physics, Jacob Blaustein Institutes for Desert Research, developed this first-generation prototype (1.7 mm wide) that is slightly thicker than a sheet of paper (.10 mm) and slightly larger than a U.S. quarter.

"These results lay the groundwork for future space microconcentrator photovoltaic systems and establish a realistic path to exceed 350 w/kg specific power at more than 33% power conversion efficiency by scaling down to even smaller microcells," the researchers say. "These could serve as a drop-in replacement for existing space solar cells at a substantially lower cost."

A second generation of more efficient solar cells now being fabricated at the U.S. Naval Research Labs is only 0.17 mm per side, 1.0 mm thick and will increase specific power even further. If successful, future arrays will be planned for private space initiatives, as well as space agencies pursuing new missions that require high power for electric propulsion and deep space missions, including to Jupiter and Saturn.