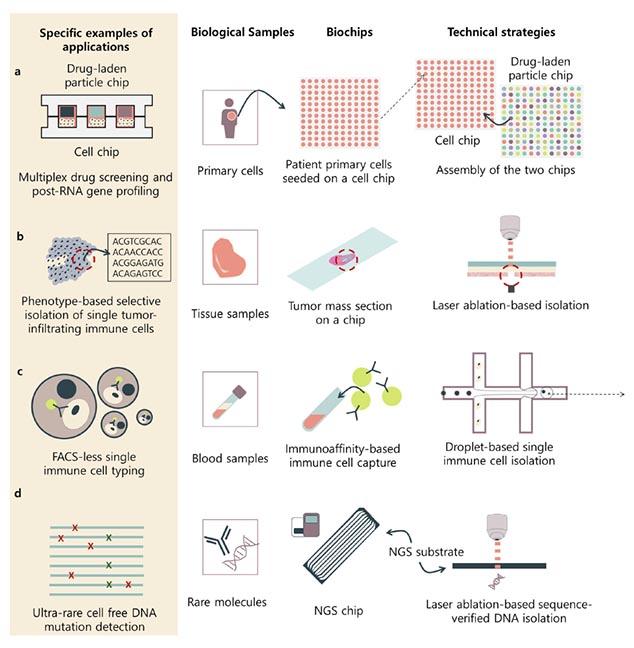 WASHINGTON, D.C. -- Biochips are essentially tiny laboratories designed to function inside living organisms, and they are driving next-generation DNA sequencing technologies. This powerful combination is capable of solving unique and important biological problems, such as single-cell, rare-cell or rare-molecule analysis, which next-generation sequencing can't do on its own.

Now that the scaling and throughput power of biochip technologies has emerged, the next trend in biochips will involve being capable of providing applications across a wide spectrum -- from identifying rare bacterium to population-based clinical studies.

In APL Bioengineering, from AIP Publishing, a group of researchers from Seoul National University explore the role advancements in biochip technology are playing in driving groundbreaking scientific discoveries and breakthroughs in medicine via next-generation sequencing, aka high-throughput sequencing.

"There have been many experimental successes and failures within the biochip field, and one of the most important things we point out in our review is that these were not done in vain," said Amos Chungwon Lee, lead author and a graduate student in Sunghoon Kwon's Biophotonics and Nano Engineering Laboratory. "These technologies are now moving forward and being applied in real-world settings."

One example of real-world use is biochips that isolate single cells from a heterogeneous mix of a complex biological mass -- they are enabling preprocessing for massively parallel $1 single-cell analysis.

"When these biochips meet next-generation sequencing, the net value of both technologies will increase exponentially," Lee said. "If biochips that allow single-cell analysis prevailed for the last decade, there are many more biochips with different functions that will now innovate the bio field -- including drug-screening biochips."

In their paper, the researchers provide a review of current state-of-the-art biochip technologies, separated into two main categories: microfluidic- and micromanipulation-based methods.

In the future, biochips will become widely available to the public.