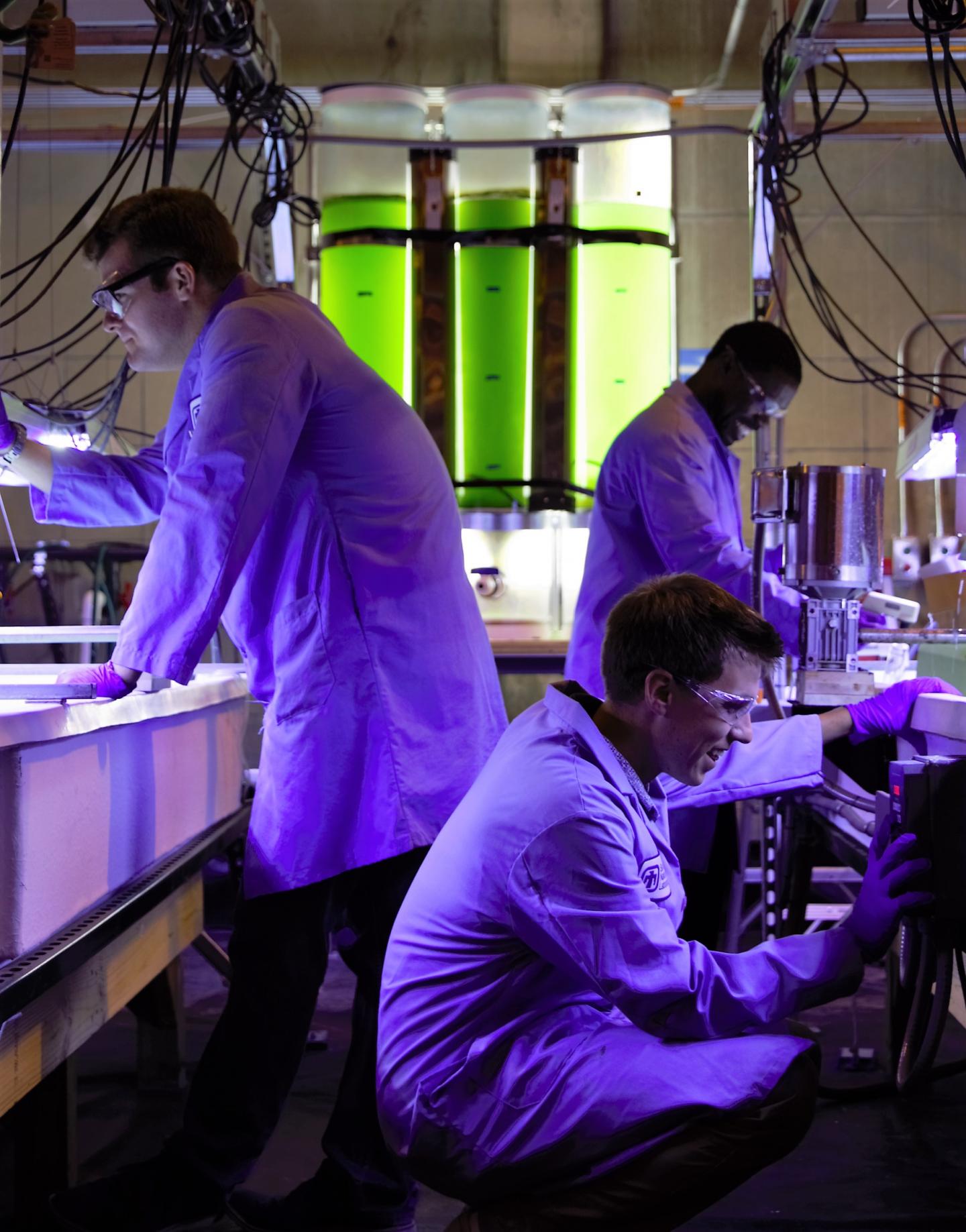 LIVERMORE, Calif.--You might not cook with this sugar, but from a biofuels standpoint, it's pretty sweet. A Bay Area company has patented a group of three single-celled, algae-like organisms that, when grown together, can produce high quantities of sugar just right for making biofuels. Sandia National Laboratories is helping HelioBioSys Inc. learn whether farming them on a large scale would be successful.

The demand for clean, domestically produced, renewable energy has resulted in a lot of research on algae. Algae is a desirable biofuel source because it doesn't compete with food crops for land, water or other resources. The water used to grow algae is not usually suitable for agriculture. Typically, algae farms aim to produce large quantities of biomass, so they can then be harvested and converted into fuels, chemicals or other bio-based products.

By contrast, HelioBioSys is working with organisms called cyanobacteria. Until the early 1900s, they were mistaken for algae. Like algae, colonies of cyanobacteria grow in water and have incorrectly been referred to as "blue-green algae." But unlike algae, these marine cyanobacteria excrete sugars directly into the water where they grow. A lot of it.

According to Sandia biochemist Ryan Davis, a typical algae operation might grow 1 gram of biomass per liter (0.04 ounces per quarter gallon). Small-scale testing on these cyanobacteria shows they can produce 4 to 7 grams of sugar per liter of biomass (up to 0.25 ounces per quarter gallon) -- an improvement in concentration of up to 700 percent. Therefore, growing cyanobacteria for sugars is more efficient than growing biomass.

Filtering sugar from water is a much simpler and therefore less expensive process than extracting lipids from large quantities of algae mass. Sugar is easy, compared to biomass, to convert into a wide variety of chemicals and fuels. Furthermore, cyanobacteria do not require additional fertilizer to make their sugars. These cost savings could make biofuels competitive with petroleum.

But first, this group of cyanobacteria's phenomenal sugar production needs to be better understood so it can be maximized. "In other words," Davis explains, "we're trying to deconstruct the magic sauce in this cyanobacteria consortium and learn what conditions are optimal for large-scale growth."

HelioBioSys founders Rocco Mancinelli and David Smernoff say they chose to grow a community of three cyanobacteria rather than focus on a single organism (which is common in algae cultivation) because communal systems more closely resemble nature. Mancinelli and Smernoff say cyanobacteria in communities are stronger and more likely to survive changes in the environment, contamination and predation. Sandia is helping them test this idea.

The cyanobacteria have already proved successful in closed, controlled, sterile laboratories. Sandia researchers are now growing the cyanobacteria in large raceway systems that resemble long bath tubs. Though the raceways are indoors they are open to the air, so predation could prove a much bigger challenge.

Davis explains, "Giant bowls of sugar water generally don't last long in nature." However, this is where Sandia's expertise in algae cultivation could be helpful, he said. "We can understand where we can prevent bacterial overload, and stop the sugars from being consumed by things we don't want to grow."

Unlike true algae, cyanobacteria have the remarkable ability to "fix" nitrogen from the atmosphere, which helps support their growth. This means cyanobacteria can literally pull their own fertilizer out of the air, eliminating the need for costly additional fertilizers.

Davis and his team are trying to understand whether each of the three cyanobacteria primarily performs a specific function for the consortium, such as fixing the nitrogen or producing most of the sugars. Even though the cyanobacteria require sunlight for growth, Davis thinks one of the cyanobacteria could be primarily responsible for acting like a sunscreen, protecting the group against light levels that get too high.

Sandia also is evaluating other attributes, such as micronutrient requirements or whether there are certain triggers for sugar production that could be controlled.

If the work at Sandia is successful, the next step is to test the cyanobacteria outdoors in larger ponds. After proving the technology outdoors, HelioBioSys hopes to license or sell the technology.

Despite their impressive history and mission, they say that without the Department of Energy's Small Business Vouchers program, getting cyanobacteria-based sugars to market would be unlikely. "Raising the funds for us to do the research that Sandia can do, with their equipment and facilities and expertise, would otherwise be impossible," Smernoff said. "So to have this program and let a small company like ours access those resources is invaluable."

As a result of the program, HelioBioSys has also partnered with Lawrence Berkeley National Laboratory. The laboratory has agreed to deploy their tangential flow filtration unit in Sandia's test beds. The unit is essentially a box with a porous membrane that only allows molecules of a certain size to pass through it. This will allow Sandia to quickly separate and extract sugars from the marine water.

Additionally, the Berkeley laboratory is studying the viability of these sugars for conversion to biofuels. In addition to biofuels, sugars produced by marine cyanobacteria have the potential to be used as the source material for a long list of products that are currently derived from petroleum. These include plastics, pharmaceuticals, fabrics, nylon, adhesives, shoe polish, asphalt, roof shingles and more.

As this project draws to a close by year's end, the country could be closer to a sweet future powered by the oldest of microorganisms.