Bioreactors on a Chip Renew Promises for Algal Biofuels 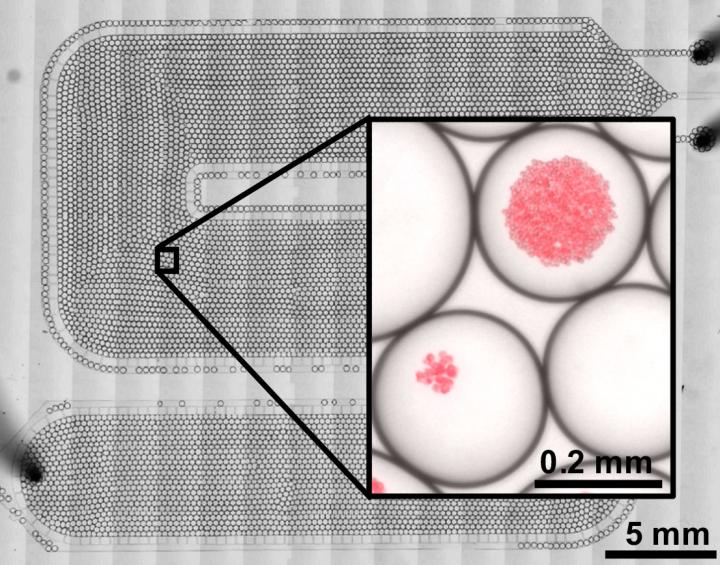 Colonies of algae inside droplets on a chip. Algal lipids stained red.

For over a decade, companies have promised a future of renewable fuel from algae. Investors interested in moving the world away from fossil fuel have contributed hundreds of millions of dollars to the effort, and with good reason. Algae replicate quickly, requiring little more than water and sunlight to accumulate to massive amounts, which then convert atmospheric CO2 into lipids (oils) that can be harvested and readily processed into biodiesel.

Despite high-profile demonstrations, promises have fallen short, and start-ups have revised business models to include production of specialty lipids, such as those used in cosmetics and soaps. Yet the dream of producing commercial-scale renewable energy persists, as new technologies emerge that might finally lead algal biofuels toward a competitive niche in the marketplace.

One of many improvements necessary for sustainable production of algal biofuel is the development of better algae. This week, researchers from Boyce Thompson Institute and Texas A&M University report in Plant Direct exciting new technology that may revolutionize the search for the perfect algal strain: Algal droplet bioreactors on a chip.

A single algal cell is captured in a tiny droplet of water encapsulated by oil - imagine the tiny droplets that form when you mix vegetable oil with water - then millions of algal droplets squeeze onto a chip about the size of a quarter. Each droplet is a micro-bioreactor, a highly-controlled environment in which algal cells can grow and replicate for several days, forming a genetically homogenous colony that goes through its typical biological reactions, including the production of lipids.

"This is the first microsystem that allows both lipid content analysis and growth rate measurement at high throughput, whereas previous work could only do one or the other," remarked senior author and engineer, Arum Han of Texas A&M University.

Scientists are racing to identify a super algal strain that can reproduce faster and produce more lipid per cell. This summer, ExxonMobil announced the discovery of a strain with a single genetic modification that allows for twice as much lipid production per cell. But this is only a step in the right direction, as thousands of genes hold potential for further improving both traits.

With today's gene-editing technologies, modifying algal genes can be relatively straightforward; however, identifying which genes to target is time-consuming and costly. Exposing an algal culture to a mutagen yields millions of unique, potentially improved algal cells that must each be tested for expression of a desired trait, such as increased lipid production. Mutated genes can then be identified through whole-genome sequencing.

"The important thing is to develop a tool that can screen millions of cells in a much shorter time frame and a smaller space. In a chip housing millions of droplets of cells, each droplet is like a flask or a bioreactor, and that's how we can get results faster from just a tiny chip," explained author and BTI post-doc, Shih-Chi Hsu.

The researchers first validated the chip system with algae known to grow faster or slower, or produce more or less lipid. They then screened 200,000 chemically mutated cells, identifying six mutants with both faster growth and higher lipid content. The screening, done on-chip, uses fluorescence detection of chlorophyll, representing total cell mass, and BODIPY, a fluorescent molecule that binds to lipids. All mutants with potential for improved growth or lipid production were recovered and verified off-chip.

While the results of this study are promising, 200,000 is still a low number of mutants compared to what is needed to find that super algal strain. "The most extraordinary variants will be found in one in a million, or ten million, so the throughput needs to be accelerated," explained senior biologist and BTI President, David Stern.

Excitingly, the tools for improving throughput are already in development, including larger chips that can screen millions of droplets in one experiment. "Such high-throughput technologies can rapidly accelerate the development process to obtain strains that are more efficient for use in biofuel production," Han remarked.

With the discovery and development of much more efficient algal strains, commercial-scale production of biofuel from algae may finally be a realistic promise.