In these high-precision test and measurement applications, generating system supplies that are bipolar and/or isolated poses a challenge to system designers in terms of board area, switching ripple, EMI, and efficiency. Data acquisition systems and digital multimeters require low noise supplies in order to deliver the performance of high resolution ADC signal chains without being corrupted by spurious ripple tones from switching supplies. Source measure units and dc sources/power supplies have similar requirements for minimizing spurious output ripple on high resolution DAC signal chains. There is also a trend toward a higher channel count in precision test and measurement instruments for increased parallel testing. In electrically isolated applications, these multichannel instruments have an increasing need for channel-to-channel isolation where power must be generated on a per channel basis. This is driving solutions that require a smaller and smaller PCB footprint while maintaining performance. Implementing low noise power solutions in these applications can result in larger than desired PCB footprints and/or poor power efficiency from excessive use of LDO regulators or filter circuits.

For example, a switching power supply rail with 5 mV of ripple at 1 MHz would need a combined power supply rejection ratio (PSRR) of 60 dB or greater from an LDO regulator and powered ADC to reduce the switching ripple seen at the ADC output to 5 μV or less. This would be a fraction of an LSB for a high resolution 18-bit ADC.

Luckily there are solutions that are simplifying this task through higher levels of power solution integration with μModule devices and components that deliver greater efficiencies while reducing radiated noise and switching ripple such as Silent Switcher devices and high power supply rejection ratio (PSRR) LDO regulators.

Many precision test and measurement instruments such as source measure units or power supplies require multiquadrant operation to source and measure both positive and negative signals. This requires the generation of both negative and positive supplies from a single positive supply input with low noise and in an efficient manner. Let’s consider a system that requires bipolar supply generation from a single positive input supply. Figure 1 shows power solutions that generate ±15 V and ±5 V and use positive and negative LDO regulators to filter/reduce the switching ripple as well as generate additional rails like 5 V, 3.3 V, or 1.8 V for powering signal conditioning circuitry or ADCs and DACs.

The LTM8049 and ADP5070/ADP5071 allow us to take a single positive input, boost it to the required positive supply, and invert it to generate the negative supply rail. The LTM8049 is a μModule solution that greatly simplifies the number of components needed to do this—we just need to add the input and output capacitors. As well as simplifying the design challenge in terms of selecting components and board layout for switching regulators, the LTM8049 also minimizes the PCB footprint and bill of materials needed for generating bipolar supplies. Where efficiency at lighter loads (<~100 mA) is required, the ADP5070/ADP5071 is a better choice. Although the ADP5070 solution requires more external components, like inductors and diodes, it allows for more customization of the power solution. Both the ADP5070 and LTM8049 have sync pins that can be used to synchronize the switching frequency with the clock of an ADC to avoid switching the internal FETs during sensitive time periods for an ADC. The high efficiency of these regulators at a load current of a few 100 mA makes them ideal for precision instrument supplies.

CN-0345 and CN-0385 are two examples of reference designs that implement this solution by using the ADP5070. These designs are for precision multichannel data acquisition using precision ADCs such as the 18-/20-bit AD4003/AD4020. In CN-0345, an LC tank circuit is used to filter the switching ripple from the ADP5070 instead of using an LDO regulator as shown in Figure 1. In reference design CN-0385, positive and negative LDO regulators (ADP7118 and ADP7182) are used after the ADP5070 to filter the switching ripple. An example for powering a bipolar 20-bit precision DAC like the AD5791 with the ADP5070 can be found in the evaluation board user guide here.

When a precision test and measurement instrument needs to be isolated for safety reasons, this brings challenges in delivering sufficient power efficiently across the isolation barrier. In multichannel isolated instruments, channel-to-channel isolation means a power solution per channel. This necessitates a compact power solution that can deliver power efficiently. Figure 2 shows a solution for delivering isolated power with bipolar rails.

The ADuM3470 and LTM8067 allow us to deliver power over the isolation barrier up to ~400 mA at 5 V isolated output with high efficiency. The LTM8067 is a µModule solution integrating the transformer and other components that simplify the design and layout of the isolated power solution while minimizing the PCB footprint and bill of materials. The LTM8067 isolates up to 2 kV rms. For even lower output ripple, the LTM8068 incorporates an output LDO regulator that reduces the output ripple from 30 mV rms to 20 μV rms at the expense of the lower output current of 300 mA.

The ADuM3470 family uses an external transformer to deliver isolated power while also integrating digital isolation channels for data transfer and control of ADCs and DACs. Depending on how the isolation solution is configured, the isolated power output can be followed with a power solution similar to Figure 1, as shown in Figure 2 to generate ±15 V rails on the isolated side from a single positive supply. Alternatively, the ADuM3470 design can be configured to generate bipolar supplies directly without the need for an extra switcher stage. This results in a smaller PCB area solution at the expense of efficiency. The ADuM3470 isolates up to 2.5 kV rms, but the ADuM4470 family can be used for higher levels of voltage isolation up to 5 kV rms.

CN-0385 is an example of a reference design that implements the ADuM3470 solution, as seen in Figure 2. The ADP5070 is used on the isolated side to generate the bipolar ±16 V rails from an isolated 5.5 V. This reference design makes use of the digital isolated channels also included in the ADuM3470. A similar design that uses the ADuM3470 is CN-0393. This is a bank isolated data acquisition system based on the ADAQ7980/ADAQ7988 μModule ADC. In this design, the ADuM3470 is configured with an external transformer and Schottky diode full wave rectifier to generate ±16.5 V directly without the need for an additional regulator stage. This allows for a smaller footprint solution at the expense of lower efficiency. A similar solution is shown in CN-0292, which is a 4-channel data acquisition solution based on the AD7176 ∑-Δ ADC, and CN-0233, which highlights the same isolated power solution of a 16-bit bipolar DAC.

Efficient Step Down with Low Noise

In the power supply scheme shown in Figure 1, an LDO regulator is used to step down from 15 V to 5 V/3.3 V. This is not a very efficient way of generating these low voltage rails. A solution to improve the efficiency of stepping down to lower voltages using the Silent Switcher, μModule regulator LTM8074 is shown in Figure 3.

Figure 3. Power solution for stepping down to lower voltage rails with low EMI

The LTM8074 is a Silent Switcher, µModule step-down regulator in a small, 4 mm × 4 mm footprint BGA package capable of delivering up to 1.2 A with low radiated noise. Silent Switcher technology cancels stray fields generated by the switching currents, thereby reducing conducted and radiated noise. The high efficiency of this µModule device with its very low radiated noise makes it a great choice for powering noise sensitive precision signal chains. Depending on the PSRR of the components connected to the output supply such as amplifiers, DACs, or ADCs, it may be possible to power them directly from the Silent Switcher output without the need for an LDO regulator to further filter the supply ripple as is needed for traditional switchers. Its high output current of 1.2 A also means it could be used to power the digital hardware in a system such as an FPGA if needed. 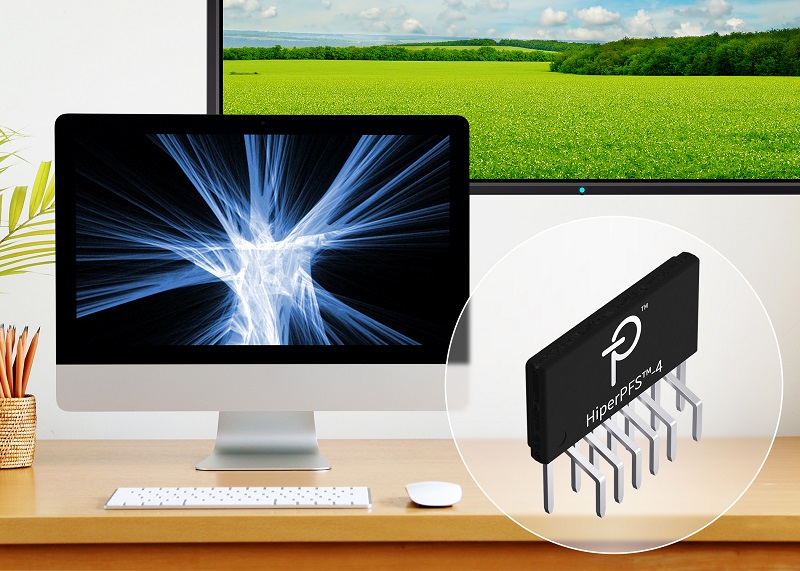 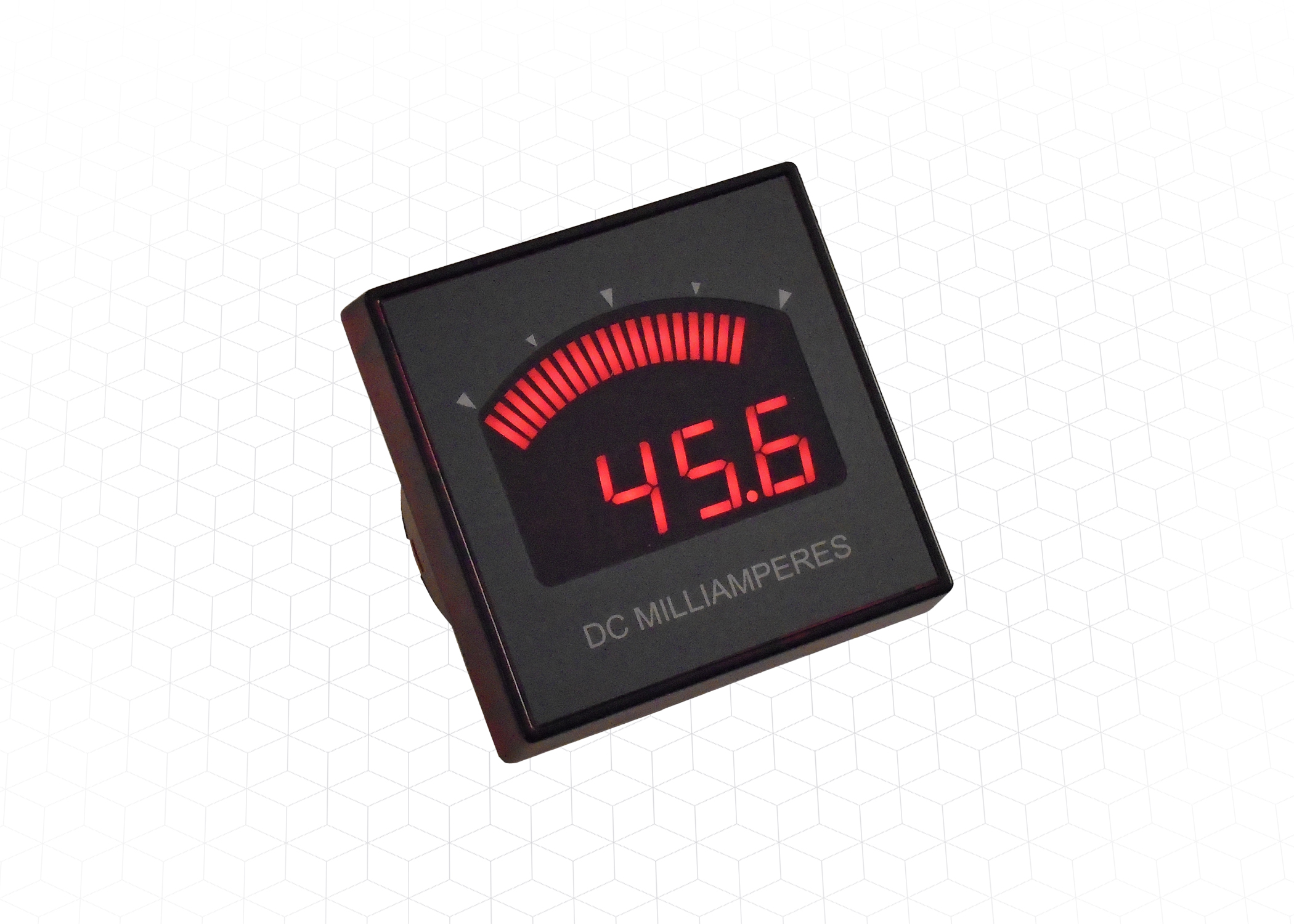