Bipolar Power Supplies Based on the Common Buck Converter

There are applications in automotive and industrial environments that require bipolar, adjustable two terminal power supplies 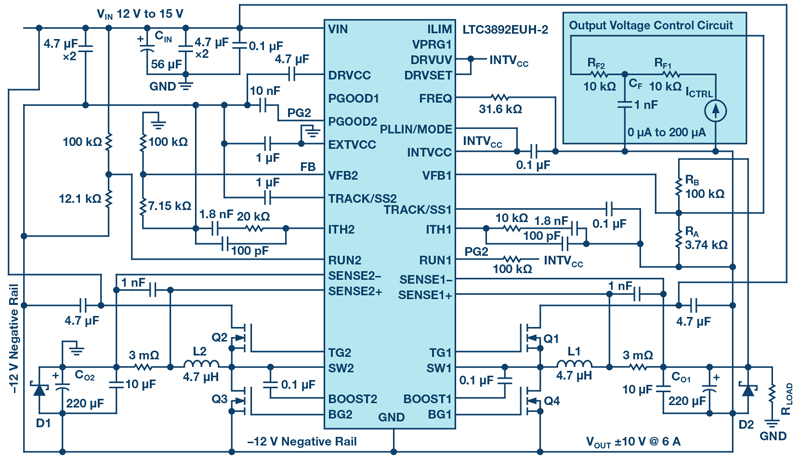 What if an application calls for the same power supply terminal to be positive or negative—a setup where only two terminals are provided to theload? This is not a purely academic question. There are applications in automotive and industrial environments that require bipolar, adjustable two terminal power supplies. For instance, two terminal bipolar power supplies are used in applications ranging from exotic window tinting to test and measurement equipment.

As noted earlier, a traditional bipolar PS produces two outputs using three output terminals: positive, negative, and GND. In contrast, a single output power supply should be equipped with only two output terminals: one GND and another that can be positive or negative. In such applications, the output voltage can be regulated relative to the GND by a single control signal, in the full range from the minimum negative to maximum positive.

There are controllers that are specifically designed to implement the bipolar supply function, such as the LT8714, a bipolar output synchronous controller. Nevertheless, for many automotive and industrial manufacturers, testing and qualifying a specialized IC requires some investment in time and money. By contrast, many manufacturers already have prequalified step-down (buck) converters and controllers, as they are used in countless automotive and industrial applications. This article shows how to use a buck converter to produce a bipolar PS when a dedicated bipolar supply IC is not an option.

Figure 1 shows a buck converter-based solution for a bipolar (two-quadrant) adjustable power supply. The input voltage range is 12 V to 15 V; the output is any voltage in the ±10 V range, adjusted by the control block, that supports loads up to 6 A. The dual output step-down controller IC is the central component to this design. One output, connected per buck-boost topology, generates a stable –12 V (that is, the –12 V negative rail in Figure 1, with its power train comprising L2, Q2, Q3, and output filter CO2).

The –12 V rail serves as ground for the second channel with the controller’s ground pins connected to the –12 V rail as well. Overall, this is a step-down buck converter, where the input voltage is the difference between–12V and VIN. The output is adjustable and can be either positive or negative relative to GND. Note the output is always positive relative to the –12V rail and includes a power train comprising L1, Q1, Q4, and CO1. The feedback resistor divider RB–RA sets the maximum output voltage.The value of this divider is adjusted by the output voltage control circuit, which can regulate the output down to the minimum output voltage (negative output) by injecting current into RA. The application start-up characteristics are set by the termination of the RUN and TRACK/SSpins.

Both outputs function in forced continuous conduction mode. In the output control circuit, the 0 µA to 200 µA current source, ICTRL, is connected to the negative rail as tested in the lab, but it can be referenced to the GND as well. The low-pass filter RF1–CF reduces fast output transients. To reduce the cost and size of the converter, output filters are formed using relatively inexpensive polarized capacitors. The optional diodes D1 and D2 prevent developing the reverse voltage across these capacitors, especially at startup. There is no need for the diodes if only ceramic capacitors are used. 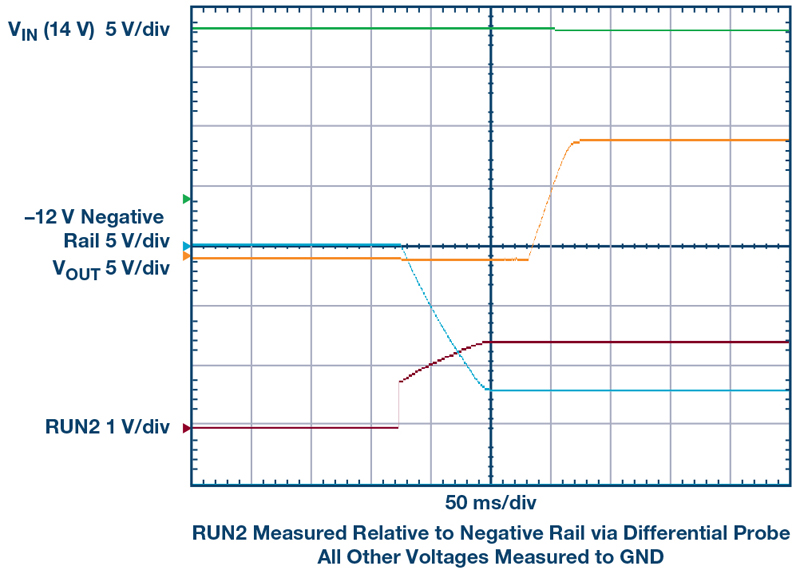 This solution was tested and evaluated based on the LTC3892 and evaluation kits DC1998A and DC2493A. The converter performed well in a number of tests, including line and load regulation, transient response, and output short. Figure 2 shows startup to a 6 A load, with a +10 V output. The linearity of the function between the control current and output voltage is shown in Figure 3. As control current increases from 0µA to 200µA, the output voltage decreases from +10 V to –10 V. Figure 4 shows the efficiency curves. 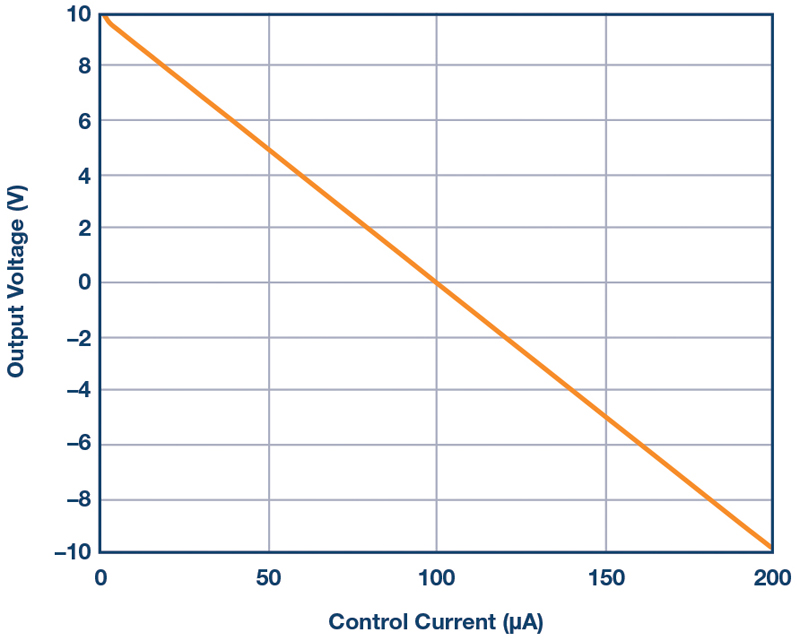 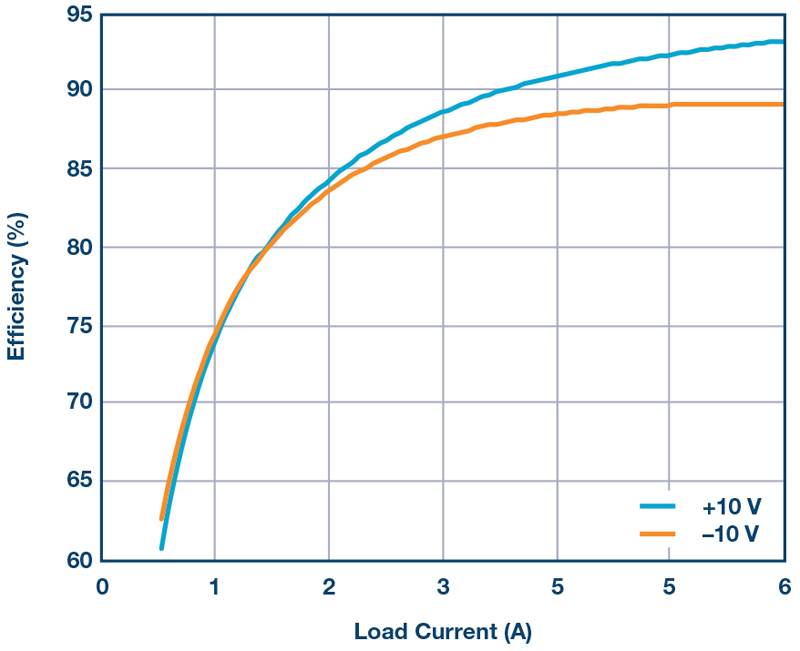 An LTspice model of the bipolar, two terminal power supply was developed to simplify adoption of this approach, allowing designers to analyze and simulate the circuit described above, introduce changes,view wave forms, and study component stress.

This approach is based on the negative rail, VNEG, generated by the buck-boost section of the design.

Where VOUT is the absolute value of maximum output voltage and Km is a coefficient ranging from 0.1 to 0.3. Km limits the minimum duty cycle of the step-down converter. VNEG also sets the minimum value of VIN:

Where VBUCK is the input voltage for the step-down section and thus presents the maximum voltage stress on the converter’s semiconductors:

The duty cycle of the buck-boost section of the PS:

The converter power and input current.

If RB is given, then

where VFB is the feedback pin voltage.

By using the previous equations, we can calculate voltage stress, current through the power train components, and the parameters of the control circuit for the bipolar power supply. For instance, the following calculations are for a supply generating ±10 V at 6 A from a 14V input voltage.

If Km is 0.2, then VNEG = –12 V. Verifying conditions of minimum input voltage VIN ≥ | VNEG |. The voltage stress on the semiconductor’s VBUCK is 26V.

This article presents a design for bipolar, two terminal power supplies. The approach discussed here is based on step-down converter topology, which is a staple of modern power electronics, and thus available in a variety of  forms, from simple controllers with external components to complete modules. Employment of step-down topology gives the designer flexibility and an option to use prequalified parts, which saves time and cost.