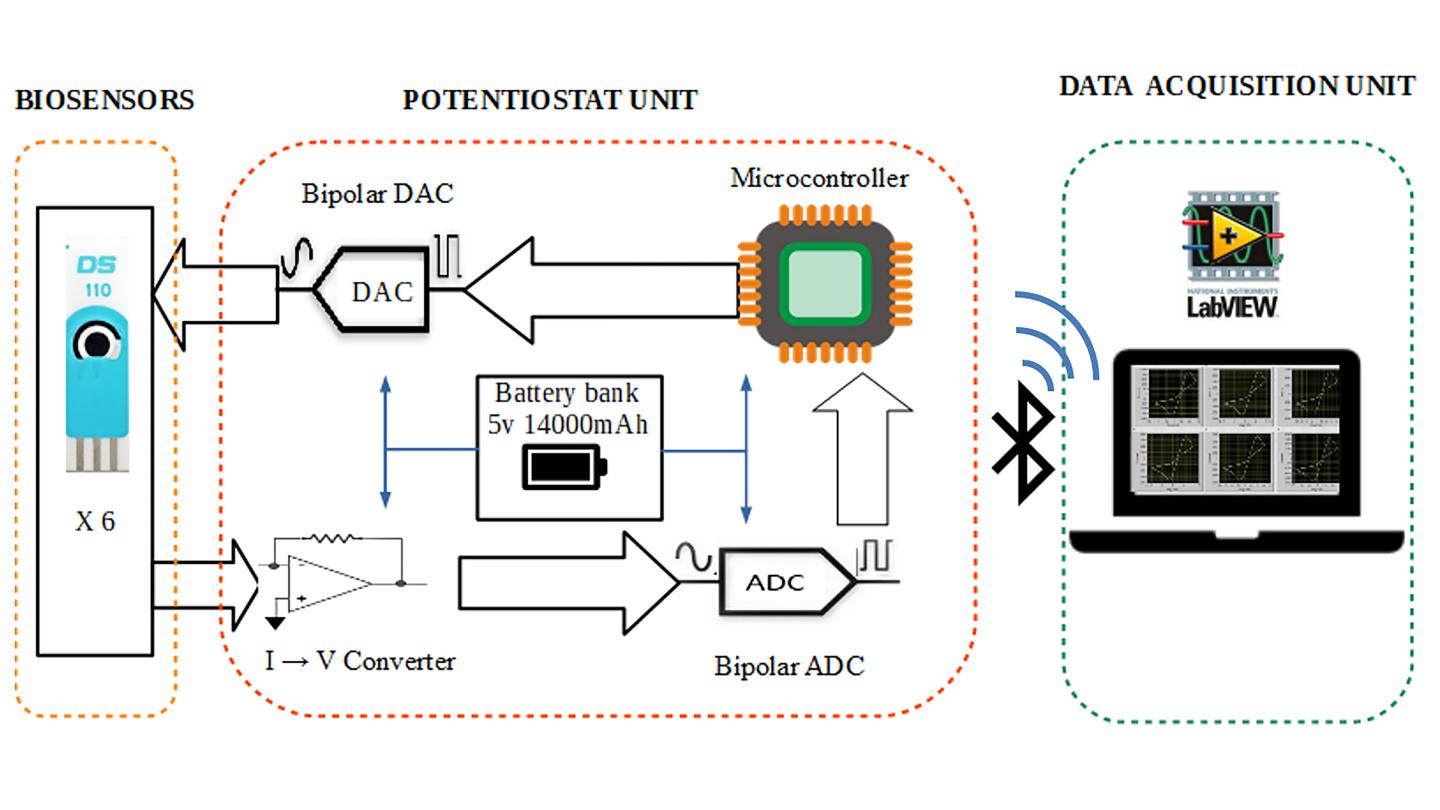 Image courtesy of the authors

Block diagram of the multichannel potentiostat with six 3-electrode biosensors producing data that flows through a printed circuit board and transmits wirelessly to a LabVIEW interface using Bluetooth.

Electrochemical reactions that occur in processes like ethanolic fermentation include the transformation of sugars into alcohol and carbon dioxide. Similar processes occur when the human body breaks down food, drugs or other compounds.

Monitoring these metabolic processes helps in testing, studying and combating disease, but due to the small quantities of liquids involved, they are difficult to study with normal equipment.

Miniaturizing devices with environmental sensing capabilities offers promise for better testing of fermentation and other biochemical processes. The ability to operate the devices wirelessly over long periods of time increases their effectiveness.

In a paper published this week in Review of Scientific Instruments, from AIP Publishing, a miniaturized potentiostat, which controls voltage between electrodes, proved capable of quantifying molecules using voltammetric and chronoamperometric methods with an accuracy above 98%. The wireless device is compatible with most 3-electrode biosensors and can transmit its measurements via Bluetooth for 100 meters.

"One of the novelties of the potentiostat circuit is to be able to process six sensors channels simultaneously without the use of multiplexers, thereby reducing the time spent on each examination," author Saad Abdullah said. "This multichannel potentiostat can examine multiple samples of different concentrations simultaneously and transfer the data over Bluetooth in real time."

The potentiostat was tested to confirm its performance under fixed resistance and quantify the current detection limits and noise in the system, as well as its accuracy and response time. Experiments showed a current detection limit of 180 nanoamperes and a plus or minus 2% standard deviation in cyclic voltammetry measurement. They also conducted an experimental test involving six different concentrations of glucose using a chronoamperometry technique.

In the experiment, the potentiostat was equipped with screen-printed electrodes modified with the enzyme glucose oxidase, which binds with the target protein and acts as an electrochemical channel between the protein and the sensor chip. When a chronoamperometric signal is applied to the sensor chip, an output current is observed in the potentiostat that is equivalent to the concentration of glucose in the sample.

The potentiostat proved capable of operating independently and transmitting data wirelessly for 24 hours in an incubator with accuracy comparable to commercially available devices. The wireless system produced a clear data signal, 180 times stronger than the noise in the circuit. This online method has the added advantage over currently available devices that data from six different biosensors can be viewed simultaneously in real time on an external monitor.