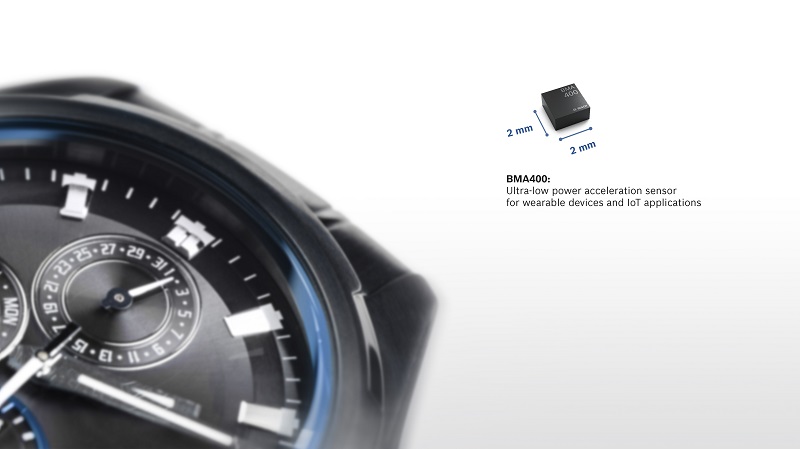 Usually, accelerometers have to choose between low power and high performance. The BMA400 now offers the best of both worlds: its combination of low power consumption, outstanding performance and advanced features is unrivalled by any other device in the market today – by a wide margin.

Due to continuous measurement, the sensor's high-quality measurement signal has precisely defined cutoff frequencies, making it very resistant to vibrations. This is particularly useful in IoT use cases such as smart home security systems, where the BMA400 can distinguish between real alarm situations like broken glass and false signals coming from random vibrations. Therefore, false alarms triggered by vibrations coming from the outside environment, such as construction works, are easily prevented.

Due to its ultra-low current step counter at only 4 µA and intelligent power management features like built-in activity recognition, the BMA400 can effectively help wearable devices such as fitness bands, smart clothes, watches and activity trackers to achieve unprecedented battery life.

To further extend battery life, the BMA400 wakes up automatically only when it detects motion and goes back into sleep mode when the motion recedes. This function finds its use especially in ultra-low-power IoT applications powered by coin cells, i.e. smart window sensors in indoor climate control or security systems.

The small size of only 2.0 x 2.0 x 0.95 mm³ and the integrated plug and play step counter make the new BMA400 acceleration sensor easy to design into various applications. This decreases time-to-market, simplifying the addition of step counting functionalities to new types of wearables such as regular watches and jewelry, to give new products the leading edge.

With its built-in voltage regulator, the BMA400 delivers stable performance over a wide supply voltage range. It offers flexible device tuning for power consumption, noise and ODR (output data rate) parameters. The BMA400 has a current consumption of 14 μA at highest performance, continuous measurement and a noise density of 220 μg/√Hz. This falls to just 1 μA and below in the ultra-low power self-wake-up mode. The new sensor further includes a large FIFO of 1 KB. Further information on the BMA400 can be found in the BMA400 video on the Bosch Sensortec YouTube channel and on the Bosch Sensortec website.