Building the Workforce for the Quantum Age 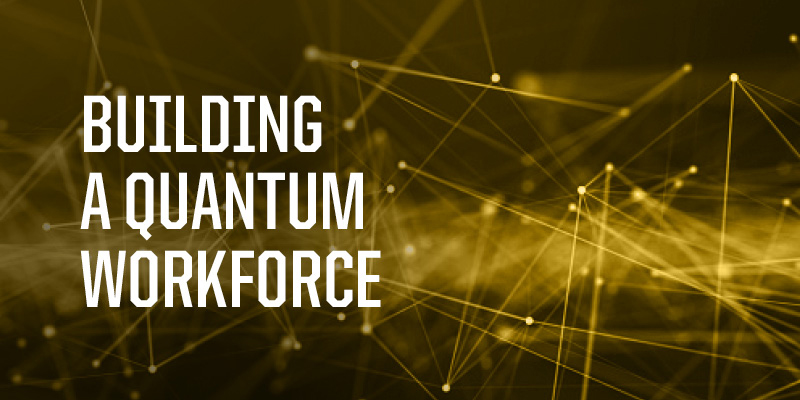 The Stone Age. The Bronze Age. The Iron Age. The Industrial Revolution. Eras tend to be defined by their technology, and humans may be headed for a new one: the Quantum Age.

As the Digital Revolution ushered in an era of computer scientists, software engineers and electrical engineers, the evolution of quantum technology needs human hands and minds to develop it. Engineers and other scientists are needed to develop quantum technologies that could revolutionize the way we communicate, compute and sense the world around us. Toward that end, Purdue University is working to build a quantum workforce, using a diverse array of tools, including an upcoming summer school, online “micromasters” degree, adapted coursework, clubs and seminars.

“Quantum science is not just the next generation of digital technologies; it’s a giant leap forward,” said Yong Chen, the Karl Lark-Horovitz Professor of Physics and Astronomy, professor of electrical and computer engineering and director of the Purdue Quantum Science and Engineering Institute.

Purdue is at the forefront of quantum research and education as a leading university partner of the Quantum Science Center  – a National Quantum Information Science Research Center of the U.S. Department of Energy funded to advance the state of quantum science – and a founding member of the Quantum Economic Development Consortium, a group of stakeholders that aims to enable and grow the U.S. quantum industry.

As a field, quantum science is more than 100 years old, but its applications are just beginning to be understood. Quantum computing, quantum communication and quantum sensing have the potential to revolutionize fields as diverse as cybersecurity, medical imaging, drug development, automotive design, financial modeling, batteries, traffic patterns, solar energy, weather forecasting and even artificial intelligence.

“Quantum has the potential to be revolutionary technology,” said David Stewart, managing director of the Purdue Quantum Science and Engineering Institute. “But right now, there just aren’t enough people to do the work that’s needed. It’s exciting because in the next decade or so there’s such huge potential in this field. The benefits to society and to our national security could be enormous.”

Many people working in the field of quantum today have backgrounds in physics. Training engineers in quantum physics can be a lengthy and intensive process. Purdue is pioneering ways to give engineers and other scientists a workable quantum background quickly, something it is well-positioned to do thanks to its standing as one of the most innovative schools in the country.

“In quantum technology, we are at a similar stage to we were in the 1960s or 1970s developing digital technologies,” said Mahdi Hosseini, an assistant professor of electrical and computer engineering, who is an expert in quantum atomic and optical technology and a part of the Purdue Quantum Science and Engineering Institute. “The first classical transistors and the first processors were capable of doing very simple tasks, and at the time it was unclear where to go next. That’s where we are now with the quantum technologies. We have big challenges in bringing quantum to real-world applications, and most of them are engineering challenges. For example, how do you go from a quantum network to a quantum internet? Or how to scale up quantum computation for real-world applications. These are not things that can be done in the labs and only by physicists. Physicists need help from engineers and vice versa to figure out how the general public is going to benefit from the quantum technology.”

As home to one of the top engineering programs in the country, Purdue is strategically situated to educate both engineers and quantum scientists, something leaders of the Quantum Science Center specifically recognized when they asked Purdue to focus on workforce development. Milind Kulkarni, an associate professor and associate head of teaching and learning of electrical and computer engineering, coordinates instructional efforts, including new online quantum courses that can reach a broad range of audiences at Purdue and beyond, developed by electrical and computer engineering faculty Mahdi Hosseini, Zubin Jacob and Pramey Upadhyaya.

“Purdue is extremely well-positioned to bolster the quantum workforce,” Kulkarni said. “We have people that understand both quantum technology and the physics side, and who can talk to both of those things. We have the scale to really innovate both in research and in the way that we educate people. We’re uniquely qualified, and we have been asked by the Quantum Science Center to carry the torch. I’m excited about what we can do here.”

Alexandra Boltasseva, workforce development lead for the Quantum Science Center and the Ron and Dotty Garvin Tonjes Professor of Electrical and Computer Engineering, emphasizes that the work Purdue is doing is critical.

“We are developing programs to train the next generation of quantum scientists,” Boltasseva said. “Purdue is a core university partner of the Quantum Science Center, and we have a large body of quantum research here. We have a great infrastructure and capacity for creating and conducting education and training events. The more education that’s available, the more people and events students have access to, the more likely they are to connect and spark cross-institutional collaboration, which will lead to future advances. Most innovation happens at the intersection of disciplines, and quantum science and technology is extremely multidisciplinary. Our vision is to equip scientists and engineers from all sorts of different disciplines to participate in the quantum workforce and open more doors for our young people.”