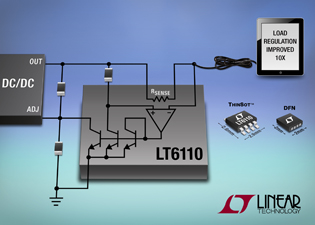 Linear Technology released the LT6110 cable drop compensator, a device that improves voltage regulation at remote loads without the need for Kelvin sense wires. The LT6110, a new component for the designer, has been architected for use with most types of voltage regulators and can provide several volts of load regulation compensation. The LT6110 will compensate for the voltage drop due to resistance in a wire, circuit board trace or cable and can improve regulation at the load by a factor of 10. It operates with supply voltages that range from 2V to 50V, making it suitable for high power USB, Power over Ethernet (PoE), remote instrumentation and remote industrial applications. The LT6110 reduces costs by eliminating sense wires which may be prone to misconnection or damage and it makes load regulation independent of wire size or length. The LT6110 operates by measuring the load current with a sense resistor and injecting current into the existing regulator's feedback loop to raise the output voltage. It is designed to work with standard feedback circuits, as well as new "current source" reference devices such as the LT3080. For load currents less than 3A, the internal 20mOhm sense resistor simplifies the design. Wide bandwidth achieves fast transient compensation of load steps, and in most cases the savings in wire and labor are more than the cost of the LT6110. According to Robert Dobkin, Vice President of Engineering and CTO for Linear Technology, "The LT6110 is a unique power supply component that gives designers a new degree of freedom by improving voltage regulations without the need of sense wires." The LT6110 is fully specified for operation from -40Â°C to 125Â°C and is offered in SOT23 and 2mm x 2mm DFN packages. It is now available, priced starting at $1.29 each in 1,000-piece quantities. Linear Technology