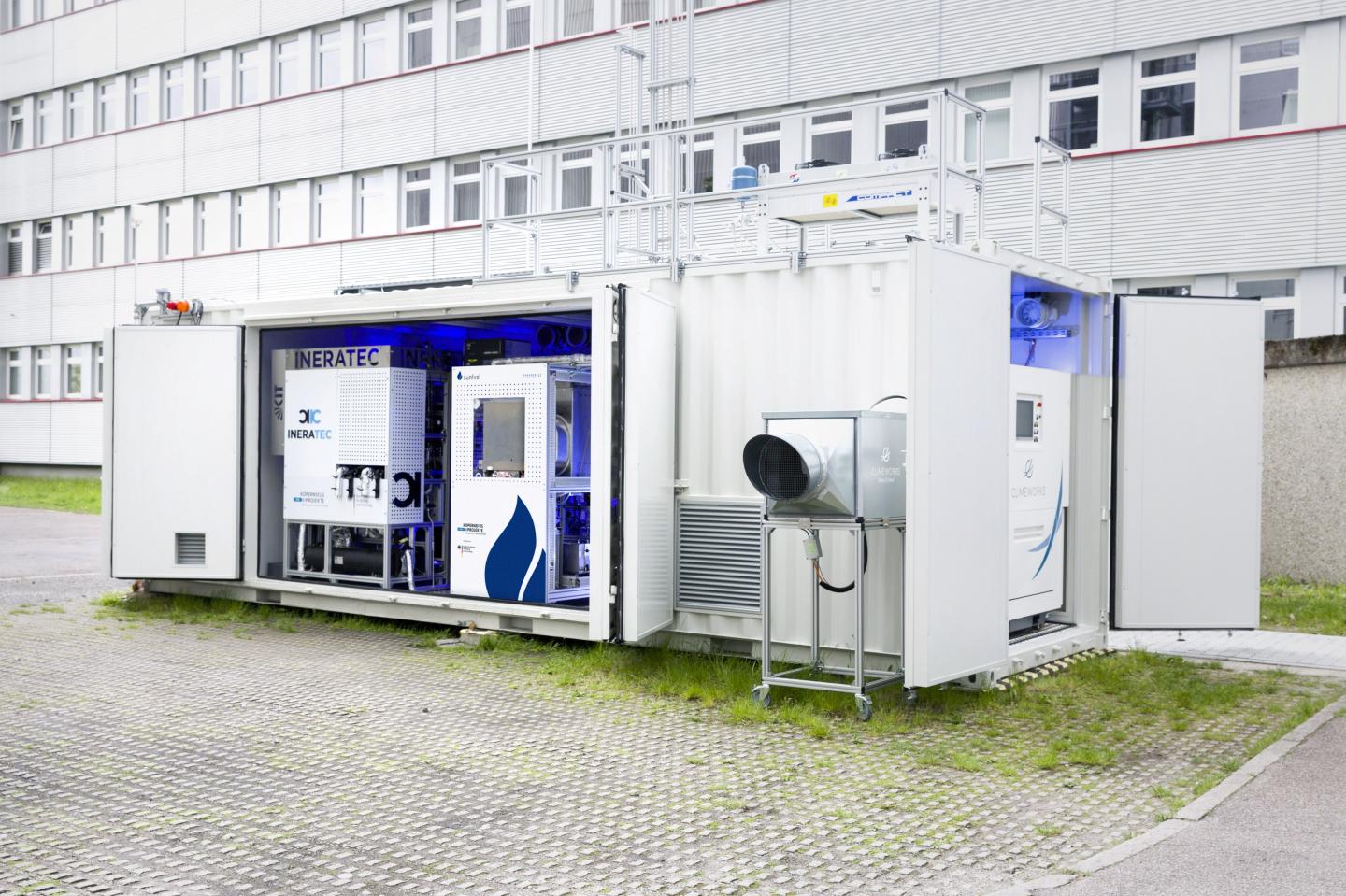 Several challenges associated with the energy transition can be managed by coupling the sectors of electric power and mobility. Green power could be stored in the long term, fuels of high energy density could be used in a carbon-neutral way. Sector coupling has now been demonstrated by the partners of the P2X Kopernikus project on the premises of Karlsruhe Institute of Technology (KIT). The first liters of fuel were produced from air-captured carbon dioxide and green power. For the first time, a container-based test facility integrating all four chemical process steps needed was used to implement a continuous process with maximum carbon dioxide utilization and very high energy efficiency.

"Worldwide, wind and sun supply a sufficient amount of energy, but not always at the right time," says Professor Roland Dittmeyer, KIT, to describe the dilemma of the energy transition. He coordinates the "Hydrocarbons and Long-chain Alcohols" research cluster of the Power-to-X (P2X) Kopernikus project. "Moreover, a few important transport sectors, such as air or heavy-duty traffic, will continue to need liquid fuels in the future, as they have a high energy density." Hence, it is only reasonable to store the so far unused green power in chemical energy carriers.

The project partners Climeworks, Ineratec, Sunfire, and KIT recently combined the necessary chemical process steps in a compact plant, achieved coupled operation, and demonstrated the functioning principle. This combination of technologies promises optimal use of the carbon dioxide and maximum energy efficiency, as mass and energy flows are recycled internally. The existing test facility can produce about 10 liters of fuel per day. In the second phase of the P2X Kopernikus project, it is planned to develop a plant with a capacity of 200 liters per day. After that, a pre-industrial demonstration plant in the megawatt range, i.e. with a production capacity of 1500 to 2000 liters per day, will be designed. That plant may theoretically reach efficiencies of about 60%, which means that 60% of the green power used can be stored in the fuel as chemical energy.

In a first step, the plant captures carbon dioxide from ambient air in a cyclic process. The direct air capture technology by Climeworks, a spinoff from ETH Zurich, uses a specially treated filter material for this purpose. As air passes across them, the filters absorb the carbon dioxide molecules like a sponge. Under vacuum and at 95°C, the captured carbon dioxide releases from the surface and is pumped out.

In the second step, the electrolytic splitting of carbon dioxide and water vapor takes place simultaneously. This so-called co-electrolysis technology commercialized by the technology venture Sunfire produces hydrogen and carbon monoxide in a single process step. The mixture can be applied as synthesis gas for a number of processes in chemical industry. Co-electrolysis has a high efficiency and theoretically binds in the synthesis gas 80% of the green energy used in chemical form.

In a third step, the Fischer-Tropsch synthesis is used to convert the synthesis gas into long-chain hydrocarbon molecules, the raw materials for fuel production. For this, Ineratec, a spinoff of KIT, contributes a microstructured reactor that offers a large surface area on smallest space to reliably remove the process heat and use it for other process steps. The process can be controlled easily, handle load cycles well, and can be scaled up in a modular way.

In the fourth step, the quality of the fuel and the yield are optimized. This process, called hydrocracking, was integrated into the process chain by KIT. Under a hydrogen atmosphere, the long hydrocarbon chains are partly cracked in the presence of a platinum-zeolite catalyst and, thus, shift the product spectrum towards more dircetly usable fuels, such as gasoline, kerosene, and diesel.

Due to its modular character, the process is of great potential. As a result of the low scaling risk, the implementation threshold is far lower than for a central, large-scale chemical facility. The process may be installed decentralized at locations where solar, wind or water power is available.

"Power-to-X" refers to technologies converting power from renewable sources into energy storage materials, energy carriers, and energy-intensive chemical products. Power-to-X technologies enable use of energy from renewable sources in the form of customized fuels for vehicles or in improved polymers and chemical products with a high added value. Within the framework of the government-funded Kopernikus program, a national "Power-to-X" (P2X) research platform was established to study this complex issue. Altogether, 18 research institutions, 27 industrial companies, and three civil society organizations are involved in the P2X project. Within a period of ten years, new technological developments are planned to be developed to industrial maturity. The first funding phase focuses on research into the complete value chain from electrical energy to energy-carrying materials and products.