Smaller and lighter than traditional solar panels, the Roll-Out Solar Array, or ROSA, consists of a center wing made of a flexible material containing photovoltaic cells to convert light into electricity 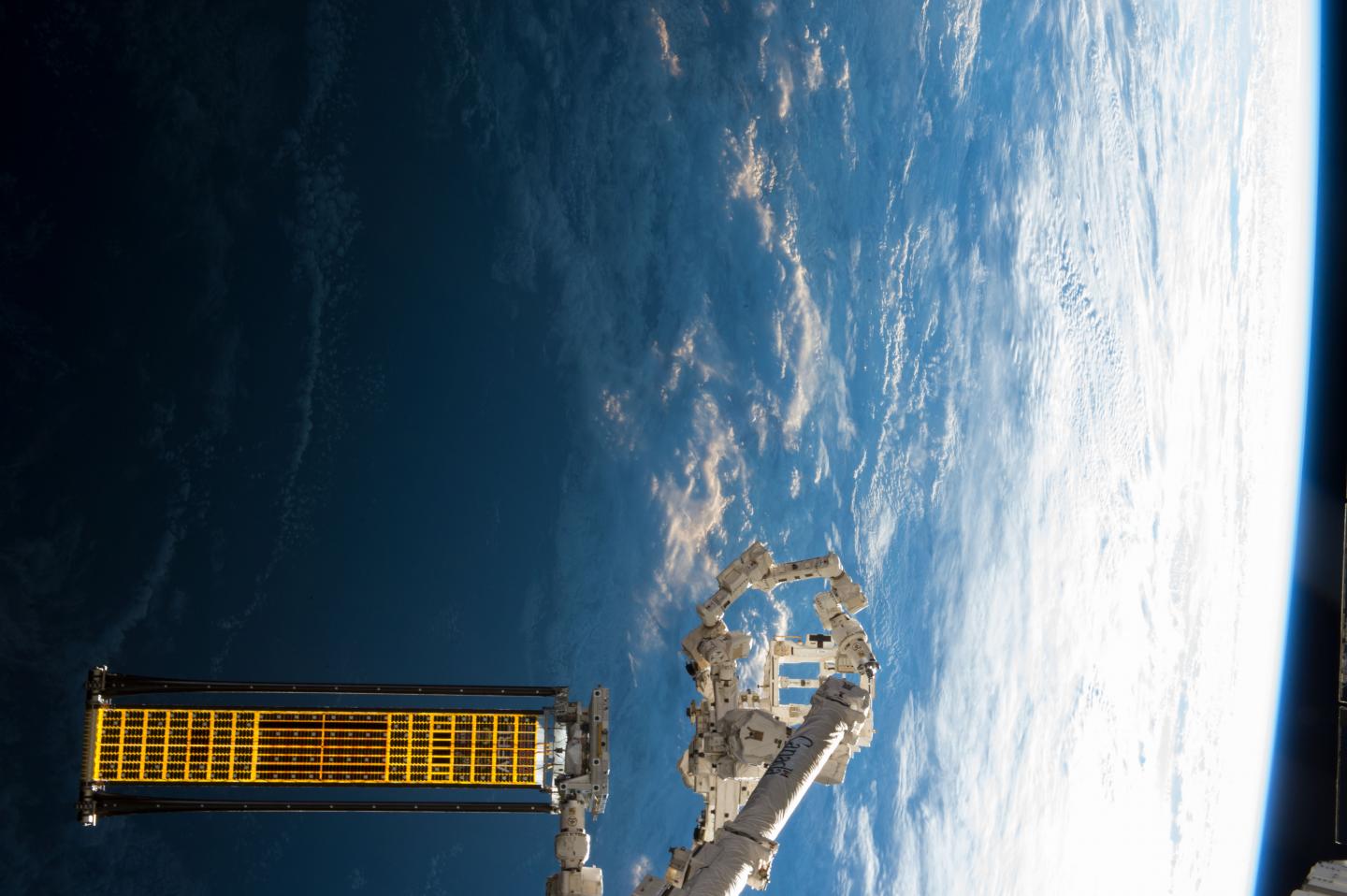 Smaller and lighter than traditional solar panels, the Roll-Out Solar Array, or ROSA, consists of a center wing made of a flexible material containing photovoltaic cells to convert light into electricity.

Traditional solar panels used to power satellites can be bulky with heavy panels folded together using mechanical hinges. An experiment that recently arrived at the International Space Station will test a new solar array design that rolls up to form a compact cylinder for launch with significantly less mass and volume, potentially offering substantial cost savings as well as an increase in power for satellites.

Smaller and lighter than traditional solar panels, the Roll-Out Solar Array, or ROSA, consists of a center wing made of a flexible material containing photovoltaic cells to convert light into electricity. On either side of the wing is a narrow arm that extends the length of the wing to provide support, called a high strain composite boom. The booms are like split tubes made of a stiff composite material, flattened and rolled up lengthwise for launch. The array rolls or snaps open without a motor, using stored energy from the structure of the booms that is released as each boom transitions from a coil shape to a straight support arm.

ROSA can be easily adapted to different sizes, including very large arrays, to provide power for a variety of future spacecraft. It also has the potential to make solar arrays more compact and lighter weight for satellite radio and television, weather forecasting, GPS and other services used on Earth. In addition, the technology conceivably could be adapted to provide solar power in remote locations. The technology of the booms has additional potential applications, such as for communications and radar antennas and other instruments.

The ROSA investigation looks at how well this new type of solar panels deploys in the microgravity and extreme temperatures of space. The investigation also measures the array's strength and durability and how the structure responds to spacecraft maneuvers.

"When the array is attached to a satellite, that spacecraft will need to maneuver, which creates torque and causes the wing, or blanket, to vibrate," explains principal investigator Jeremy Banik, senior research engineer at the Air Force Research Laboratory, Kirtland Air Force Base in New Mexico. "We need to know precisely when and how it vibrates so as not to lose control of the spacecraft. The only way to test that is in space."

The investigation will monitor the array deployed in full sun and full shade and collect data on how much it vibrates when moving from shade to light. This vibration, known as thermal snap, could present challenges in operating satellites with sensitive functions, and the researchers want to learn how to avoid those challenges with ROSA.

"This structure is very thin, only a few millimeters thick, and heats up very quickly, dozens of degrees in a few seconds," Banik says. "That creates loads in the wing that could cause it to shudder. That would create problems, for example, if a satellite was trying to take a picture at the same time."

The investigation will measure power produced by the array to see how ROSA's thin, crystalline photovoltaic cells hold up during launch. In addition, researchers want to see how the array handles retraction.

"We want to show that we can pull the wing back in in a predictable way," Banik says. "A practical reason is that we have to pull it back for stowage after this investigation, but it will be good to know it can be done for future applications, potentially for a highly maneuverable spacecraft."

The intent of this investigation, Banik explained, is to compare on-orbit ROSA data to model predictions previously validated by on-ground measurements in a simulated environment.

"Recognize that we are trying to learn how it behaves - this is an experiment and not a demonstration - so we'll glean useful data even if it doesn't behave the ways we expect," Banik said.

Investigators on the ground will initiate video of deployment and retraction, and sensors embedded on the array will record data on photovoltaic performance, temperature, and accelerations.

"When launching into space, mass and volume are everything, and ROSA is 20 percent lighter and four times smaller in volume than rigid panel arrays," Banik says. "You realize big cost savings from shaving off a little mass and volume, which makes it possible to raise bandwidth on a communications satellite and, for example, make GPS more accessible and reliable for everyone."

In other words, this little array could really change how solar power rolls.